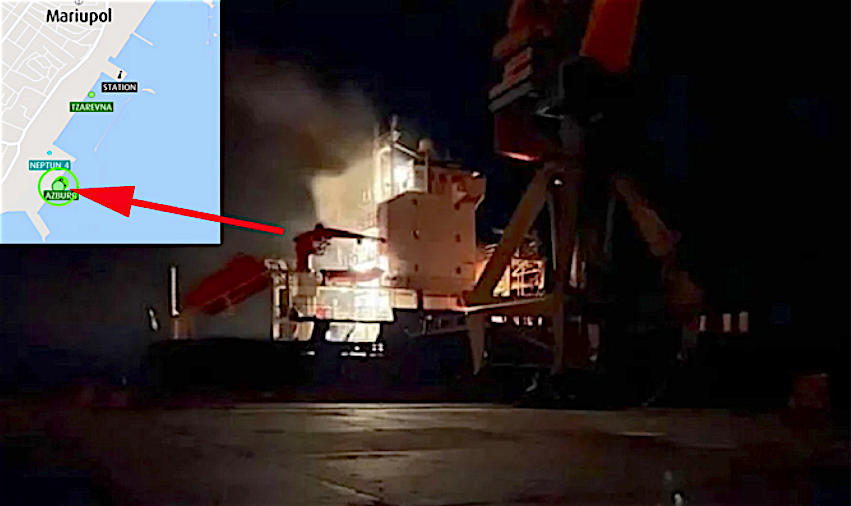 The Azburg was believed to have been without cargo and at berth in Mariupol when it was initially hit by two missiles on April 3, the Dominica Maritime Administration said.

“On April 4, around 2240 LT (local time) the vessel was heavily fired upon by Russian armed forces after intentionally shelling the vessel twice a day earlier,” the registry said in a statement.

“Specific characteristics of firing on the vessel remain unknown, crew reported shelling, bombing and repeated hits by missiles, causing a fire in the engine room.”

One of the 12 crew members required medical treatment while the remaining crew were evacuated onto nearby vessels, the Dominica registry said.

Russian officials did not immediately respond to a request for comment. Moscow has said that it is not targeting civilians in what it calls a “special operation” to demilitarize Ukraine.

Ukraine said this week that it was bracing for about 60,000 Russian reservists to be called in to reinforce Moscow’s offensive in the east, where Russia’s main targets have included Mariupol and Kharkiv, the country’s second-largest city.

He said the registry assumed the sinking would “create some environmental impediments”.

“It certainly will create navigational impediments at the dock and we are certainly concerned,” he told Reuters.

“The indiscriminate shelling of a merchant vessel with a civilian crew with no place to seek refuge is the lowest of lows,” Dawicki added.

Dawicki said the information was received by the vessel’s operator which was in email contact with the crew.

A senior official with Ukraine’s Maritime Administration said earlier on Tuesday that the ship had been hit by a Russian navy missile, according to initial information.

Reuters was unable to independently verify the details of the sinking.

The vessel arrived in Mariupol on February 23 and was unable to leave Ukrainian waters because of the closure of the port, according to British security company Ambrey Intelligence and the registry.

Russia’s military took control of waterways around Ukraine when it invaded on February 24.

Two seafarers have been killed and five other merchant vessels hit by projectiles – which sank one of them – off Ukraine’s coast since the start of the conflict, shipping officials say.

UN shipping agency the International Maritime Organization (IMO) said there were 86 merchant ships still stuck in Ukrainian ports and waters as of March 30, with around 1,000 seafarers unable to sail.

Maritime officials have said supplies are running low onboard the ships, which also face multiple perils including missiles and floating mines.

“As well as the dangers arising from bombardment, many of the ships concerned now lack food, fuel, fresh water, and other vital supplies,” the IMO said.

“The situation of the seafarers from many countries is becoming increasingly untenable as a result, presenting grave risks to their health and wellbeing.”

Ukrainian President Volodymyr Zelenskiy said on Tuesday Ukraine’s efforts to push back Russian troops from Mariupol were facing difficulties and the military situation was “very difficult”.

The Commonwealth of Dominica Maritime Administration (DMA), the ship’s flag registry, has condemned the sinking of the vessel.

While at berth in the port of Mariupol on April 3, Azburg was hit by two missile shells.

Russian armed forces had fired upon the ship after ‘intentionally’ shelling it two times a day previously, stated DMA.

The crew reported that shelling, bombing and repeated hits by missiles led to a fire in the engine room.