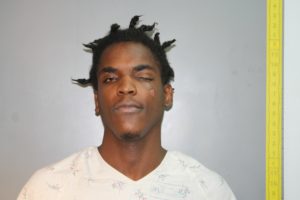 IN CUSTODY: Samuel “Ghost” Roberts is escorted by an unidentified police officer on St. Croix on Tuesday.

Roberts has been actively sought by police for five months — but has been able to elude the Virgin Islands Police Department since early February.

Police said the arrest took place at Paradise Mills housing community after residents told them a burglary suspect was staying in an abandoned building there.

St. Croix officers went to the abandoned building and found a black man lying on a couch inside.

Police then called for backup to try to seal off all the exits in the building.

Roberts tried to escape, but when he saw that he was surrounded by police, he tried to barricade himself inside the building.

There was a brief standoff with police, but soon afterwards Roberts surrendered without incident.

He is wanted for the Jan. 31 murder of McDonald Samuel in Lorraine Village.

Roberts is charged with first-degree murder. He was remanded to the Golden Grove Detention Center pending an advice of rights hearing.