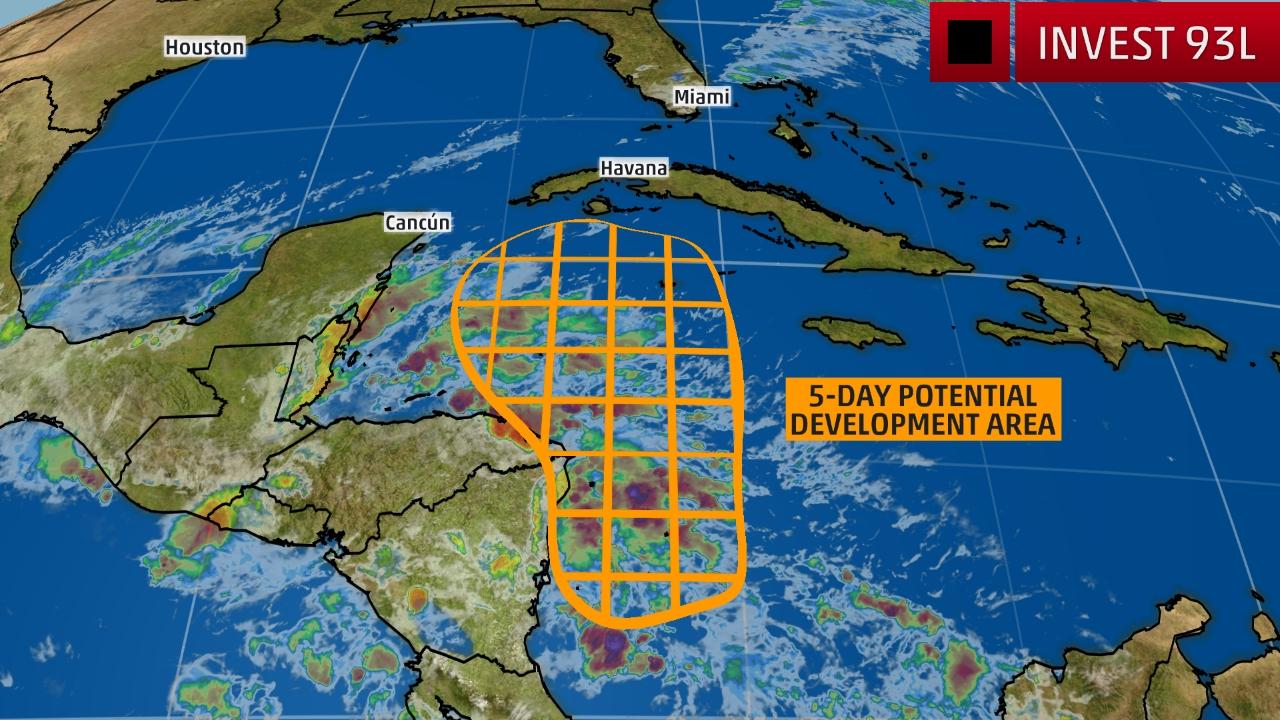 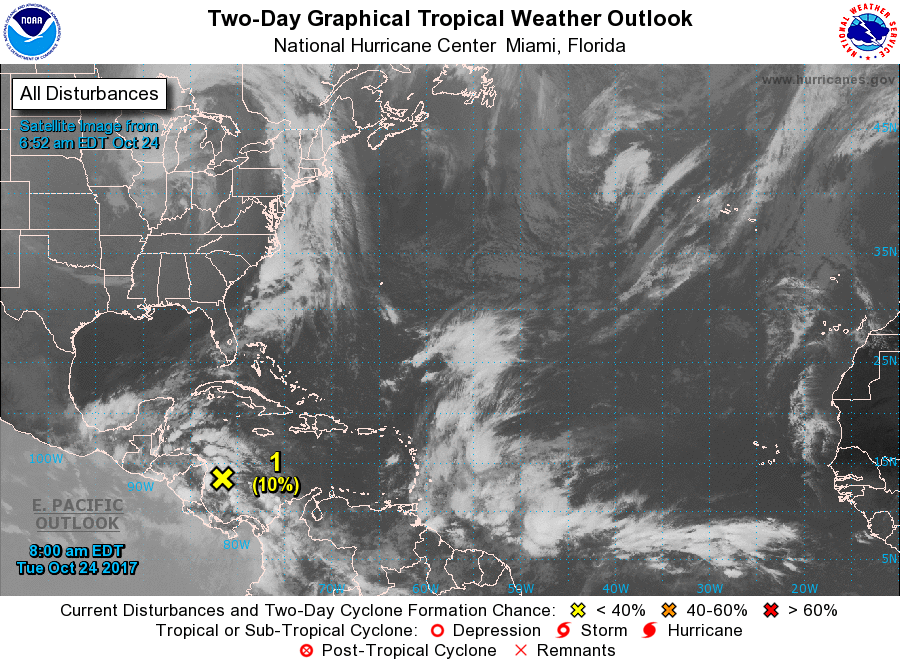 MIAMI — A broad area of low pressure in the western Caribbean could develop into a tropical depression or storm this week, but will first soak parts of Central America with locally heavy rain.

The National Hurricane Center (NHC) has highlighted a portion of the western Caribbean for a medium chance of tropical development during the next five days.

Those odds could increase or decrease later this week depending on the evolution of atmospheric ingredients near this region.

This system has been dubbed Invest 93L by the NHC which is a naming convention used to identify features that are being monitored for possible tropical development.

Invest 93L is currently disorganized but is producing showers and thunderstorms near Central America.

In the near-term, a cold front and the broad area of low pressure may contribute to a heavy rain threat in southern Mexico and Central America. The downpours could eventually lead to flooding and mudslides. 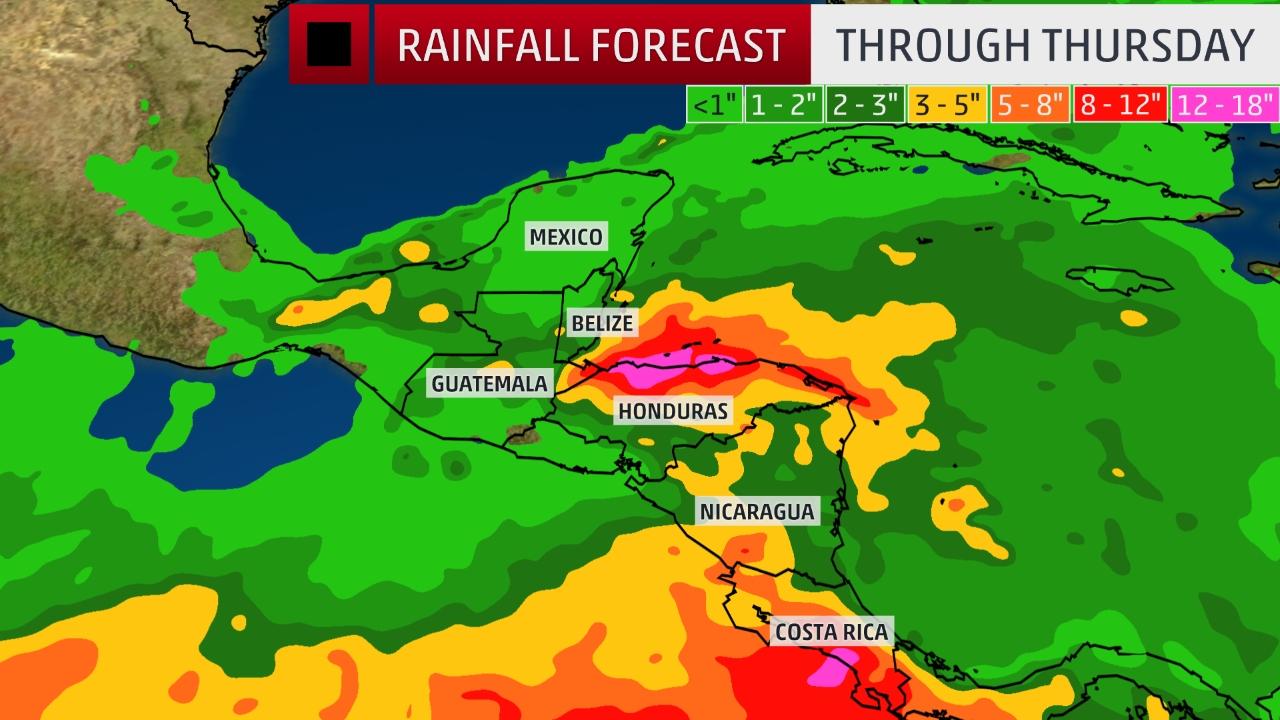 Ocean temperatures continue to run one to three degrees above average, or in the mid-80s, across the majority of the Caribbean Sea, which is plenty supportive for tropical growth and development. Land interaction; however, is currently a hindrance to its ability to organize.

A well-defined circulation center with collocated shower and thunderstorm activity is needed for a tropical depression or storm to develop. There are no signs of that happening at the moment, but we will be monitoring it for potential organization later this week.

The area of disturbed weather will get drawn north and then northeastward by a southward dip in the jet stream that will sweep through the central and eastern states late this week into the weekend.

As a result, the area of low pressure or a moisture surge associated with it could get pulled toward Cuba or South Florida by this weekend.

The main impact from this system in those areas at this time appears to be heavy rainfall and possible flooding, but check back with weather.com for updates and possible changes to this forecast. 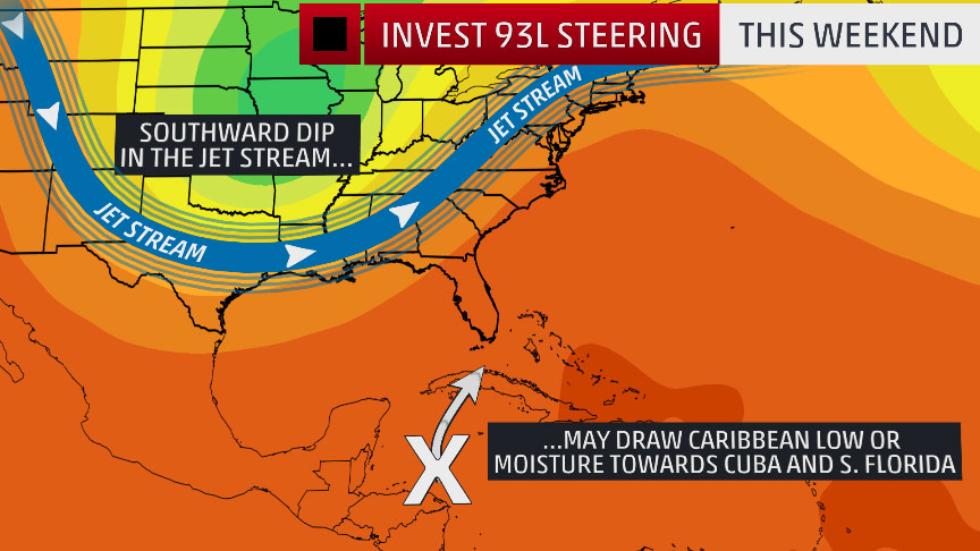 You’ll note in the chart below that there is a strong clustering of dots in the southwestern and northwestern Caribbean Sea. This is a hotbed of tropical origins that we’ll be watching through the end of October and into November.

As the season begins to wind down, the warmest waters – 80 degrees and above – in the Atlantic Basin will recede to the Caribbean, Gulf of Mexico and far western Atlantic while wind shear and dry air generally increase across the basin.

November sees one more tropical storm or hurricane, on average, according to the National Hurricane Center. More than 7 percent of the season’s activity is yet to come in terms of average Accumulated Cyclone Energy (ACE), a metric used to measure wind energy produced by tropical cyclones.

These cyclones typically move northeastward from the Caribbean or western Atlantic ahead of sweeping cold fronts from North America. These systems can threaten Florida, Cuba, the Bahamas and Bermuda but can occasionally threaten areas closer to the U.S. East Coast, especially in October and early November.

Otto was the latest hurricane landfall in the Atlantic Basin since at least 1851, and it took a strange path westward through Nicaragua and over Central America into the eastern Pacific. This landfall in Central America was the farthest south a landfall has taken place on record.

A meteorological and climatological oddity, Sandy made landfall in New Jersey on Oct. 29 as a very large post-tropical cyclone in a complex arrangement of large-scale weather systems in the Atlantic and over the eastern United States.

Let’s not forget that Sandy started a fairly normal late-October or November track from the Caribbean, over Cuba and into the western Atlantic. 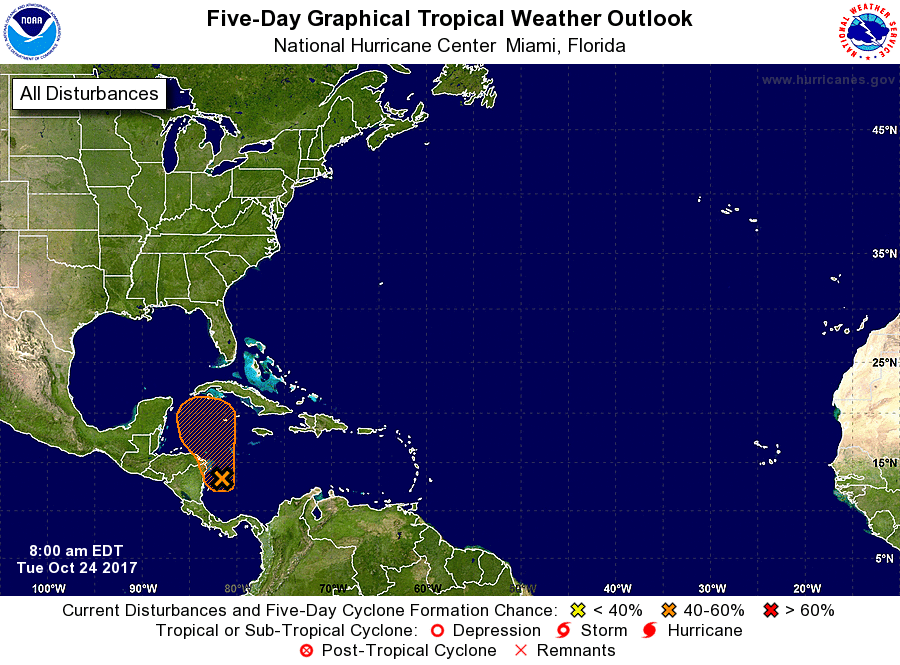