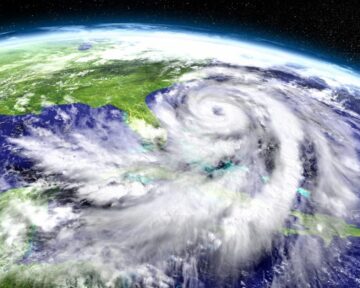 MIAMI — A new, Yale-led study suggests the 21st century will see an expansion of hurricanes and typhoons into mid-latitude regions, which includes major cities such as New York, Boston, Beijing, and Tokyo. Writing in the journal Nature Geoscience, the study’s authors said tropical cyclones — hurricanes and typhoons — could migrate 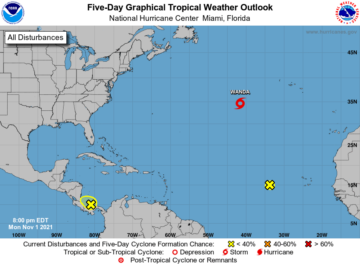 MIAMI — Tropical Storm Wanda formed over the Atlantic Ocean today — and while it isn’t expected to make landfall, it’s still making history. For only the third time ever, forecasters have run out of the typical alphabetical names for storms, forcing them to seek an additional naming system for 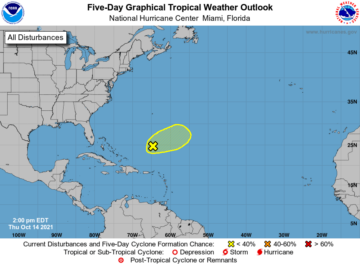 MIAMI — There’s a low pressure system located northeast of the Turks and Caicos, but tropical development is unlikely due to the presence of storm-shredding wind shear, the National Hurricane Center said. The system has brought heavy rain to areas in the Caribbean for several days. It is expected to 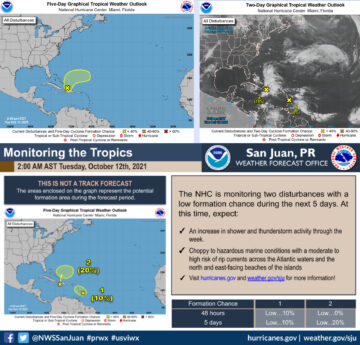 MIAMI — We still have two X’s on the board, but we don’t expect either of them to amount to much of anything. Disturbance #1 is passing over the mountains of Haiti and the Dominican Republic. Heavy rain in the high terrain is the primary threat. The disturbance is interacting 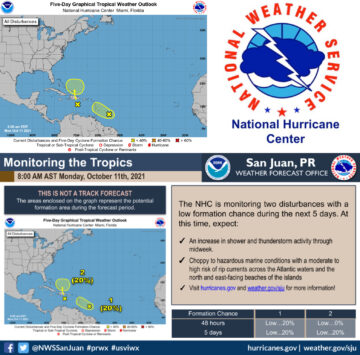 MIAMI — Activity in the Caribbean is on the rise again, with forecasters monitoring two areas for potential development as a third peters out. A tropical wave located east-southeast of the far eastern Caribbean is forecast to move in the general direction of the Bahamas this week. It is expected

CHARLOTTE AMALIE — Forecasters are monitoring “a vigorous tropical wave” located about 500 miles east-southeast of the Windward Islands, the National Weather Service said today. The tropical wave is producing a concentrated area of cloudiness and thunderstorms near the wave axis, according to the NWS. Environmental conditions are forecast to

MIAMI —Hurricane Sam devolved over the weekend and continues to push north, meanwhile the National Hurricane Center is keeping an eye on Tropical Depression Victor. Located over the southeastern Bahamas near southwestern Atlantic waters is a large area of disorganized cloudiness and showers associated with a surface trough that has a 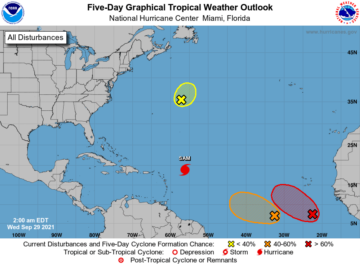 As Hurricane Sam Exits Stage Left, Victor And Wanda Are Waiting In The Wings

MIAMI — Hurricane Sam went through a weakening spell yesterday when an internal process collapsed the storm’s eyewall and a new larger one formed. Now the new one is contracting, Sam is re-strengthening and the overall system has grown in size. It’s a normal process in strong hurricanes. In fact, 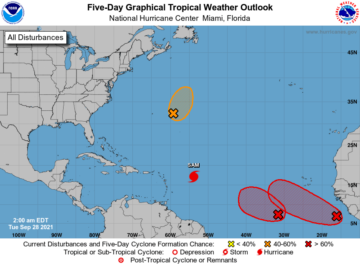 CHRISTIANSTED — Hurricane Sam continued to feed on warm water as a powerful Category 3 storm with some partners likely to join it in the Atlantic basin in the form of three other disturbances. The seventh hurricane of the year has maximum sustained winds of 120 mph and is stumbling 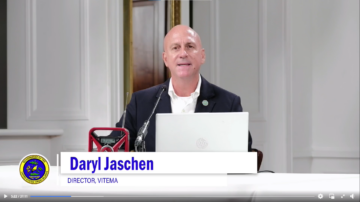 Hurricane Sam Has Only A 3% Chance To Strike St. Thomas Or St. John: VITEMA Says