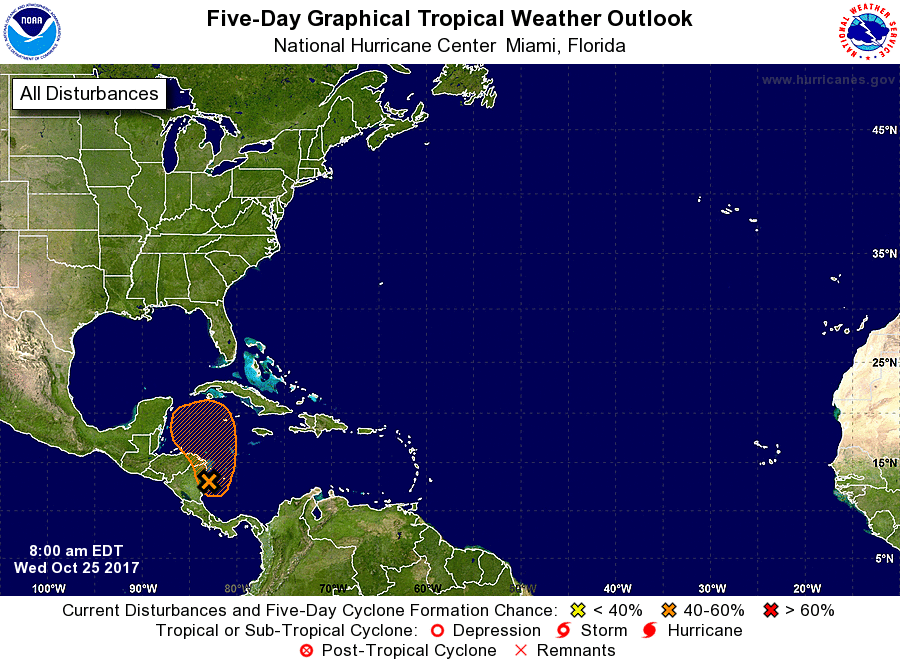 MIAMI — The 2017 Atlantic hurricane season might not be over yet.

An area of showers and thunderstorms now spinning in the western Caribbean has a 50 percent chance of developing into Tropical Storm Philippe by the weekend, the National Hurricane Center said.

The disturbance is likely to drift across the northwestern Caribbean into Friday, then across the Florida Straits and part of South Florida on Saturday, according to AccuWeather meteorologist Dan Kottlowski.

On Sunday, it’s likely to take a path parallel to the Atlantic coast of the U.S., he added.

Heavy rain, strong winds and the risk of flash and urban flooding will race northward from the Carolinas to the mid-Atlantic and New England on Sunday.

Some computer models predict the system will reach tropical storm strength of 39 mph, but none expect it to become a hurricane, which occurs when winds reach 74 mph.

The western Caribbean is a hot spot for hurricane development in October, with notorious storms such as Wilma in 2005 and Mitch in 1998 forming there, University of Miami meteorologist Brian McNoldy told the Capital Weather Gang.

As the season begins to wind down, the warmest waters — 80 degrees and above — in the Atlantic Basin will recede to the Caribbean, Gulf of Mexico and far western Atlantic, the Weather Channel said.

Philippe would be the 16th named tropical storm or hurricane of the season, a catastrophic year that’s brought death and destruction from monsters such as Harvey, Irma and Maria.

A typical season, based on data from 1981-2010, has 12 named storms, according to Colorado State University.

Hurricane season officially ends November 30. November is typically a quiet month, however, with only one hurricane forming every three years in the Atlantic.