UNITED NATIONS REPORT: U.S. Virgin Islands Is The New Murder Capital of the Caribbean … And Fourth Overall in the World

CHARLOTTE AMALIE — The U.S. Virgin Islands has the fourth highest murder rate in the world, according to a study done by the United Nations Office on Drugs and Crime (UNODC).

Only El Salvador, Honduras and Venezuela have more murders per capita than the U.S. Virgin Islands, according to the latest statistics from the UNODC.

“Apparently, all else being equal, you have a one in 2,000 chance of being murdered,” the Virgin Islands Free Press’ crime expert said. “Not a large probability. But, imagine if that were the odds of dying in a plane crash every flight — nobody would be flying — that is for certain.”

Another six Caribbean countries made the rankings in top 20 — including Trinidad and Tobago, Anguilla and St. Lucia.

“Nearly one in three said they had lost someone to violence. Guns are used about twice as often in robbery and three times as often in assault in the Caribbean as compared with the global average,” the UNODC report said. It also found that almost half of all crimes go unreported to the police.

In terms of murder rates, as measured by the United Nation’s Office on Drugs and Crime (UNODC), three of the top 10 for most murders per 100,000 inhabitants were Caribbean islands.

A study published last year by the Interamerican Development Bank warned that while non-violent crime in the region was low, violent crime rates “are among the highest in the world.”

The U.S. Virgin Islands had 51 official murders in 2017, not including one vehicular homicide.

The Federal Bureau of Investigation (FBI) said the U.S. Virgin Islands had the highest murder rate in the United States per capita in 2016 (see article below). 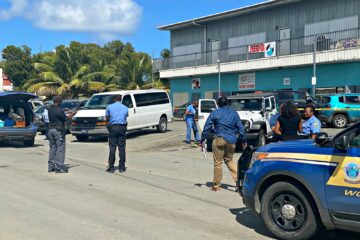 USVI Murder Rate Drops 6.42% In 2 Years … But It Still Moves Up 1 Spot In World Per Capita Homicide Rate

UNITED NATIONS REPORT: U.S. Virgin Islands Is The New Murder Capital of the Caribbean … And Fourth Overall in the World