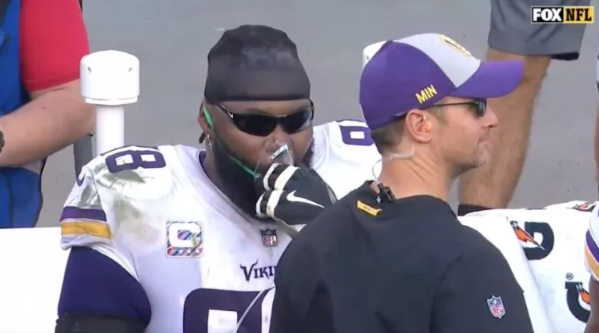 PHILADELPHIA — Linval Joseph whipped out the sunglasses, sat on the bench and pulled on the oxygen mask .

Kirk Cousins threw for 301 yards and one touchdown, the 330-pound Joseph returned a fumble 64 yards for a score and the Minnesota Vikings beat the Philadelphia Eagles 23-21 Sunday in a rematch of last season’s NFC championship game.

“I love seeing Linval on the sideline in his glasses after plays. They have a lot of fun,” Cousins said.

St. Croix’s Joseph started off Sunday’s Week 5 showdown between the Vikings and Eagles fired up as a member of a defense that has not played up to its potential this season.

Joseph snatched Wentz’s fumble out of the air and rumbled the distance to give the Vikings a 10-3 lead in the second quarter. Stephen Weatherly knocked the ball loose and Wentz couldn’t recover to catch Joseph from behind after the strip-sack.

Not bad for a nose tackle.

The game started slow for both teams with the kickers being featured. Both the Vikings and Eagles had first half field goals to have the game locked up at 3-3, but Dan Bailey of Minnesota missed two of his three attempts.

So far this season it has been rough sailing for the Vikings, who are winless in their last three games (0-2-1) after a season-opening win against the San Francisco 49ers. A large part of it has to do with an usually-porous defense and a running game that has been unable to get going. Cousins and the offense, which is coordinated by former Eagles quarterbacks coach John DeFilippo, have had to throw the ball quite a bit due to early deficits in games.

The Eagles have been up and down to start the year with a record of 2-2. They had a season-opening win over the Atlanta Falcons with Super Bowl-winning quarterback Nick Foles at quarterback before their starter, Wentz returned to action in Week 3. Their most recent game came at the hands of the Tennessee Titans in an overtime loss on the road.

The Vikings (2-2-1) got an excellent performance from Cousins, who completed 30 of 37 passes, to avoid falling further behind in the NFC North. Cousins became the first player in NFL history to complete at least 30 passes in four consecutive games.

The Vikings will be back in action in Week 6 at home against the Arizona Cardinals, while the Eagles will play on Thursday Night Football on a short week against the New York Giants.