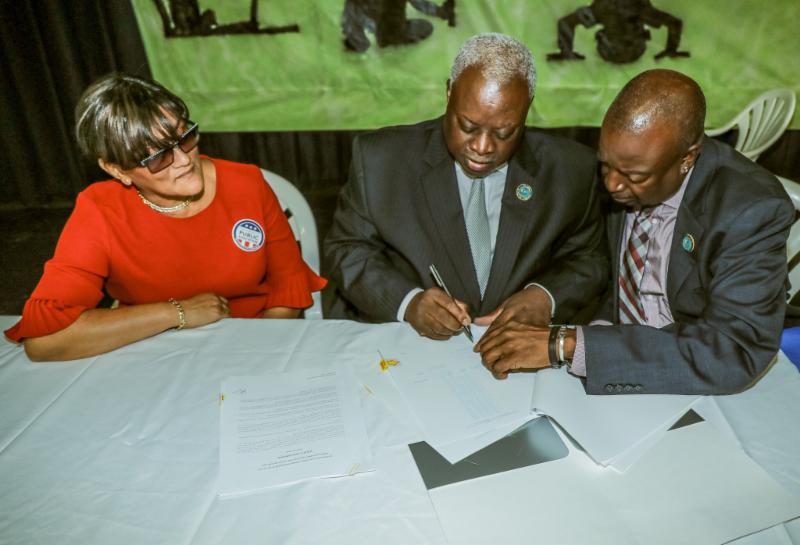 The agreement was reached between the St. Croix and St. Thomas-St. John Federation of Teachers – AFT Locals 1825 and 1826 – and the Government of the Virgin Islands on October 12, 2018 following weeks of intense negotiations.

Joined by Lt. Governor Osbert Potter and St. Croix Federation of Teachers President Rosa Soto-Thomas, Governor Mapp signed the agreement Friday to the applause of AFT members attending the 2018 TEACH conference held at the St. Croix Educational Complex High School. The annual gathering brings teachers together for a day of workshops and presentations that celebrate and reinforce the profession of education.

“I want to thank you for your service, commitment and dedication to the children of the Virgin Islands,” Mapp said before signing the important agreement. He acknowledged that some conditions under which teachers work are not ideal, saying, “We are working to make that better.”

The two teachers’ unions ratified a contract with the government after years of protests and calls for higher pay and better working conditions for the territory’s teachers.

“It’s been a long and challenging process, but perseverance prevailed and I’m happy for all of the AFT members, to include teachers, support staff and paraprofessionals,” according to a statement from the territory’s Chief Negotiator Natalie Tang-How. “They stayed the course and the government has done its part to preserve the integrity of the process, while ensuring higher wages and a better quality of life for the people.”

Mapp further outlined four areas his administration prioritized as it relates to teachers and government employees when he took office in January 2015: Unpaid portions of AFT members’ 2010 collective bargaining agreement, low entrance wages for new teachers, an 8 percent pay cut that was unlawfully enacted on government employees in 2011, and higher retention wages for senior-level educators.

“We have addressed all four of those issues,” the Governor said, pointing out that in 2016, the Mapp-Potter Administration satisfied the outstanding portions of the teachers’ 2010 collective bargaining agreement; in 2017, Mapp offered legislation to return the eight percent wage reduction to government employees; on July 28, 2018, the administration successfully increased the base pay for new teachers and qualifying government employees by $10,000, raising entrance wages for new teachers to $44,000; and, most recently, a two-year contract that would bring teachers up to the current pay schedule was ratified between the AFT and the Government of the Virgin Islands.