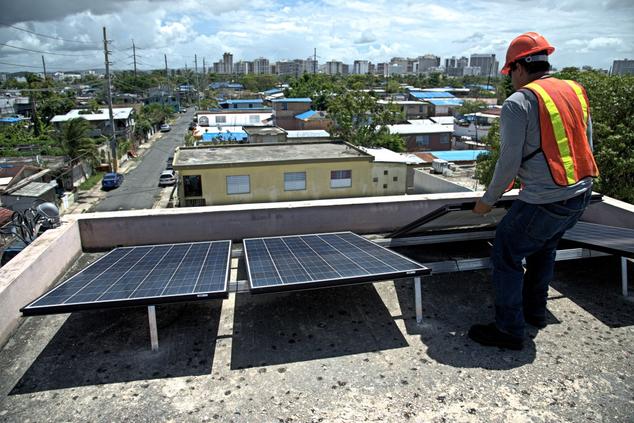 WASHINGTON — Legislation recently introduced in Congress would establish a grant program for the U.S. Virgin Islands and Puerto Rico to fund development of renewable energy resources, microgrids and energy storage.

The bill aims to improve the electric system on the two island territories. the U.S. Virgin Islands and Puerto Rico which are still struggling to recover from Hurricane Maria. Maria hit the islands in September 2017 and caused the largest blackout in U.S. history. It killed at least 3,000 people in Puerto Rico alone.

The legislation calls for the U.S. Secretary of Agriculture to establish a grant to fund the development and construction of new renewable energy projects, energy storage systems, smart grid or microgrid projects, and energy efficiency programs. The funds could not be used for fossil fuel or nuclear power projects.

In addition, under the legislation the energy secretary would ensure that the Department of Energy’s national laboratories provide technical assistance to entities carrying out projects under the grant program.

The bill does not specify the amount of the grant, but calls for the appropriation of $1.5 million for the U.S. Comptroller General to conduct a study on the potential for modifying the electric systems of Puerto Rico and the Virgin Islands to use renewable energy sources, to expand the use of microgrids and to improve energy resiliency.  A study would be conducted 180 days after the bill’s enactment.

Renewable energy and microgrids have played an important role as Puerto Rico works toward restoring and improving its devastated electric power system. In remote areas, groups such as Blue Planet have installed solar arrays and batteries to create microgrids that can be used to power water pumping stations.

And the island’s utility, the Puerto Rico Electric Power Authority, or PREPA, has proposed the creation of eight minigrids to replace the more vulnerable centralized grid system that was in place before Maria struck.

The eight minigrids would be interconnected and act as a kind of large microgrid. The mingrids would have the ability to operate independently during a disaster, potentially sparing the island from a massive blackout.

PREPA’s plan also calls for the creation of smaller microgrids within the minigrids, particularly in remote areas of the island not easily served by transmission lines, along with installation of up to 1,100 MW of battery storage over the next four years. If successful, Puerto Rico would have more battery storage than is now installed in the entire United States, 1,031 MW, according to Bloomberg New Energy Finance.