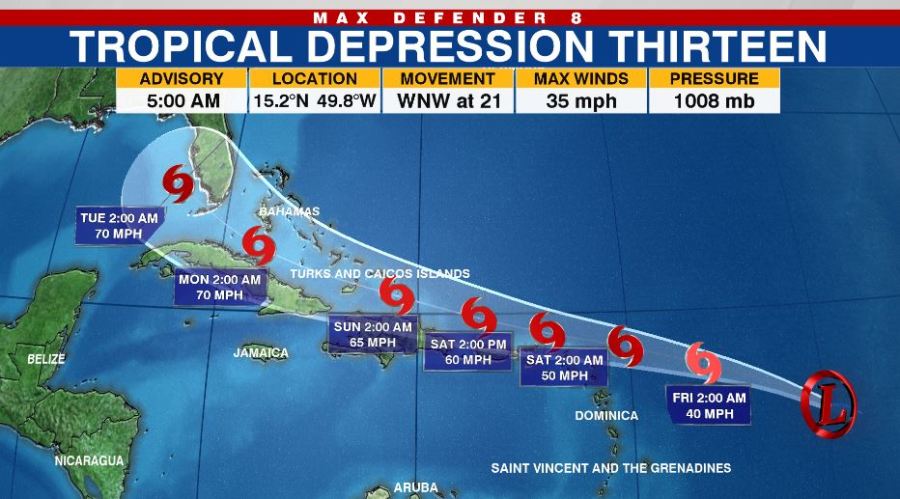 MIAMI — As Tropical Depression 13 continues to spin on a forecast track north of the U.S. Virgin Islands, a second tropical depression formed this morning in the Caribbean with a path projected towards the Texas coastline, the National Hurricane Center said in its 11 a.m. update.

As of 11 a.m. today, Tropical Depression 13 is east of the Caribbean islands and is moving toward the west-northwest near 21 mph. It is currently near 16.0 degrees North latitude, 52.0 West longitude. This motion is expected to continue for the next few days.

At the 11 a.m. NHC update, Tropical Depression 13 was about 1,035 miles east-southeast of the U.S. Virgin Islands. The depression, with top winds of 35 miles per hour, is tracking west-northwest at 21 miles per hour.

If it does strengthen, it will take on the name Laura. TD 13 is expected to move north of the U.S. Virgin Islands and Puerto Rico on Saturday.

TD 13 was expected to develop into the thirteenth depression of the 2020 season earlier in the week, but dry air prevented it from doing so. That same dry air is relinquishing its grip, giving TD 13 breathing room to grow, said FOX 35 meteorologist Jayme King.

“If it wasn’t for the dry African air, we’d probably have a major hurricane on our hands.” King said. “There’s a potential for this thing to ramp up.”

While projections show the storm heading toward Florida sometime next week, there’s still a lot that could influence the storm and spare the Sunshine State, King said.

“It’s still a lot of days out for us to assess the local impact. There’s a lot of uncertainty in the track,” King said. “But one thing we can say is it’s adjusted more to the south and this trend could continue. High pressure near Bermuda could be a factor guiding this system, any high fluctuation will be the ultimate factor in this thing gaining latitudes and affect Florida as a strong tropical storm or hurricane.”