CHARLOTTE AMALIE — A St. Thomas man wanted for questioning in an illegal gun possession case in Hospital Ground was arrested in Oklahoma after a traffic stop, authorities said.

Walter was apprehended yesterday during a traffic stop, outside of Oklahoma City, according to Shappert.

He is expected to make his initial appearance on the federal complaint filed in the District of the Virgin Islands today in the Western District of Oklahoma.

According to the affidavit filed in this case, on April 8, 2020, Virgin Islands Police Officers investigating recent shootings in the Hospital Ground neighborhood of St. Thomas pursued a group of men that fled as the officers entered the Jah Yard area.

Walter was identified as one of the four men who fled. One of the men, Kenan Thomas, was arrested after allegedly hiding two bags he carried while fleeing to a nearby residence.

The bags contained four firearms—an AK-47 pistol, an AR-15 pistol, a .45 caliber handgun, and a 10 mm handgun—and over 200 rounds of ammunition.

Walter allegedly had possessed the firearms contained in the two black bags.

According to the affidavit, Walter’s DNA was recovered from one of the black bags containing the firearms; from two of the firearms; and from two AK pistol magazines.

Walter is prohibited from carrying firearms, as he was previously convicted of multiple felonies in Arizona.

This case is being investigated by the U.S. Bureau of Alcohol, Tobacco, and Firearms (ATF) and the Virgin Islands Police Department (VIPD).

A complaint is merely a charging document, and it is not evidence of guilt. 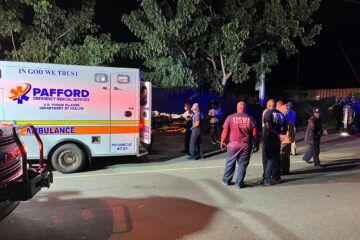