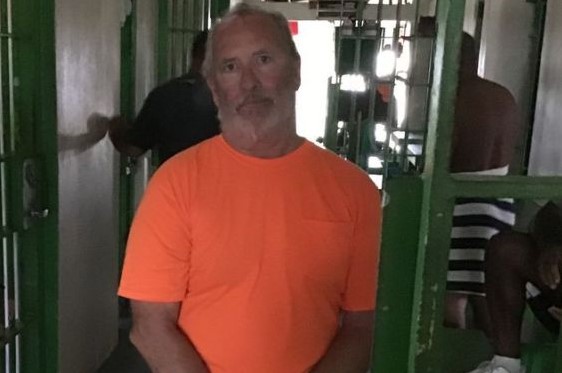 Foy, 60, will be allowed to post bail after spending more than three months in a “medieval” BVI jail cell.

The part-time resident of Puerto Rico is patiently awaiting his day in court on illegal fishing and illegal immigration charges.

Forced to endure Tortola’s “kangaroo” court system, Foy has already been scheduled to appear in Road Town’s “High Court” 10 times for preliminary hearings leading up to this weekend’s announcement.

“Today was his 10th court date for an alleged illegal immigration violation,” brother Joe Foy said late Friday. “There’s all kinds of paperwork to be done, but he will be out of there (Tortola jail) on Monday.”

Michael Foy’s movements will be restricted by the court during his bonded release. He will be allowed to stay with a Tortola native whom the High Court has found acceptable as Foy’s sponsor, his brother Joe Foy said.

A trial is tentatively scheduled for next week — likely to be a remote video hearing, as the BVI is under a partial lockdown to attempt to control the spread of COVID-19, his brother said.

Earlier court dates have been repeatedly cancelled or postponed due to the “inefficiencies” of the British legal system as practiced in Road Town, Tortola.

Foy, of Manahawkin, New Jersey, was jailed on June 11. He was initially charged with illegal entry in violation of the BVI’s COVID-19 precautions. Then he was later hit with a charge of illegal fishing, although he had been fishing south of his home port in Puerto Rico far away from territorial BVI waters.

Fishing far offshore for tuna and swordfish, Foy has worked with an Indonesian crew for a number of years; to fully comply with regulations for clearing U.S. customs. The boat captain and his crew had been regularly calling on Road Town in Tortola to stamp passports before returning to Puerto Rico.

Foy’s family says his vessel Rebel Lady was put offshore by the BVI government on June 8, waiting for clearance to enter Road Town as he had done many times before. In June, when he and his crew were approached by BVI authorities, he was instructed to follow the customs enforcement boat in.

Under the impression that he was about to get a customs clearance form, Foy instead was taken into official custody by BVI officers at the dock and his boat, the Rebel Lady, was impounded by government officials there.

Initially charged with illegal entry, Foy a few days later was also charged with not arriving at an “authorized port,” and with operating an unlicensed or unregistered fishing vessel — actions that suddenly escalated the potential monetary penalties he faced to at least $511,000.

As part of Foy’s defense, lawyers obtained from the NOAA National Marine Fisheries Service vessel monitoring system records and other data that the Rebel Lady is required to carry to comply with U.S. regulations for pelagic longline fisheries. That data clearly shows that Foy and his crew were nowhere near BVI territorial waters when fishing, his family says.

After the BVI High Court granted bail, the family was busy arranging to meet the requirements of the court, which Joe Foy said would take a couple of days to complete.

“Plus, they have his boat on the dry” in storage, Joe Foy added. BVI prosecutors are seeking forfeiture of the vessel to the British territory.

Meanwhile, the Rebel Lady’s Indonesian crew has been confined to a Tortola hotel.

Joe Foy said their situation remains unclear, but it appears that BVI authorities may want to deport them because they have no assets of value to take.