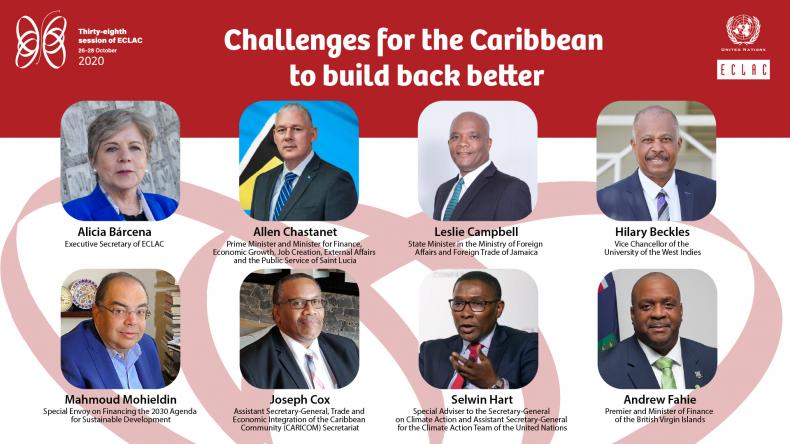 SANTIAGO, Chile — Caribbean countries, especially the small island states, need support from the international community to confront the “perfect storm” that is looming over them: heavy indebtedness and a liquidity crisis, vulnerability to climate change, and high expenditures due to the COVID-19 pandemic, Alicia Bárcena, Executive Secretary of the Economic Commission for Latin America and the Caribbean (ECLAC), said during a panel discussion on “Challenges for the Caribbean to build back better.”

As part of the institution’s “Caribbean First” strategy, Bárcena presented during the panel The Caribbean Outlook: forging a people-centered approach to sustainable development post-COVID-19, which provides an assessment of the subregion’s current situation and offers policy recommendations for building back better after the pandemic.

“The Caribbean has made enormous fiscal efforts to cope with COVID-19 (between 0.5 percent and five percent of GDP in the 12 countries analyzed, with the exception of Barbados). However, these resources are insufficient in the current context,” said Bárcena, who recalled that the subregion’s countries – like the rest of the Latin American nations – are considered to be middle income, which hinders their access to international financing under favorable conditions.

ECLAC forecasts a 6.9 percent contraction in the subregion’s GDP in 2020 (excluding Guyana), on top of a fiscal deficit (estimated at 2.1 percent of GDP in 2018, showing an upward trend) and high levels of public debt, which are also on the rise (amounting in 2019 to 67.6 percent of GDP).

The document presented by ECLAC indicates that tourism has been one of the sectors most affected by the pandemic in Caribbean countries (a contraction of between 6.6 percent and 8.5 percent of GDP is forecast in tourism), while health expenditures related to COVID-19 amounted to $260 million dollars during the first quarter of 2020 alone.

At the same time, the socioeconomic effects of the pandemic observed in the subregion reflect the underlying inequalities in access to education, according to the report. The temporary closure of school facilities has affected around 12 million students in 29 Caribbean countries.

“Financial assistance from donors has been inadequate” given the enormous challenges that Caribbean countries face, Bárcena underscored, warning that the “subregion’s liquidity crisis could become a solvency crisis, which would lead to a perfect storm.”

Annually, the Caribbean spends $3 billion dollars on losses and damages caused by environmental disasters and the effects of climate change, which increases the fiscal burden on countries, she stressed.

“The international community has to be present in these circumstances. You, the representatives of Caribbean countries, have told us that taking on more debt is not an option today,” ECLAC’s highest authority stated. “For years we have been promoting a debt relief initiative and the creation of a Resilience Fund for the Caribbean. We need an initial capitalization of $6.9 billion dollars (12.2 percent of the regional debt) and access to concessional financing.”

The Caribbean Outlook sets forth a series of development priorities for building back better in the subregion: strengthening food security and addressing poverty and inequality; promoting economic diversification and blue/green investments to build resilience; expanding access to broadband and promoting greater use of digital platforms for education and communications; strengthening risk assessment and disaster management; improving social protection and addressing the needs of vulnerable populations; and bolstering health infrastructure for the response to COVID-19.

In this sense, Bárcena called for addressing the declining trend in the subregion’s productivity, for diversifying and expanding trade in both goods and services, and for focusing on capacity-building. Also, she said, it is necessary to address gender inequalities, particularly those existing in the labor market.

Providing comments on the panel were Allen Chastanet, Prime Minister and Minister for Finance, Economic Growth, Job Creation, External Affairs and the Public Service of Saint Lucia; Leslie Campbell, State Minister in the Ministry of Foreign Affairs and Foreign Trade of Jamaica; Andrew Fahie, Premier and Minister of Finance of the British Virgin Islands; Hilary Beckles, Vice Chancellor of the University of the West Indies; Mahmoud Mohieldin, Special Envoy on Financing the 2030 Agenda for Sustainable Development; Joseph Cox, Assistant Secretary-General of Trade and Economic Integration of the Caribbean Community (CARICOM) Secretariat; and Selwin Hart, Special Adviser to the Secretary-General on Climate Action and Assistant Secretary-General for the Climate Action Team of the United Nations.

These representatives thanked ECLAC for preparing The Caribbean Outlook, which they described as a detailed and profound report that offers concrete and pragmatic solutions to the Caribbean’s current challenges. They also reiterated their support for the debt relief initiative and the creation of a Caribbean Resilience Fund, as proposed by ECLAC, and advocated for decisive support from the international community, both to expand fiscal space in the subregion’s countries as well as to generate resilience with a view to building back better after the pandemic.

During the remarks made by the delegations, Efraín Guadarrama, Director General of American Regional Organizations and Mechanisms at the Secretariat of Foreign Affairs of Mexico, reaffirmed the commitment of his country and of the Community of Latin American and Caribbean States (CELAC) -in which Mexico currently holds the Presidency Pro Tempore- to the challenges of the Caribbean and to regional unity.

“You can count on the Commission,” she said. “We are very committed to financing for development. We will continue to promote proposals for debt relief in the Caribbean,” she emphasized.