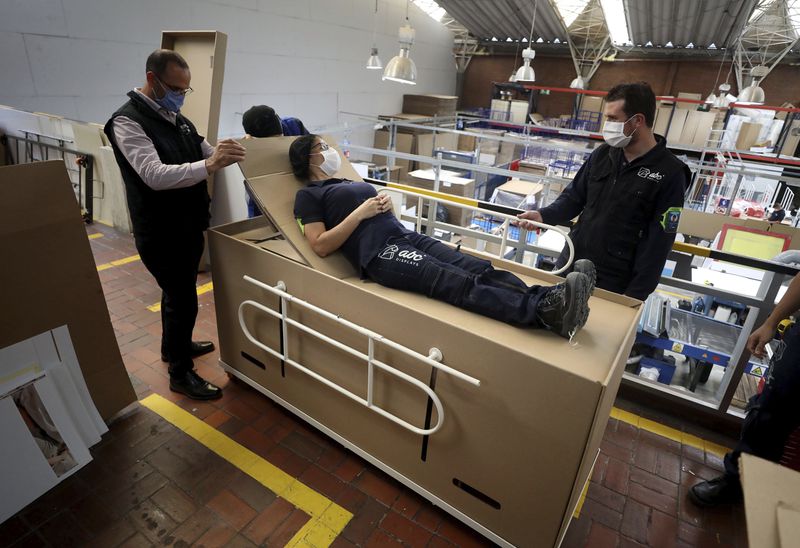 BOGOTA — Hospital beds that can be transformed into coffins are being billed as a grim solution for shortages on each item amid the coronavirus pandemic.

The mordid product, developed by Colombian company ABC Displays, is a cardboard bed with metal hospital railings along the sides.

Disturbing images of bodies of dozens of coronavirus victims awaiting burial on the streets of Ecuador’s largest city Guayaquil inspired a businessman in neighboring Colombia to create the product.

Colombia’s health system so far has not been overwhelmed by COVID-19 patients,- but the pandemic has caused overcrowding at hospitals and funeral homes elsewhere.

“We saw what was happening in Ecuador, that people were taking dead family members out onto the streets…what’s happening also is that funeral services are collapsing with the pandemic,” Rodolfo Gomez, 44, said. “So we started to develop a bed that could be converted into a coffin.”

The beds have metal railings, wheels with brakes and can be inclined up and down. They can support up to 150 kg. (330 lbs.). He said the biodegradable bed-coffins cost between $92 and $132.

Gomez hopes their low cost will mean local and provincial governments can outfit rural or under-funded hospitals cheaply. Converting them to coffins if a patient dies will also reduce possible contamination, he said.

“Once the bodies are prepared it is converted to a coffin and covered,” said Gomez at his Bogota factory, which can produce up to 3,000 beds per month. “The staff who are nearby are not exposed to biological risk.”

The first bed-coffins will be donated to the hospital in Leticia, an Amazonian Colombian city which has a high number of cases and limited hospital capacity.

Gomez says he has already spoken to potential buyers in Peru, Chile, Brazil, Mexico and the United States.

Hospital beds that can be transformed into coffins are being billed as a grim solution for shortages on each item amid the coronavirus pandemic.

The mordid product, developed by Colombian company ABC Displays, is a cardboard bed with metal hospital railings along the sides.

While the Bogota-based business is typically dedicated to marketing, the advertising industry has been at a near standstill over the last month as the nation remains on lockdown.

ABC Displays manager Rodolfo Gomez said watching the health crisis wreak havoc in nearby Ecuador was enough to inspire him to take action. He said he worked on his designs with a private clinic before developing the bed, which can hold around 330 pounds.

“Poor families don’t have a way of paying for a coffin,” Gomez said.

He explained that residents of the coastal city of Guayaquil were forced to wait for days at a time with the body of a loved one as coronavirus cases continued to surge last month. Many of them could not find or were unable to afford a wood coffin and had to use donated cardboard options instead.

Gomez planned to donate 10 of the beds to Colombia’s Amazonas department, where resources are incredibly limited. It’s not clear whether they will be put to use and some experts have expressed concern over the sturdiness of the product.

Colombia as of today has reported nearly 9,500 confirmed cases of the virus.