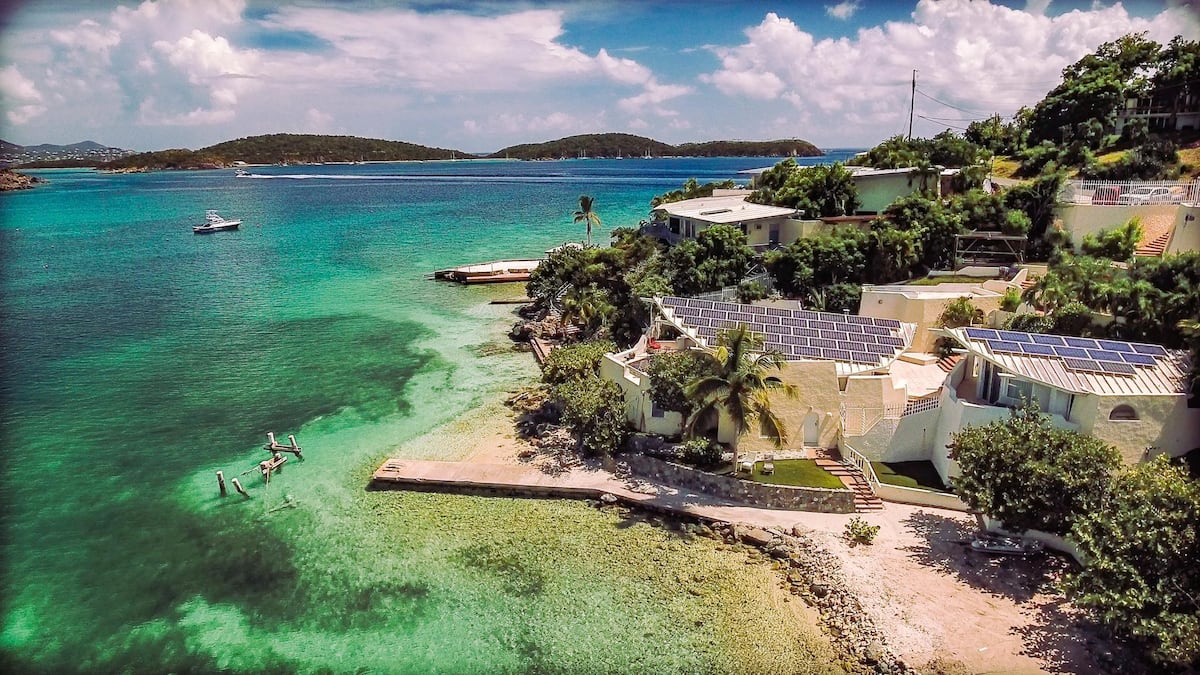 “Interest in the Caribbean has increased, which is not surprising considering the cold weather that’s plagued much of the States of late. Even though most folks are largely hunkered down, I think people are using this time at home to plan for where they’ll go once the world opens up again—and the idea of sun, sand, and not-too-long a plane ride has its appeal.

“Just say the word ‘Caribbean’ and you conjure images of turquoise waters, leaning palms, and cocktails on the sand,” says Stevens. “And that’s about right—it’s hard to beat the sunny skies and warm, clear waters; the fishing, diving, snorkeling, sailing. A laidback life in flip flops and a sun hat sounds pretty good when you’re shoveling snow in below-zero temperatures.

“But most people assume that Caribbean dream comes with a steep price tag. And that’s not necessarily so. On the five good-value Caribbean islands our International Living team has pinpointed, a couple could live comfortably in the sun for around $2,500 a month—and even less in some places.”

Belize, Honduras, Dominican Republic, Panama, and Mexico all offer islands off their Caribbean coasts—islands that share the same turquoise-blue waters and powder-white beaches as more expensive Caribbean destinations and are much, much more affordable.

International Living editors have identified five of the best Caribbean islands that won’t break the bank…and two that just might—in their report, 5 Best Caribbean Islands to Live On…and 2 to Avoid.

St. Thomas is the island on which most of the population of the U.S. Virgin Island lives. It is also the most commercialized of the islands and a regular stopping off point for Caribbean cruise ships. This 30-square-mile island has jungle cliffs that soar high into the sky and the turquoise sea is dotted with yachts of all shapes and sizes. St. Thomas, and in particular the capital of Charlotte Amalie, can get overrun by tourists.

While St. Thomas may be a nice place to live, apartments rent for about $2,000 a month, and to buy a two-bedroom house in a good neighborhood will cost about $285,000-plus.

English-speaking Ambergris Caye is the largest island in Belize at 25 miles long and a little over a mile wide, and San Pedro is its only town. About 30 years ago, Ambergris became a hotspot for divers and fishermen thanks to the Belize Barrier Reef, just a half-mile offshore. This natural wonderland of living coral supports a dizzying array of marine life, and it’s the main reason Ambergris has seen its recent (and significant) growth.

Until just a few years ago, San Pedro was a little fishing village that catered to adventure tourists coming for the scuba-diving and deep-sea fishing. The main motorized transportation on Ambergris Caye at that time was golf carts (which remain popular, though there are many more cars on the island today). San Pedro is now the second-largest town in Belize District with more than 15,000 people, surpassed in size only by the former capital, Belize City.

Expats give up little living on Ambergris Caye. Power, water, cell phone coverage, and internet are reliable…and most necessities for daily living are readily available on the island. Regular water taxis and flights make it easy to take a quick shopping trip in Belize City, or Chetumal, Mexico. The selection of quality restaurants and bars is constantly expanding.

For between $2,950 to $3,150 per month, a couple can enjoy a comfortable retirement in Ambergris Caye—a budget that includes the cost of a house or apartment rental. Own your own home on the island outright and it’s possible for a couple to live quite comfortably on less than $2,000 a month.

Belize is currently open to international travel, with some COVID restrictions.

Roatán, one of the Bay Islands, has quietly graduated from secret divers’ getaway to a livable island haven. Just 50 square miles, this green, hilly island off Honduras’ northern coast is long and skinny, fringed by a reef rich with sea life and garnished by white-sand beaches.

The beaches here are quiet and pristine. Life is laidback, lived in rhythm with the sun and the surf. No big-name resorts. No “spring break” strips. No high-rise developments. This is old-school Caribbean…though fitted out with modern conveniences. And English is commonly spoken.

This is an island where “normal” people can buy a vacation home or permanent digs to live out their sunny, low-cost, and comfortable retirement. The infrastructure is good and getting better all the time, with a new power plant online and the recent opening of a hospital with specialist care and a 24-hour emergency room.

Less than $175,000 buys a two-bedroom Caribbean home right on the water in a quiet neighborhood with no tourists. Life on an island is often more expensive than mainland living—almost everything has to be imported, after all. But relative to the rest of the Caribbean, Roatán offers excellent value.

Roatan is currently open to international travel, with some COVID restrictions.

Isla Mujeres is about eight miles from Cancún in Mexico, but this laidback island is a world away from the hustle and bustle of its more tourist-developed older sister. Before Cancún existed, Mexicans and a few adventurous foreigners went to Isla Mujeres for some of the best beaches and water sports in the world—diving for coral, swimming with dolphins, and sailing on a crystal blue sea.

The island enjoys a warm tropical climate (low to mid-80s F for most of the year) and a laidback vibe; golf carts are preferred to cars as the main means of transport.

Clear, azure waters and white-sand beaches are never far away, and the cost of living is far lower than a similar lifestyle would cost back in the States. A one-bedroom, two-bathroom penthouse condo goes from $230,000, and a one-bedroom place rents for $700 to $1000 a month.

Mexico is currently open to international travel, with some COVID restrictions.

Christopher Columbus knew he was on to something good when he spotted a beautiful, coral-rimmed island in 1492. “This is the fairest land under heaven,” the Spanish explorer is reported to have said.

The Dominican Republic has great weather and world-class beaches, not to mention a low cost of living and a stable government—plus it’s just three-and-a-half hours from New York.

The north coast of the island has some of the finest beaches in the Caribbean, the east coast is a sportsman’s paradise with some of the newest designer golf courses in the region.

This isn’t all-inclusive resort territory, and thanks to strict planning laws it should stay that way. The beach hotels here are small and family-run rather than sprawling, faceless chains.

The beaches around Las Terrenas are some of the most pristine in the Dominican Republic.

The most incredible thing about it, though, is the real estate prices. A one-bedroom, one-bathroom loft apartment can be had for as little as $92,000.

A couple can live in this tropical haven for around $2,000 a month, although most choose to spend closer to $3,000 a month.

The Dominican Republic is currently open to international travel, with some COVID restrictions.

Not many people know that Panama has its own tropical archipelagos. Set on the Caribbean coast, close to the border with Costa Rica, Bocas del Toro is a group of nine main islands and a few hundred smaller cayos and islets, dotting calm turquoise waters.

The main hub is bustling Bocas Town, on the large island of Isla Colon, which sits below the hurricane belt. It’s a ramshackle seaside town of brightly painted buildings—many on stilts over the water. It’s the home base for most visitors and where the majority of expats live.

Bocas, as it is known, is all about water. Water sports, fishing, and whale watching are just some of the popular pastimes for locals. The small city is tourist driven but with a laidback feel.

Depending on the lifestyle expats choose, a couple can live here on as little $2,000 a month, renting a simple, snug, island-style home. Bocas is home to a great deal of untitled or right of possession (ROP) property. It’s best to rent and familiarize yourself with the unique landscape before contemplating a property purchase here.

Panama is currently open to international travel, with some COVID restrictions.

What do Nicolas Cage, Johnny Depp, Oprah Winfrey, Sean Connery, Bill Gates, and Tiger Woods have in common? Apart from being celebrities, they’re among thousands of North Americans and Europeans who own second homes in the Bahamas.

Like other expats who live there for all or part of the year, these stars often think of the Bahamas as a paradise—an upscale group of islands with some of the most beautiful beaches in the world. The Bahamas are friendly to newcomers, there’s no foreign language to cope with, crime is relatively low, and the islands are positioned just off the Florida coast.

That’s the good news. The bad news is that property on the islands usually isn’t cheap. Medium-size residences in exclusive gated communities with ocean views often cost more than $2 million.

Grand Bahama Island has become a haven for beach-lovers as well as divers, fishermen, golfers, and sports enthusiasts of all kinds. It’s also a prime destination for people who enjoy world-class shopping. But living here costs a premium as it’s between 30 percent and 50 percent more expensive than in the U.S.

For the record, the report stated that the two islands to avoid “Because Costs Are High,” are St. Thomas, U.S. Virgin Islands and the Grand Bahama Island in The Bahamas.

For more information on the Caribbean’s most affordable islands, including interviews with expats living and working there, go to 5 Best Caribbean Islands to Live On… and 2 to Avoid.

International Living’s complete 2021 Annual Global Retirement Index can be found at: The World’s Best Places to Retire in 2021.