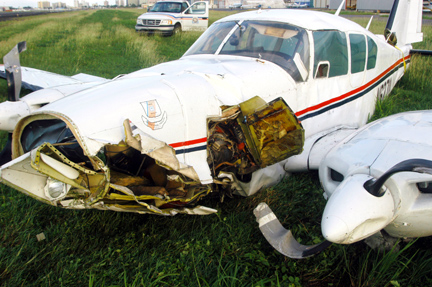 Forgive me if I’m not willing to sanitize Monday’s crash of a private aircraft at Botany Bay in St. Thomas.

You see, I survived a private airplane crash at Isla Verde, Puerto Rico in October of 2004 — so I’m a little sensitive to these matters.

The private Facebook group “What’s Going On St. Thomas?” removed me personally as a member after a few people complained about a headline to a news report posted in that hallowed social media niche last night.

One “What’s Going On St. Thomas?” reader said “there must be something wrong with (my) brain” to have written the headline that went along with the story.

And that may well be. After all, two of the passengers behind me on the 2004 flight (I was sitting in the co-pilot’s chair at the front of the Twin Comanche) said that I hit my head on the dashboard, front windshield, and left side window in the crash.

I don’t remember that. What I do remember is the calm voice of my former business partner tapping me on the shoulder and saying: “John, it’s time to get out of the plane.”

After the crash, my business partner’s 20-something daughter had started to feel heat from the airplane after impact. She was worried that the plane was about to explode in flames. She was screaming loudly behind me.

I don’t respond well to panic — or screaming. Even after an airplane crash. I am stubborn that way.

So it took the well-modulated voice of a calm individual to snap me out of my daze and realize that I was blocking the egress of everyone on the plane by remaining in my seat. I had to exit the airplane onto the plane’s right wing in order for everyone behind me on board (there were five passengers including myself and one pilot) to exit the airplane.

I remember lifting my left leg off of the co-pilot’s chair with my arms because it wouldn’t move on its own (my left knee had slammed against the instrument panel/dashboard of the plane on impact). In a few short days, that knee would turn a deep blue-black because of the bruising action it took from the violence of the touchdown.

I was able to move myself out of the plane and the others (two women and three men) followed swiftly after me.

As we were standing on the runway grass just off the tarmac at Isla Verde watching airport firefighters hose down the airplane with white foam to guard against it exploding, my business partner’s daughter had the presence of mind to ask” “Is everyone OK?” We all said: “Yes.”

The next question was: “Do you think the alcohol made it, too?” We had all brought a few bottles of liquor in our luggage to take onto the cruise ship we were about to board in Puerto Rico. (It turned out — it did!)

As we were standing there, a 30-ish female airport administrator approached us standing on the grass in proximity to the mangled airplane and asked us if we had seen the survivors of the crash and where they went to.

We looked around and then said in tandem: “We are those people.” (Apparently, we were acting too blasé.)

She thought maybe her English wasn’t so good, so she repeated the question to us: “No the people who came out of that crashed airplane in the field over there (she pointed to our crumpled airplane). The people who are screaming and crying and rolling around on the ground.”

When we again said: “We’re the ones who were on that plane.”

She didn’t believe us. So she again repeated her question: “No. I mean the actual people who were on that airplane when it crashed. The people who are crying and screaming and rolling around on the ground.”

Well, the six survivors of that flight never did any of that. In fact, neither man nor woman issued a peep when the airplane had difficulty.

We didn’t have time. It happened that fast. People learning of my encounter later said: “You must’ve been scared.” Amateur pilots suggested someone took a “dump in their flight suit.” Professional pilots told me: “Any landing you can walk away from is a good one.”

In my mind, when I heard the aircraft stall warning, I tried to think positively — even at that moment. I was trying to think: “We can do this.”

Because I was in the co-pilot’s chair, I was privy to the conversations our pilot Dimitri was having with air traffic control in San Juan.

I could faintly see three airplanes in the distance were on a collision course heading straight towards us. The tower, understandably, was concerned. It told Dimitri to make an emergency landing at the airport — Isla Verde — our intended destination.

The problem was, Dimitri did that immediately — as soon as he was told to do so — making a 90-degree turn in midflight that caused the airplane to lose all forward airspeed.

The stall warnings on the airplane immediately sounded (it is one of the worst sounds you can hear on earth — I recommend that you never hear one) and the aircraft basically fell out of the sky — like a stone — from about 200 to 400 feet in the sky.

But as impact approached, Dimitri was able to straighten out the plane enough so that it landed on his side — the left wing — that saved all of our lives that day. That and the fact that we were low on fuel.

My former business partner — who is himself a pilot — said that the Twin Comanche crashed due to “pilot error.”

“Most airplane crashes don’t happen because of mechanical failure,” he explained. “They happen because of pilot error. Dimitri should have taken the plane around again and approached the runway from a different angle.”

The people on the helicopter that crashed Monday afternoon were not on some Walt Disney World wild ride that went a little sideways — it was a real life-or-death experience that ended in one of the most grisly, ghastly and violent ways imaginable.

The members of “What’s Going On St. Thomas?” might want to sanitize what happened to those poor, innocent victims out of sensitivity to surviving family members, friends and schoolmates. I; however, cannot.

Because I am one of the lucky survivors of aircraft accidents — Tyler Yannone, Daniel Yannone, Neisha Zahn and Maria Rodriguez — were not.

So when the good people of St. Thomas tell me that my online newspaper overreacted in writing a headline about a fatal aircraft crash that killed four people — they don’t know who they’re talking to.

“What’s Going On St. Thomas?” has the power to silence me and my online newspaper.

But they can’t quiet me the way those three innocent victims were silenced Monday.

I’m the only voice they have right now.