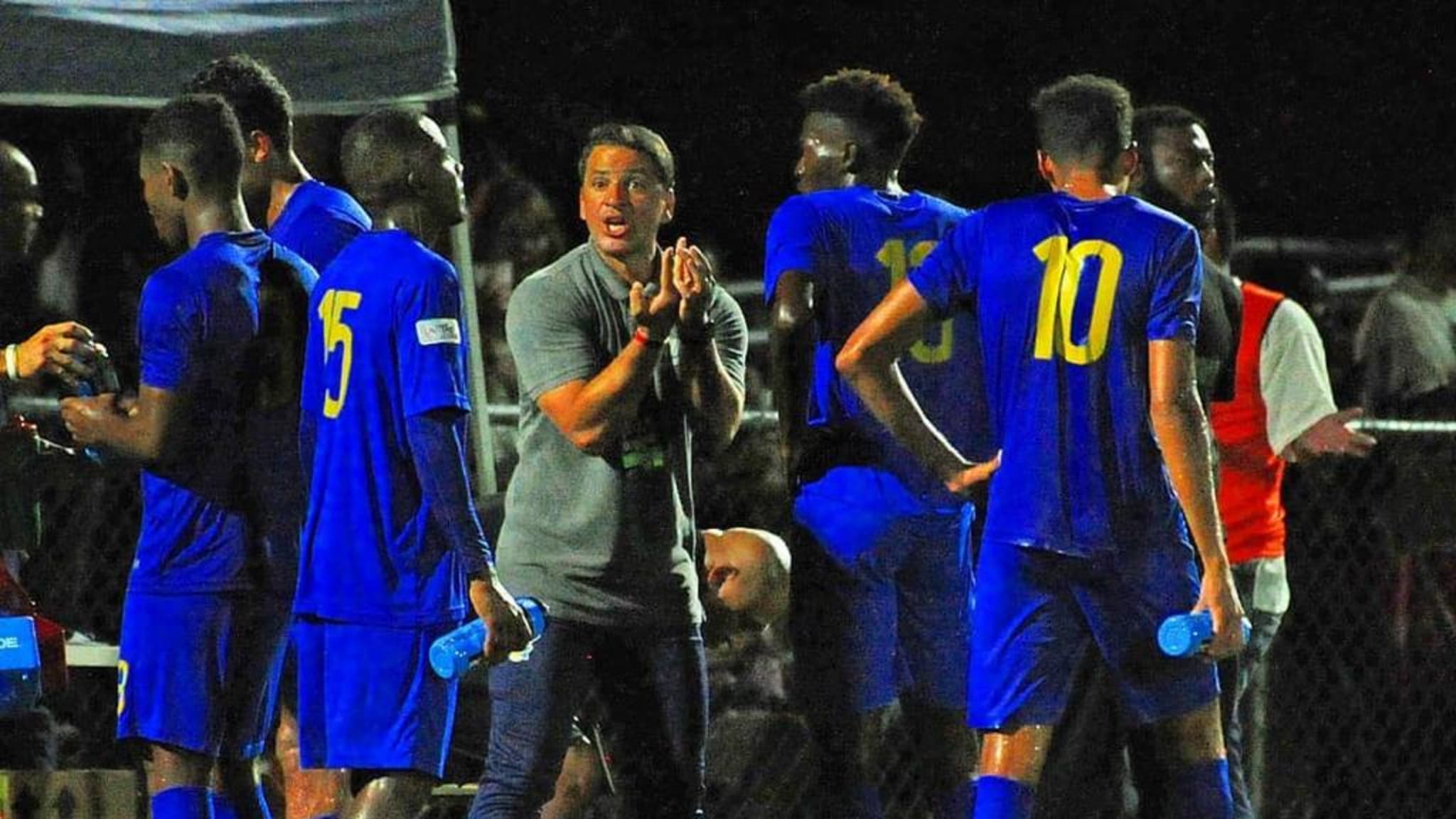 KINGSHILL — Over the past few weeks, the players of the U.S. Virgin Islands’ senior men’s national soccer team have undergone some strenuous workouts.

In training camp in Florida, and now practicing on St. Croix, the USVI’s players have had to learn a new system and a new approach to the game.

Those lessons will get their first real workout today, when the U.S. Virgin Islands National Team hosts Antigua and Barbuda in the USVI’s opening group-play match in the FIFA World Cup Qatar 2022 Qualifiers.

The match will have a limited number of spectators in the stands at the Bethlehem Soccer Complex on St. Croix, allowed under COVID-19 protocols enacted by the Virgin Islands Health Department, the Centers for Disease Control and Prevention and international soccer’s governing body FIFA.

This will be the first spectator event of any kind in the territory since last March, when the COVID-19 pandemic brought things to a halt worldwide.

Today’s match is the first of four scheduled matches for the USVI, which is in Group A along with Antigua and Barbuda, El Salvador, Grenada and Montserrat.

The U.S. Virgin Islands also has matches at Grenada on March 30 and at Montserrat on June 2, and a home match against El Salvador on June 5. The top finisher in each of six groups advances to the second round.

That’s the goal the USVI National Team has set for itself, said Vin Blaine, the USVI Soccer Association’s director of football.

“The players are very, very, very confident, and that’s all that we can ask of them right now,” said Blaine, a former technical director with the Grenada Football Association and director of football with the Jamaica Football Federation.

“We’re in a tough group … and it’s only one team that goes through to the second round. So, our first couple games will be very important to us. At least we get a chance to see our opponents play before we have to face them.”

Blaine will handle head coaching duties for the USVI in today’s match, after head coach Gilberto Damiano Jr. could not make the trip to St. Croix due to what Blaine said were “personal matters beyond [Damiano’s] control.”

Also missing is forward J.C. Mack III, one of the USVI’s captains, who currently plays professionally for the Albion Park White Eagles in Australia’s Illawarra Premier League. “The Australian government will not allow him to leave, them come back,” due to the country’s stringent COVID-19 pandemic regulations, Blaine said.

However, the rest of the USVI’s 23-man roster is in place, and coming off two major workout sessions — a training camp in Miami last week, and this week’s practices on St. Croix.

That’s where Damiano, Blaine and the rest of the U.S. Virgin Islands’ coaching staff have been working on installing a new approach to the game.

“It’s a new system, a new coaching approach, a new game model for the team,” Blaine said. “We’re trying to get their mind around how we want them to play.”

As part of their training, the USVI took on Anguilla in a friendly match in Miami last week, with the game ending in a scoreless tie.

“We had a chance to go over what we wanted them to do,” Blaine said. “It was pretty intense.

While the U.S. Virgin Islands only has the friendly against Anguilla under its belt, Antigua and Barbuda (0-0-1 in Group A) has already played its first Qatar Qualifiers match, battling to a 2-2 tie against Montserrat (0-0-1) on Wednesday in Willemstad, Curacao.

So, even though the USVI’s players are still untested under the new system, Blaine is confident that won’t be an impediment.

“We’re very, very confident,” he said. “Based on what I’ve seen so far, they’re quite disciplined. Their movement is good, and they’ve covering areas quickly. If we close on our opponents quickly and not allow time to play, it will benefit us.

“We’ve got young players whose energy level is high and their movement is good. We’ve asked them to do certain things … and they’ve been doing that quite well.”

The COVID-19 pandemic has been wreaking havoc globally for over a year now, and sport has certainly not been spared by the virus.

Most stadiums still remain empty or are just partially filled, with tournaments and qualifiers either postponed or cancelled altogether.

While most places ground to a halt, the U.S. Virgin Islands took their football fate into their own hands and made a virtue out of necessity.

“There are always two ways of looking at things. Either you wait it out and hope that things somehow improve, or you roll up your sleeves and do something about it,” said the territory’s national team coach Gilberto Damiano to FIFA.com. “We began things back in March 2020 when we had to go into lockdown. We sat down together and worked out what we could do, and came up with a three-part plan, each stage lasting two years.”

“This job for me is one of the most fulfilling things I’ve ever done in my life,” says Damiano, a veritable globetrotter who took over the reins of the Dashing Eagles in 2019. “I’m working in a place where everyone knows one another, and the effect of that is enormous. When you actually put something in place that makes things better, people notice it straight away. You can’t put a price on the gratitude and often it’s a lot nicer than working in a big club somewhere in another part of the world.”

Damiano was born in Brazil, then emigrated to the UK in 2001, working with a number of teams after that, as a coach with Cardiff City and also in Italy. “The beauty of football is its mix of cultures. I have futsal roots from my time in Brazil, I appreciate the Italian mentality when it comes to defending and English football, which seems to be coming on every year,” he says.

The 44-year-old now spends most of his time in London, and prior to the pandemic, he went to the US Virgin Islands at least once a month. These days, almost all communication is via video. He makes an online call to his team at least six times a week to work on the players’ fitness and tactical understanding, in addition to all sorts of meetings with the local coaches. “I’ve learnt so much over the past months,” he explains. “Our players are based in France, Australia, USA, Antigua and the US Virgin Islands. We now have more coaches on site and we’re on the right track.”

Damiano intends to leave behind a legacy for the US Virgin Islands. “At some point, someone else will be sitting here at my desk and will hopefully be grateful for what we’ve achieved,” he says. “It’s all about the people. I love it. Football is not the most popular sport on the US Virgin Islands, so the main thing that we’re trying to do is to reach young people and get them interested – they can achieve something with us not just as players but as coaches or volunteers. The sky’s the limit.”

Things may not be easy for this tiny Caribbean nation, but they are making the best of things, in particular thanks to support from FIFA.

“FIFA is the key to football’s success on the US Virgin Islands,” the coach says. “The support that we have received from FIFA is amazing. It’s the only way that we can drive change here. FIFA believes in the same things as we do – put people first and give them opportunities to let them grow. Football is the best way of doing that. I am really grateful to be part of the process and to have FIFA alongside us.”

As well as the enormous amounts of development work, play will finally be getting under way at the end of March in qualifying for the FIFA World Cup Qatar 2022™. The country’s first opponents in Concacaf Group A will be Antigua and Barbuda, whom they face on 27 March. El Salvador, Montserrat and Grenada make up the rest of the group.

“We need to establish what our goals are,” Damiano explains. “We want to go into every match with the belief that we can win. We want to go toe-to-toe with the opposition. There are no easy groups when it comes to qualifying for a World Cup. Everyone wants to win because each individual is representing their home country. We have a good mix of young and experienced players. Qualifying will be a good test regarding what we’re doing here. We’re looking forward to what lies ahead.”

Damiano on his squad of players: