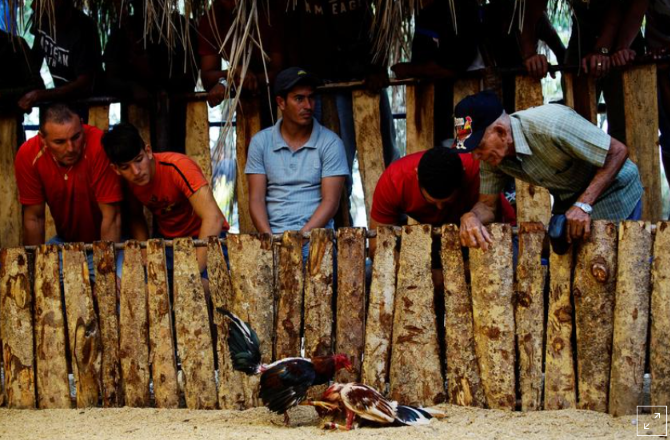 The origin of cockfighting dates back thousands of years, but it was during Ferdinand Magellan’s voyage to the Philippines in 1521 that modern cockfighting was first documented by his chronicler, Antonio Pigafetta, in the kingdom of Taytay. It’s a gruesome and still-rampant blood sport, disturbingly present in Massachusetts.

Most states banned cockfighting in the 19th century, and in the 21st century, Congress has made cockfighting a felony and banned it everywhere in the U.S. It’s also a crime to train birds for fighting, ship them across state, territorial or national lines, to traffic in the fighting weapons cockfighters attach to the birds’ legs, or to attend a fight or bring children to one.

Most recently a provision that outlawed cockfighting in the U.S. territories was signed into law in the 2018 Farm Bill. We worked hard to secure the latest provision — banning animal fighting in the U.S. Virgin Islands, Puerto Rico, American Samoa, the Northern Mariana Islands and Guam — and that provision won support from the entire Massachusetts congressional delegation, except for one who missed the vote.

We followed up on the new law by conducting an investigation of live-animal shipping records to Guam. We found records for 9,000 birds shipped to Guam from the states, and it was plain that these transports were animals bound for Guam’s fighting pits. Our investigation revealed that Americans are deeply involved in the global trade of fighting animals. Little has been done by local or federal authorities to stop this disregard for the law.

And a Massachusetts man, Miguel Rodriguez from Holyoke, was convicted on cockfighting charges a few weeks ago stemming from a illegal cockfighting operation at a Florence farm in 2018, but unfortunately given merely a slap on the wrist when Judge Jacklyn Connly sentenced him to two years of probation.

Animal fighting is animal abuse — plain and simple. The illegal gambling adds to lawlessness. Bringing children to the fights, using, or distributing narcotics, and engaging in other illegal activities should make the whole enterprise a hot target for the U.S. Department of Justice, and for state and local law enforcement.

It’s not only inhumane and unconscionable but, it’s a health and human safety threat, given the role of cockfighting in spreading Newcastle disease, and Avian influenza — something everyone should be mindful of amid the current pandemic. It’s clear that COVID-19 most likely jumped the species barrier from animal to mankind in a live-wildlife market in Wuhan, China — and the conditions surrounding cockfighting aren’t that different with cockfighters often sucking the blood out of roosters’ lungs themselves in mouth-to-mouth resuscitation-like contact so the gamecocks can continue to fight to the death — blood and feathers flying all around.

But there is hope with the Animal Cruelty Enforcement (ACE) Act, H.R. 1016, recently introduced in the U.S. House. The bill would create an Animal Cruelty Crimes Unit at DOJ to better enforce federal anti-cockfighting and cruelty laws and has already been co-sponsored by representatives from Colorado, Ohio, Tennessee, Iowa, California, Florida, Pennsylvania, New Jersey and New York. Its companion measure, introduced in 2020 by Sens. Mike Braun, R-Ind., John Kennedy, R-La., and Democrats Richard Blumenthal and Sheldon Whitehouse, two former attorneys general from neighboring Connecticut, and Rhode Island, will soon be reintroduced in the U.S. Senate.

Opposing animal cruelty is a nonpartisan issue, and we call the members of Congress from Massachusetts — Sens. Elizabeth Warren and Ed Markey, and Reps. Richard Neal, Jim McGovern, Lori Trahan, Jake Auchincloss, Katherine Clark, Seth Moulton, Ayanna Pressley, Stephen Lynch, and William Keating — to cosponsor and back the ACE Act to help crackdown on this horrific blood-sport that continues to plague the commonwealth.

This isn’t Ancient Rome — it’s 2021. No civilized society should tolerate this form of staged cruelty.

Marty Irby is the executive director at Animal Wellness Action in Washington, D.C. who was named as one of The Hill’s Top Lobbyists for 2020 and was recently honored by Her Majesty, Queen Elizabeth, II for his work to protect animals. Follow him on Twitter, Instagram, and Facebook @MartyIrby