BUKA, Papua New Guinea — Diving a wreck can be an exciting adventure: You never know what you might discover. In the case of Tracy Wildrix, though, he had a pretty good idea of what he might find during an expedition in Papua New Guinea: Amelia Earhart’s plane.

Earhart and her navigator, Fred Noonan, disappeared on July 2, 1937, during her attempt to become the first woman to fly around the world, as first reported in the Virgin Islands Daily News.

In the almost 84 years since their disappearance, there have been countless theories as to what happened — from a crash on a remote island, to being captured by the Japanese, to faking her death and assuming a new identity in New Jersey.

Among those still searching for Earhart is Bill Snavely, the owner of Project Blue Angel. Snavely is focused on Buka, an island off Papua New Guinea, that he believes is on the route she would have flown after leaving Lae, Papua New Guinea. He theorizes Earhart and Noonan flew for approximately 12 hours before turning around due to being low on fuel.

A mutual friend put Snavely in touch with Wildrix. An aircraft pilot, dive master, boat captain and metals expert, Wildrix first agreed to lead the 2018 expedition as the director of operations.

Wildrix started taking flying lessons at the age of 13. At 15, he remembers, he wrote his personal bucket list, and one of the items on it was to be instrumental in finding Amelia Earhart.

“That’s the least I could do, because she motivated me to become a pilot. It’s like I owe this lady a favor,” he said.

That favor seemed pretty daunting. Snavely theorized approximately where the aircraft would be: 10 or 12 miles either way east or west; essentially a needle in a haystack.

With his knowledge of metals and mechanical engineering, Wildrix could guess how Earhart’s plan would have deteriorated over decades in the ocean. Built using aluminum with a high amount of impurities, Wildrix expected to find a pile of dust with perhaps some glass remnants because there was very little brass or bronze that might withstand 80 years in the water.

Wildrix believes they may have found Earhart’s plane using the same methods he has used to find several other wrecks in Hawaii and the Virgin Islands, where he is a frequent visitor.

First, gather as much local knowledge as possible. For Earhart, there was an eyewitness to the crash whose story was passed down in local lore.

“This is the way I’ve discovered shipwrecks on different islands, using side-scan sonar and normal diving exploration techniques and talking to the locals. I needed to have my search area as small as possible and I still knew it would be very, very daunting, because my prediction turned out to be very true. The airplane would be a pile of dust. I located it due to subtle variations showing up in my side scan sonar and pinpoint attention to detail within the underwater topography and depths.”

The plane they found at 125 feet is embedded in coral, which “took it over and turned it into a Flintstone’s plane.” The coral grew all over the aluminum body, then dissolved all of the aluminum, but the team identified trace evidence, small things that would indicate there was once metal there.

They also identified other shapes of parts of the airplane, such as the engines, one of the landing gear, part of a wing, and most importantly, the cockpit. They determined the aircraft debris field was consistent with the Lockheed Electra 10E that Earhart flew.

A major breakthrough came with the discovery of a six-inch glass lens. Although similar to a curved car headlight lens from the era, there are no cars on Buka. The boats, mostly outrigger canoes, have no lights. And, because electricity on Buka is irregular, there are no streetlights and no large lights are affixed to buildings. The lens is also too large to be a flashlight.

Wildrix maintains that the lens is transportation-related. Its smooth face is consistent with aviation, because it won’t attract ice as easily and there’s an advantage to not having divots or dents in the glass for better aerodynamics.

The next thing Wildrix noticed was a half-inch wide area where he believes a rubber O-ring had been set along the edge of the glass. He also noted that the edges had been manipulated by human hands to make it fit.

“When you look at something like an airplane that was manufactured in the late ‘20s, early ‘30s, sometimes things weren’t always so precise, especially something like a light can, and the light cans on Amelia’s plane had a deep recess for the headlights,” Wildrix said.

“My theory is that the light had to be manipulated to be fitted into the airplane and the measurements are ever so nice to compare to the size of the lights in her airplane. That’s a lot of information that the world has not heard and I’m in the process of furthering scientific evaluation.

“Mr. Snavely and I are planning on taking this glass to third parties for specific scientific evaluation to try and get a makeup of the actual material of the glass to see if there’s a little more information that I can pull out of it.”

Speculating further, Wildrix suggests that is it possible the piece is the left headlight lens from Earhart’s plane. Through his research, he believes the light lenses on each side were different, with the left side requiring a smooth interior surface to shine long and bright to see down the runway, while the right had a rough interior to diffuse the light for taxiing in low-speed conditions.

Since the 2018 expedition, Wildrix headed a second visit to the site to continue excavating what he believes is the plane. A deep sea remotely operated vehicle is filming the digs to document the progress.

“We haven’t run out to tell everybody that this is the plane, because I don’t know if this is the plane yet,” Wildrix said. “I have many details about the plane that are all in very good continuity with the likeness of the Lockheed Electra 10E. It’s a very legitimate possibility.”

Wildrix, who returned to the territory Friday, has visited St. Thomas for many years, and feels it has prepared him for what he was to encounter when he got to Papua New Guinea.

“Being a diver, [the Virgin Islands] was one of the stepping stones that prepared me for being able to handle something as complex and as busy as this expedition,” he said. “If I could at all help to motivate people to understand that diving doesn’t give you much danger of COVID and it’s a good, healthy, safe, clean thing to do. St. Thomas is loaded with all kinds of wonderful dive sites.”

NIGHT LIGHTS! VIPD Helps Put The Lights Back On In Smith Bay To Tamp Down Crime 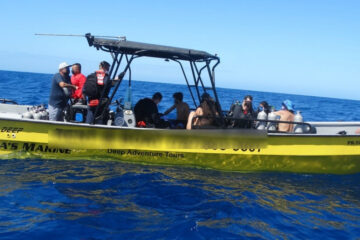