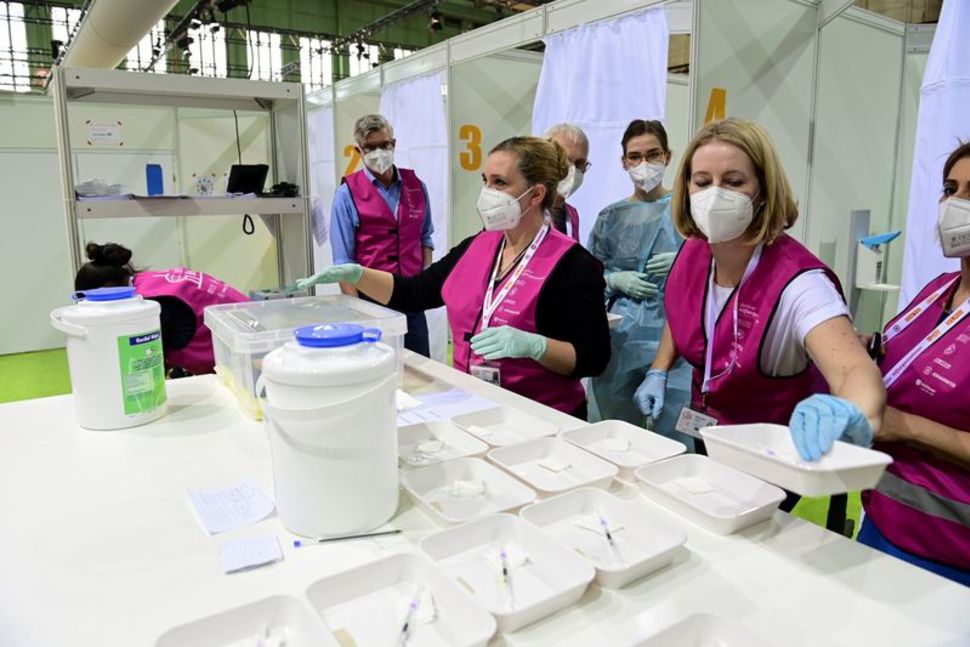 BERLIN — Germany, France, Italy and Spain became the latest countries today to suspend use of AstraZeneca’s COVID-19 vaccine over reports of dangerous blood clots in some recipients, though the company and European regulators have said there is no evidence the shot is to blame.

AstraZeneca’s is just one of three vaccines in use on the continent. But the cascading number of nations raising the alarm is another setback for the European Union’s vaccination drive, which has been plagued by shortages and other hurdles and is lagging well behind the campaigns in Britain and the United States.

The EU’s drug regulatory agency called a meeting for Thursday to review experts’ findings on the AstraZeneca shot and decide whether action needs to be taken.

The furor comes as much of Europe is tightening restrictions on schools and businesses amid surging cases of COVID-19.

Leading public health agencies, including the World Health Organization, say that millions of people have received the AstraZeneca vaccine without experiencing blood clotting issues, and they caution that experts have not found a causative link between the vaccine and the conditions.

“The decision today is purely precautionary. It is a purely technical and not a political decision. And that is why I am following the recommendation of the Paul Ehrlich Institute here,” Spahn said, adding that cases were very rare.

The PEI said in a statement that more instances of coagulation disorders had been reported following vaccination with AstraZeneca’s shot since Thursday.

The institute noted a “conspicuous accumulation” of cases of a very rare cerebral vein thrombosis together with lack of blood platelets known as thrombocytopenia and bleeding.

The European Medicines Agency (EMA) said on Friday that several cases of immune thrombocytopenia, a lack of platelets in the blood that can lead to bleeding and bruising, had been reported under its vaccine safety monitoring process.

It added at the time it would assess reports of the condition after vaccines by AstraZeneca, Pfizer/BioNTech, and Moderna had been given.

Several EU countries have called a halt to the AstraZeneca vaccine after reports from Denmark and Norway of possible serious side-effects, including bleeding and blood clots.

Spahn said on Monday the outcome of the review was open and he was counting on the EMA to come to a decision and recommendation ideally this week.

The EMA has said that as of March 10, a total of 30 cases of blood clotting had been reported among close to 5 million people vaccinated with the AstraZeneca shot in the European Economic Area, which links 30 European countries.

Many millions of people in Britain have so far received the British-Swedish pharma company’s vaccine.

Spahn said there have been seven reported cases that could be related to vein thrombosis out of 1.6 million vaccinations in Germany.

The health minister for the state of Thuringia called the decision to halt AstraZeneca vaccinations a “disaster.”

Meanwhile, the Netherlands on Sunday joined a fast-growing list of countries suspending use of AstraZeneca’s COVID-19 vaccine after reports of unexpected possible side effects from the injection.

The vaccine will not be used until at least March 29 as a precaution, the Dutch government said in a statement.

The announcement will lead to delays in rolling out shots in the Netherlands, which had pre-ordered 12 million doses of AstraZeneca’s vaccine.

Health authorities had scheduled around 290,000 AstraZeneca injections in the coming two weeks.

The move, which follows a similar decision by Ireland earlier in the day, is based on reports from Denmark and Norway of possible serious side effects, the government said.

Three health workers in Norway who had recently received thevaccine were being treated in hospital for bleeding, blood clots and a low count of blood platelets, Norwegian health authorities said on Saturday.

No such cases had been found yet in the Netherlands, the Dutch Health ministry said, adding there was no proof yet of a direct link between the vaccine and the reports from Denmark and Norway.

“We have to make sure everything is right, so it is wise to pause for now.”

AstraZeneca said on Sunday a review of safety data of people vaccinated with its COVID-19 vaccine has shown no evidence of an increased risk of blood clots.

But De Jonge said his decision was informed by new reports, which would now be investigated by the European Medicines Agency (EMA).

Along with Denmark, Norway and Ireland, Iceland has also suspended the use of the vaccine over clotting issues, while Thailand became the first country outside of Europe to do so on Friday.

Italy’s northern region of Piedmont on Sunday said it would stop using a batch of AstraZeneca vaccines after a teacher died following his vaccination on Saturday. Austria also stopped using a particular batch last week.