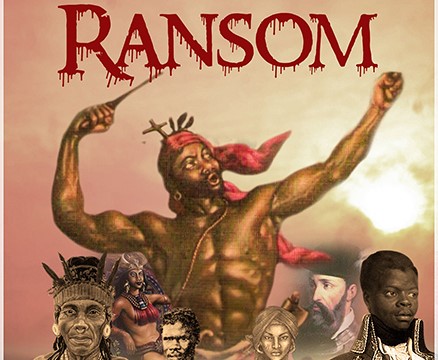 PORT-AU-PRINCE — Award-winning filmmaker, writer, and producer, Jonas Nosile wants the Haitian and Caribbean community to bring to life The Ransom.

This new film dramatizes a difficult and tumultuous journey of human suffering and resiliency, throwing light on the brutality faced by Taíno and African slaves in Hispaniola, while ending on a hopeful and positive note.

“Society has made great progress and come a long way, but this struggle for equality has been underway for more than 400 years—and still continues. The Ransom will show that the quest for equality is universal by telling the story of how, early in American history, a group of Africans brought to the Caribbean revolted to fight for their freedom and right this wrong,” Nosile said.

The Ransom tells this incredible story through Marie-Jeanne, a wealthy multi-racial Haitian woman living in France, who journeys back home for family affairs and is kidnapped. Her ransom, however, will require more than just money: she must travel back in time to reckon with her family’s complicity in Haiti’s tragic and violent history and face the truth about her own estrangement from her homeland.

To be filmed in Panama and Haiti with ethnically accurate casting and with dialogue in English/Castellan/Spanish-Taíno creole/French, the movie will highlight the daily life of a once-thriving indigenous people and the desire for liberty of African slaves, all against the backdrop of the Caribbean sugar plantation system.

“As the world continues to deal with the negative effects of discrimination, racism, and imbalances of power, The Ransom provides a difficult but necessary reminder of the past and uses it as a catalyst for change. The rough yet resilient tale will tap the emotions of audiences around the world and keep this important part of our history alive. There couldn’t be a better time than now for a film with a social message,” Nosile said.

Jonas’s last project, “Haiti: Triumph, Sorrow, and the Struggle of a People,” won numerous awards, including the Associated Press Award for Best Documentary, and was nominated for an Emmy Award (Regional) in Outstanding Societal Concerns Programs. For The Ransom, he is teaming up with film veterans in Hollywood including veteran screenwriter Mark Richard, a former executive at LD Entertainment.

For more information about this film and to learn how the Haitian and Caribbean community can help bring it to fruition, visit http://theransommovie.com.