CHARLOTTE AMALIE — A man charged with buying firearms in a straw purchase, who attempted to import them into the U.S. Virgin Islands, has reached a plea agreement with prosecutors, according to court documents.

Michael Kelly, pleaded guilty to one count of trafficking firearms in interstate and foreign commerce, which carries a maximum possible sentence of five years in prison, according to a plea agreement filed in U.S. District Court on Thursday.

Kelly completed the necessary forms provided by the U.S. Bureau of Alcohol, Tobacco, Firearms and Explosives (ATF), swearing that “he was the actual buyer and was not purchasing the firearms for another person,” according to the plea agreement.

Kelly then sold the guns to Naeem Smith for a total of $3,000, and Smith brought the weapons from Las Vegas to St. Thomas on April 28, 2016. At King Airport, Customs and Border Protection officers inspected Smith’s checked bag and discovered 19 weapons, including the four guns he had purchased from Kelly, who was not a licensed firearms dealer.

Kelly “knew that his co-defendant, Smith of Charlotte Amalie, was engaged in firearms trafficking in the U.S. Virgin Islands,” and that he was not legally permitted to sell him weapons, according to the plea agreement.

Kelly is facing between one year and 41 months behind bars. But prosecutors said they would recommend a sentence at the lower end of that range.

Kelly was arrested by warrant on April 14, so he has spent less than two months in federal custody in this case.

There are no other co-defendants named in federal court records, and it’s unclear if investigators have traced the origin of the other 15 guns Smith was found with.

Smith pleaded guilty to firearm trafficking charges in August 2016, and he was sentenced in March 2017 to serve 30 months in prison, pay a $3,000 fine, and serve three years’ supervised release, according to court records.

A straw purchase is any purchase where a person agrees to acquire a good for someone who is often unable or unwilling to purchase the good themselves, and the person transfers the goods to that other person after the initial transaction is complete. 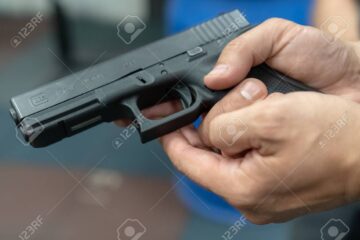