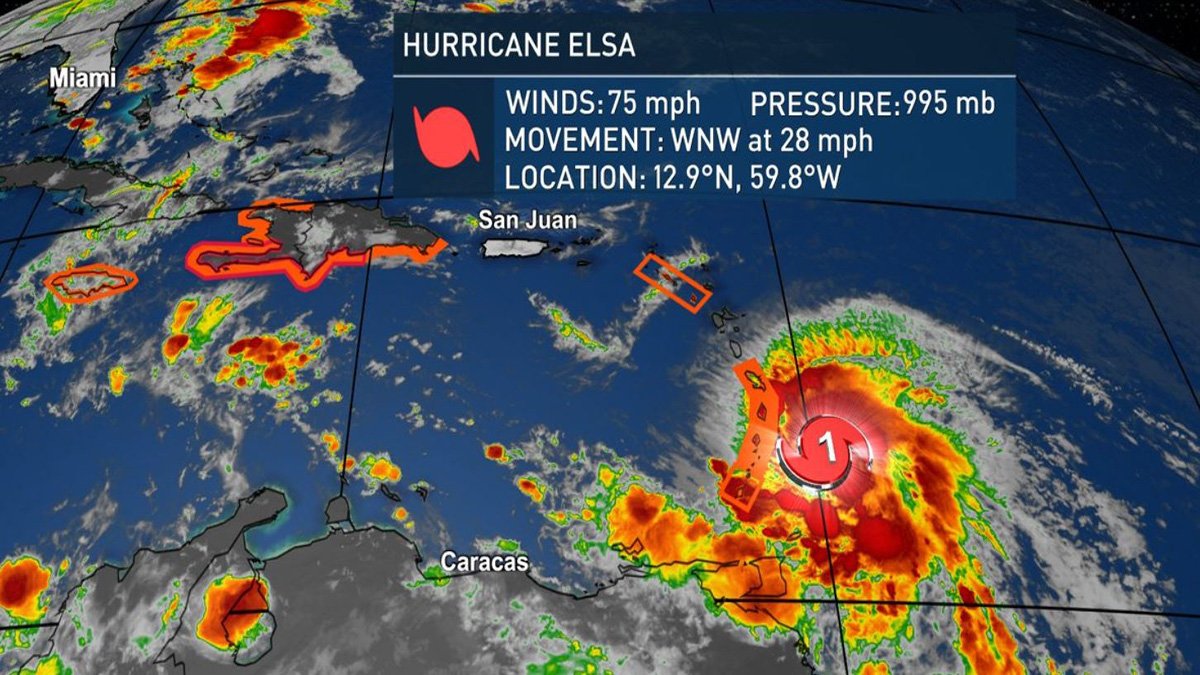 MIAMI — Elsa strengthened into the first hurricane of the season early this morning as makes its way towards the U.S. Virgin Islands, the National Hurricane Center (NHC) said.

The Category 1 storm unleashed heavy rains and winds on Barbados and then on St. Vincent and the Grenadines, which are struggling to recover from recent massive volcanic eruptions.

Elsa was located about five miles north of St. Vincent and was moving west-northwest at 29 mph. It had maximum sustained winds of 75 mph with tropical storm-force winds that extend outward up to 105 miles from the storm’s center, the NHC said.

“That level of sustained wind can blow down a lot of buildings and cause a lot of damage,” said St. Vincent Prime Minister Ralph Gonsalves. “I am pleading with you. Let us not take this hurricane lightly. This is not the time to play the fool.”

“Interests elsewhere in the Windward Islands, Leeward Islands, the Virgin Islands, Puerto Rico, the Dominican Republic, Cuba, and the Cayman Islands should monitor the progress of Elsa,” the National Weather Service said in its 11 a.m. advisory. “Additional watches and warnings will likely be required later today.”

Elsa is now on a northwest track and is expected to pass over the Windward Islands or southern Leeward Islands this morning before heading to the eastern Caribbean sea later today and near the island of Hispaniola tomorrow.

The hurricane is then projected to reach Jamaica and portions of Cuba by Sunday. The storm’s longer term trajectory projects Elsa to move into Florida next week after it travels up the Caribbean, reaching the southeastern Florida coast by 2 a.m. Tuesday and moving up to the northern part of the state by 2 a.m. Wednesday. The NHC notes the storm could bring “storm surge, wind and rainfall” to the Florida Keys and other parts of Florida, but the forecast remains uncertain.

Hurricane warnings are now in effect for Barbados, St. Lucia, St. Vincent and the Grenadines, with tropical storm warnings in effect for parts of the Dominican Republic, the coast of Haiti and Martinique.

The NHC reported at 8:30 a.m. Eastern time the areas under hurricane warnings will see hurricane conditions in the next few hours, with the storm projected to produce rainfall totals of approximately three to six inches, though some areas like Barbados could get as much as 10 inches of rain.

Puerto Rico may also get up to five inches of rain in some areas, while southern Hispaniola and Jamaica could see potentially up to 12 inches of rain over the weekend from tomorrow into Sunday.

The Category 1 storm now has maximum sustained winds of 75 miles per hour, the NHC reports.

The Associated Press reports officials in St. Vincent have encouraged some residents to evacuate in light of the hurricane, which could potentially cause flash flooding and mudslides.

Elsa is the earliest fifth-named storm on record, beating out last year’s Eduardo which formed on July 6, according to Colorado State University hurricane researcher Phil Klotzbach. He also noted that it’s the farthest east that a hurricane has formed this early in the tropical Atlantic since 1933. The 1991-2020 average date for the first Atlantic hurricane formation is mid-August.

The storm was forecast to bring three to six inches of rain with maximum totals of 10 inches today across the Windward and southern Leeward Islands.