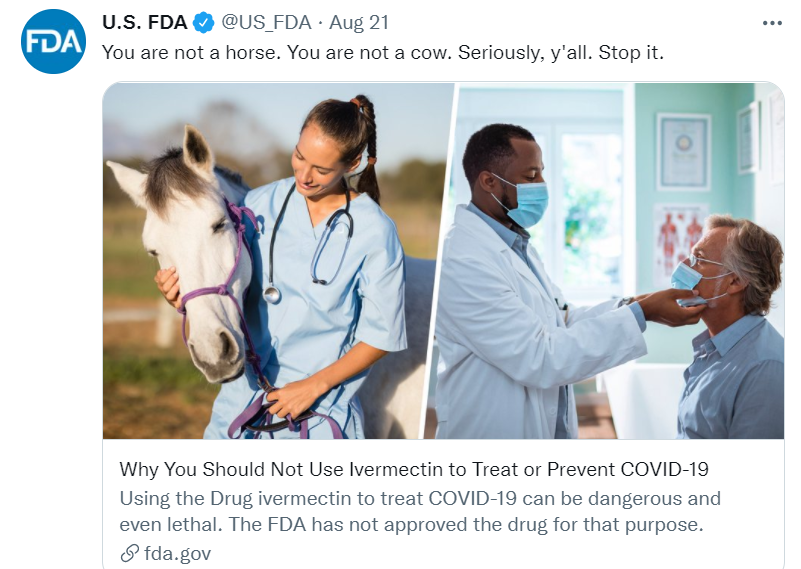 National health officials on Monday warned against using a drug called ivermectin for unapproved use as a medicine to prevent or treat COVID-19.

“I was unable to find any calls/cases from USVI related to the use of ivermectin in our database, but we did discuss the rapid rise of cases on the mainland that we have experienced,” Dr. Jay Schauben told the Virgin Islands Free Press this morning.  “Second, ivermectin is an FDA approved drug with FDA approval for use as a “de-worming” agent.  It does not have FDA approval for use as a treatment for COVID-19.”

Ivermectin has been approved only as an anti-parasitic treatment for humans and animals such as livestock and horses, has been the subject of a spike in calls to the Mississippi Poison Control Center.

The drugs produced for humans are different than the drug made for livestock, which is “highly concentrated and is toxic to people, and can cause serious harm,” the Mississippi State Department of Health said in an alert Monday. At least two people have been hospitalized with potential ivermectin toxicity after ingesting the drug produced for livestock, the state’s poison control center said Monday.

Interest in the drug is rising as the delta variant of the coronavirus has spurred higher COVID-19 transmission rates and increased concern among the vaccinated about becoming infected.

Multiple reports of patients treated or hospitalized after “self-medicating with ivermectin intended for horses” led the Food and Drug Administration to issue a warning Friday. “You are not a horse. You are not a cow. Seriously, y’all. Stop it,” the agency tweeted.

Ivermectin: What we know

Other forms of ivermectin are used to treat parasites in horses and cows and as a  heartworm medicine for dogs.

An ivermectin overdose can cause nausea, vomiting, diarrhea, low blood pressure, an allergic reaction such as itching or hives, seizures, dizziness, problems with balance, coma and potentially death, according to the FDA, which has warned consumers about the potential harm for months,

Dr. Schauben works for the Florida/USVI Poison Information Center based in Jacksonville, Florida,