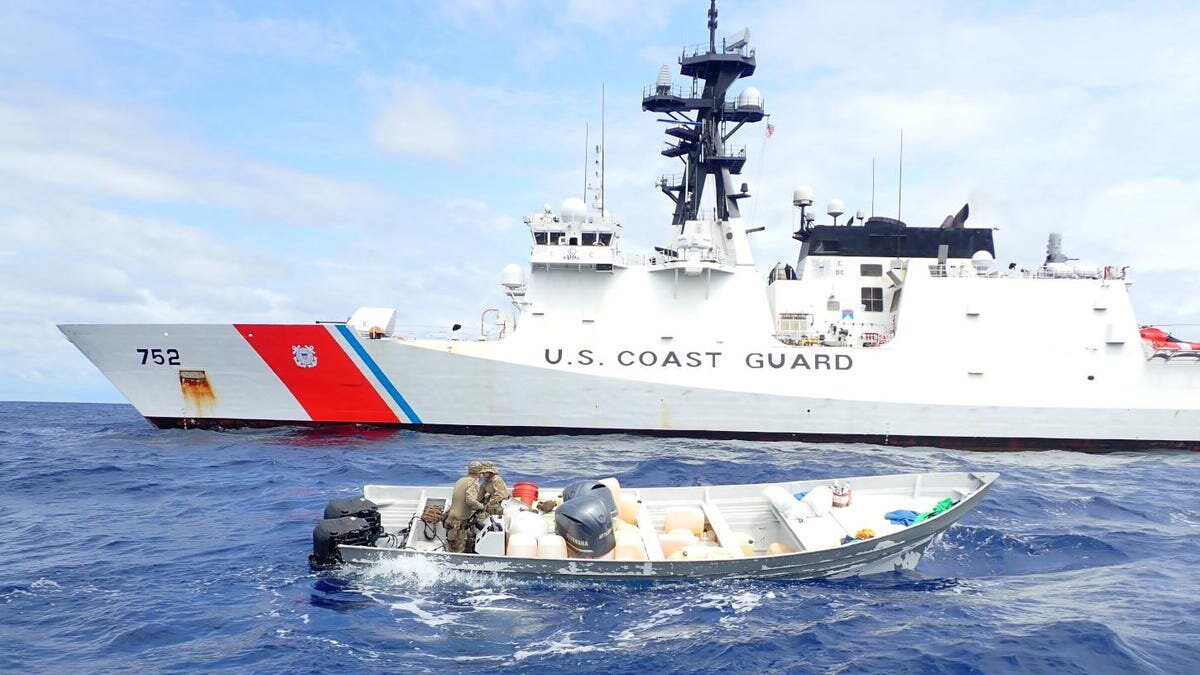 Carlos De La Rosa, 33, Alexis Sanchez Garcia, 32, Rafael Martinez, 29, and Elvis Manuel Rodriguez, 35, were charged in a criminal complaint with possession of cocaine onboard a vessel subject to the jurisdiction of the United States, U.S. Attorney Gretchen C.F. Shappert said.

The four me will appear in U.S. District Court in St. Thomas on Monday, September 13, 2021, for their advice of rights hearing, according to Shappert.

On August 30, 2021, United States Coast Guard Cutter (“CGC”) intercepted a white and blue, go-fast vessel with one outboard engine and two persons onboard at approximately 45 nautical miles south of Punta Salinas, DR. The go-fast vessel displayed no indicia of nationality and had packages and fuel barrels visible on deck. CGC TAMPA launched its over the horizon (“OTH”) vessel to intercept the go-fast vessel, but despite multiple warning shots, the go-fast vessel refused to stop.

Coast Guard Officers then disabled the non-compliant go-fast vessel, which they reasonably suspected of drug smuggling in international waters. As the OTH approached the disabled go-fast vessel, both persons on board the vessel began jettisoning packages and bales into the Caribbean Sea.

The bales of cocaine were loose kilos in a white burlap sack weighing approximately 520 kilograms at sea weight. The
occupants, later identified as Carlos De La Rosa and Alexis Sanchez Garcia, both claimed Dominican Republic nationality, but refused to make a claim for the vessel or who was the master of the vessel.

The vessel had no name, documentation, registration numbers, or homeport painted on its hull, and was therefore treated as a vessel subject to the jurisdiction of the United States.

Also, on August 30, 2021, CGC TAMPA intercepted a second white and blue, go-fast vessel with one outboard engine and two persons onboard, at approximately 45NM south of Punta Salinas, DR. The second go-fact vessel displayed no indicia of nationality and had packages and fuel barrels visible on deck. CGC TAMPA launched their OTH to intercept the go-fast vessel, and despite multiple warning shots, the go-fast vessel refused to stop.

Once disabled, the two persons on board that go-fast vessel began jettisoning electronic equipment and bales of suspected contraband into the sea. The occupants of the second go-fast vessel began dousing the vessel with fuel.
The CGC boarding team was unable to locate the jettisoned packages.

The individuals on board were identified as Rafael Martinez, 29, and Elvis Manuel Rodriguez, 35. Both claimed DR
nationality, and the master verbally claimed the Dominican Republic flag for the vessel.

The government of the Dominican Republic could neither confirm nor deny registry of the go-fast vessel.

The USCG therefore treated the vessel as one without nationality and enforced United States laws.

The detainees verbally admitted to acting as a decoy vessel for the go-fast vessel that was interdicted simultaneously with their vessel.

This case is being investigated by the USCG and the U.S. Drug Enforcement Administration (DEA). It is being prosecuted by Assistant United States Attorney Delia Smith.

United States Attorney Shappert reminds the public that a criminal complaint is merely a charging document and that all defendants are presumed innocent until proven guilty beyond a reasonable doubt.