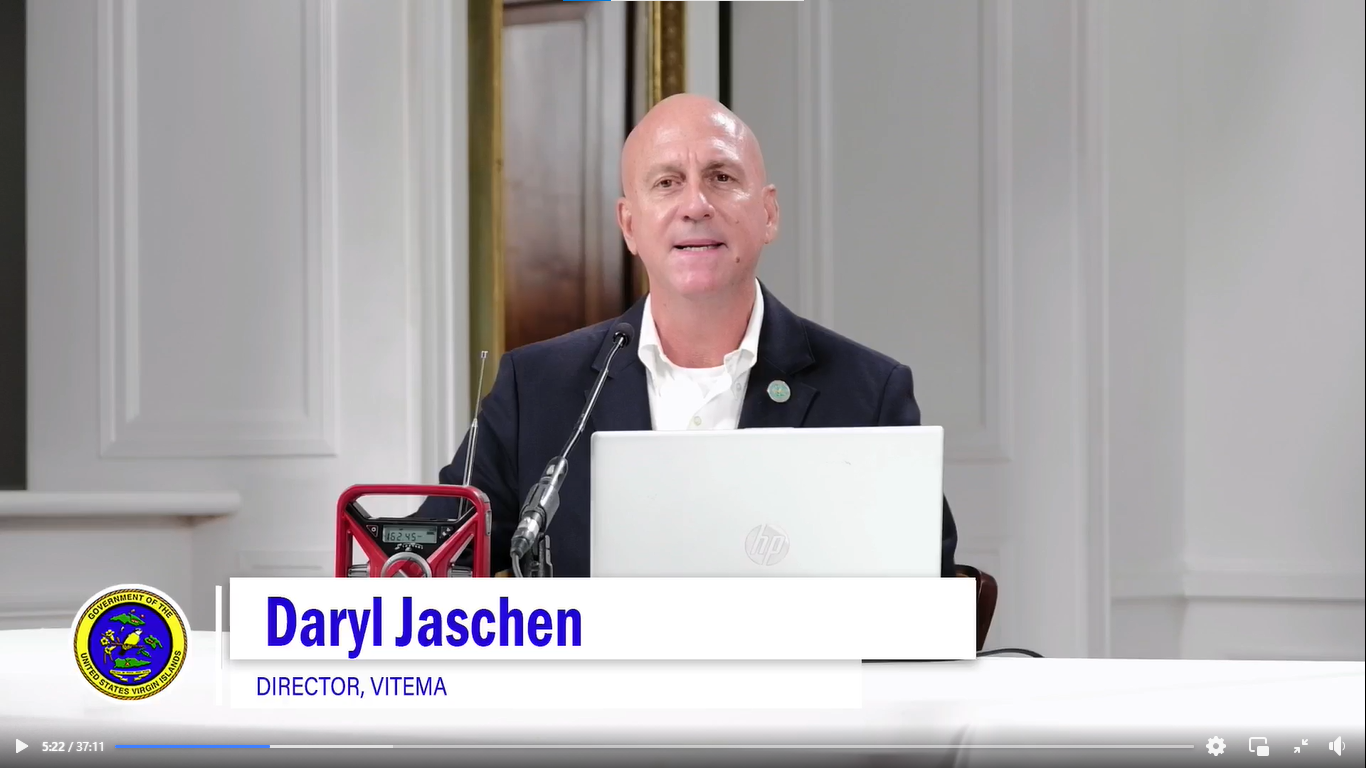 Speaking at the Government House press briefing, Jaschen said the territory should still remain vigilant and warned that “life-threatening maritime conditions” could occur in the northern U.S. Virgin Islands as a result of the passing of the storm.

“There are no coastal warnings or watches in effect at this time,” he said. “Sam is projected to pass within 400 miles of St. Thomas and St. John late Wednesday evening early (Thursday) morning. Sam is a small, but strong hurricane, with hurricane-force winds going out 30 miles and tropical storm force winds going out 105 miles. There’s only a three percent chance of tropical storm force winds impacting St. Thomas or St. John as it passes. However, there is a concern of strong ocean swells that may cause life-threatening maritime conditions and strong rip tides. U.S. Coast Guard is also monitoring Hurricane Sam and is ready to review the conditions if the approaching hurricane generates significant swells in the territory.”

Sam became one of the most powerful hurricanes so far this year with 150 mph winds on Sunday afternoon, according to the National Hurricane Center.

Sam was in the open ocean, however, and no immediate threat to land.

As of 5 p.m. today, Hurricane Sam was located about 700 miles east-southeast of the northern Leeward Islands and was moving northwest at 8 mph.

Sam was a top-end Category 4 hurricane with 150 mph winds, tying it with Ida for strongest hurricane so far this year. Category 5 winds begin at 157 mph.

The hurricane center said Sam could fluctuate in intensity over the next day and then could slowly start to weaken.

Sam was forecast to track to the west-northwest yesterday and then turn more to the northwest today.

The hurricane center’s forecast track shows the core of Sam moving north and east of the Leeward Islands. None of the islands was in the cone of uncertainty as of yesterday.

Bermuda will need to keep a close eye on Sam’s track, but so far the cone of uncertainty doesn’t reach as far as the island.

The hurricane center is also tracking three other tropical waves. Two are between Sam and the coast of Africa and one, farther north, is what is left of Tropical Storm Peter.

Peter’s remnants now have a 50 percent chance of redeveloping into a depression over the next five days, forecasters said. That’s up from 30 percent earlier today.

The two other waves close to Africa will bear also watching.

One of them is expected to move into the eastern Atlantic today and could become a tropical depression by mid-week, the hurricane center said.

Forecasters last night said an area of low pressure appeared to be forming several hundred miles southwest of the Cabo Verde Islands. It is forecast to head to the west and could become a depression by mid-week as well.

There are only two names left on 2021′s list of storm names for the Atlantic: Victor and Wanda.

After that forecasters would have to use a supplemental list of storm names.

In years past the Greek alphabet has been used, but the World Meteorological Organization changed that practice this year and instead will use a different supplemental list of names that starts with Adria and ends with Will.

1. Satellite-derived wind data indicate an elongated area of low pressure associated with the remnants of Peter is located a few hundred miles southeast of Bermuda. Showers and thunderstorms have become a little better organized since last night, and environmental conditions are marginally conducive for some further development of this system. Peter could briefly become a tropical depression again during the next day or two while it moves northeastward at about 10 mph. By midweek, environmental conditions are expected to become unfavorable for further development. * Formation chance through 48 hours…medium…50 percent. * Formation chance through 5 days…medium…50 percent.

2. Disorganized showers and thunderstorms are associated with a broad area of low pressure located several hundred miles southwest of the Cabo Verde Islands. Environmental conditions are forecast to be conducive for further development of this disturbance, and a tropical depression is likely to form around midweek while it moves westward to west-northwestward at 5 to 10 mph over the central tropical Atlantic. * Formation chance through 48 hours…low…30 percent. * Formation chance through 5 days…high…80 percent.

3. A tropical wave is expected to move off of the west coast of Africa later today. Upper-level winds are forecast to be conducive for gradual development thereafter, and a tropical depression is likely to form in a few days while the system moves westward to west-northwestward at 10 to 15 mph over the far eastern tropical Atlantic. * Formation chance through 48 hours…low…30 percent. * Formation chance through 5 days…high…80 percent.