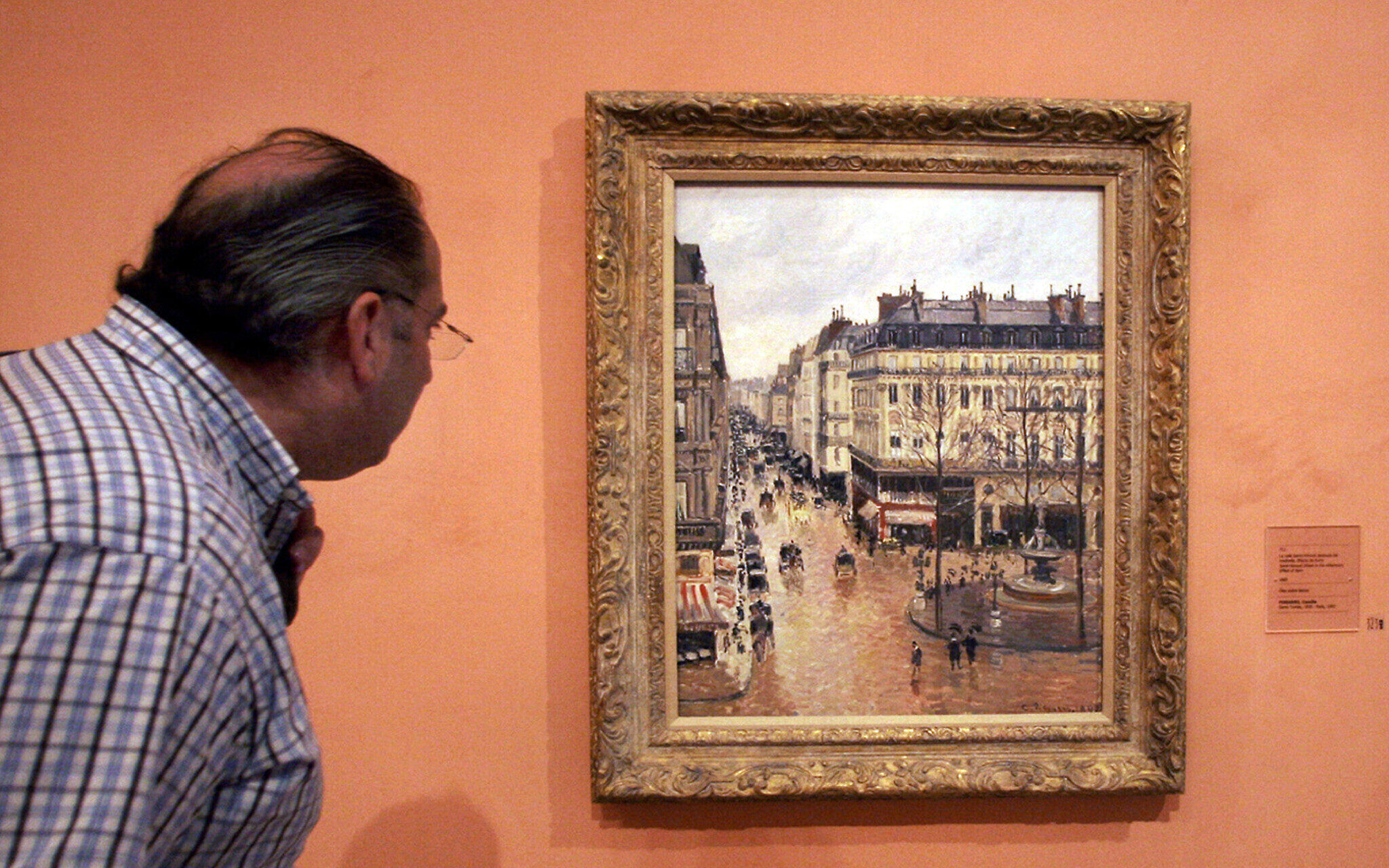 WASHINGTON — A California man and a Spanish museum locked in a dispute over a valuable impressionist masterpiece stolen by the Nazis should be able to agree on one thing, Justice Stephen Breyer said Tuesday during arguments in the case at the Supreme Court.

“Can everyone agree that this is a beautiful painting?” Breyer asked near the end of an hour of arguments. The painting is a streetscape, now worth millions, by French impressionist Camille Pissarro of St. Thomas.

The case itself is not directly about ownership of the painting but about how to decide the case, which has been going on since 2005. Lower courts had sided with the museum.

On the other side is San Diego resident David Cassirer. His great-grandmother Lilly Cassirer Neubauer, a German Jew, at one time owned the Pissarro oil painting. The 1897 piece, whose title translates to “Rue Saint-Honoré in the Afternoon, Effect of Rain,” is one of a series of 15 that Pissarro painted of a Paris street as seen from his hotel window.

In 1939, in order to get visas for herself and her husband to leave Germany, Neubauer was forced to surrender the piece to a Nazi art appraiser. She was paid about $360, well below the painting’s value, and the money went into an account she was blocked from accessing.

The painting changed hands a number of times since then but is now in the collection of a Spanish museum, the Thyssen-Bornemisza National Museum in Madrid, which has fought to retain it. It has been said to be worth more than $30 million.

Lower courts found the museum to be the lawful owner of the painting while also criticizing Spain for not living up to commitments to return Nazi-looted art.

Even if Cassirer wins at the high court, and he has the backing of the Biden administration, a lower court decision saying Spanish law applies in the case may mean he ultimately loses, Justice Sonia Sotomayor said.

“I believe the district court said that both California law and federal common law would adopt Spanish law. Why is it that we’re here if you lose under both?” she asked Cassirer’s attorney David Boies. Boies said a federal appeals court didn’t address the issue of California law.

Boies is the third attorney to argue by phone because of a positive test since the court returned to hearing arguments in person in October after more than a year and a half hearing arguments by phone. The court is not allowing the public to attend arguments, and arguing attorneys must test negative.

For many years the Pissarro painting was believed to have been lost or destroyed during the war. In 1958 Neubauer reached a monetary settlement with the German government, but she didn’t give up rights to try to pursue the painting if it turned up.

In fact, the painting had traveled to the United States, where it spent 25 years in the hands of different collectors before being purchased in 1976 by Baron Hans Heinrich Thyssen-Bornemisza of Lugano, Switzerland. In 1993, the painting was one of 775 works the baron sold to Spain for more than $300 million. The Thyssen-Bornemisza National Museum, a renovated palace, houses the collection.

In 2000, Neubauer’s grandson Claude Cassirer discovered that the painting was not lost but on display in the museum. Spain rejected his attempts to get it back, however, and he ultimately sued in the United States. Claude Cassirer died in 2010. It’s his son David now fighting for the piece’s return.

Pissarro was born in St. Thomas in 1830 when it was part of the Danish West Indies.