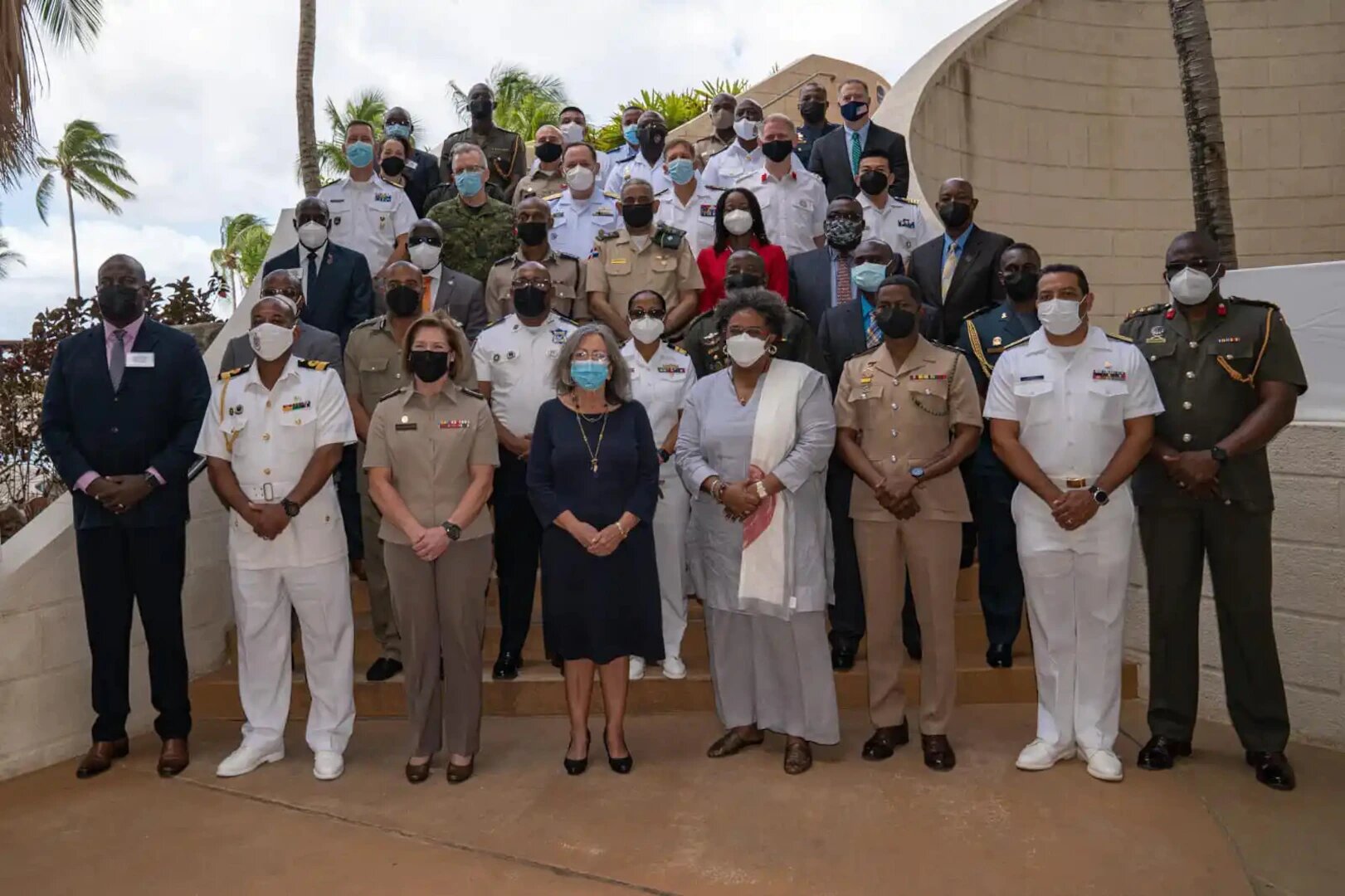 The two-day conference, co-hosted by the Barbados Defence Force and SOUTHCOM, focused on ways to enhance security cooperation to deal with a host of regional challenges and threats, like the continuing effects of COVID-19, natural disasters, climate change, cyberattacks and competition between authoritarianism and democracy.

“[The Caribbean] is a vitally important region to SOUTHCOM, the U.S. government, and the American people. With authoritarianism on the rise, protecting human rights, and helping our democracies deliver for our people is more important than ever before,” Richardson told attendees during the conference’s opening ceremony.

Barbados Prime Minister Mia Mottley spoke during the opening of CANSEC 22 and highlighted the importance of security cooperation.

“Much has been said this morning already with respect to the common threats that we now face. I don’t think any of us needs to be reminded of it, because we live it each and every day,” said Mottley. “But our role is not only cooperation. Our role is also to be able to give confidence to our populations that we have this, or as we say in Barbados and the Caribbean: we got this.”

Representatives from Canada, Mexico, France, the United Kingdom and the Netherlands also took part, along with representatives from regional organizations like the Caribbean Disaster Emergency Management Agency, the Caribbean Community Implementation Agency for Crime and Security, the Regional Security System, the Inter-American Defense Board and the Inter-American Defense College.

During the CANSEC 22 opening ceremony, Deputy Assistant Secretary of Defense for the Western Hemisphere Daniel Erickson spoke about the threats and challenges facing the Caribbean and what the Department of Defense is doing to work with Caribbean partners to keep the region a “zone of peace.”

“The challenges before us are many, but the way forward is through trust and cooperation. Only through building trust and deepening cooperation will we be able to meet these challenges successfully,” said Erickson.

Richardson said transnational criminal organizations (TCOs) pose “one of the most imminent threats” in the region.

“TCOs are poisoning the Caribbean and American people, trafficking in drugs, arms, humans, and other illicit products, and worsening corruption. Local gangs engage in violent crime, kidnapping, and sexual assault.”

To deal with the threat, SOUTHCOM works with regional partners, including in the Caribbean, to coordinate the tracking and interdiction of illicit traffickers.

During CANSEC, leaders discussed that coordination, including cooperation with Joint Interagency Task Force-South, which conducts detection and monitoring operations in the region, and the use of the Cooperative Situational Information Integration (CSII) system, an online system that allows the United States and partner nations to share air-, maritime- and land-domain awareness information to counter illicit trafficking in the Caribbean.

“I believe that our cooperation over the course of the period of time that we have been working in CANSEC has been to our benefit. This is best seen, of course, in humanitarian assistance and disaster relief,” said Mottley. “In the Eastern and Southern Caribbean, apart from the other wars that are traditional, we fight now daily, weekly, and monthly, the war against the climate crisis.”

In addition to direct support to disaster relief missions, SOUTHCOM routinely provides millions of dollars of funding and projects to help Caribbean nations bolster their disaster response capabilities. Between fiscal year 2019-present, the Department of Defense has executed 180 projects totaling over $35M for disaster preparedness as well as 15 projects costing about $14M for health and education.

CANSEC discussions also focused on upcoming multinational exercises, like the SOUTHCOM-sponsored Tradewinds, which is focused on Caribbean security and provides U.S. military and partner nation counterparts opportunities to better work together to counter threats and respond if needed in a disaster.

“These areas of cooperation are what true partnerships among fellow democracies look like. This is our shared neighborhood. Neighbors encourage each other, help each other succeed, lift each other up. And as we do so, there are no strings attached, and no fine print,” said Richardson.

“We do it because that’s what good neighbors do. We do it because we are always stronger when we work together. It’s how we all ensure that the Caribbean remains a Zone of Peace — today, tomorrow, and always.”

In addition to the conference sessions and briefings, Richardson also held bilateral meetings with many of the defense leaders to discuss continued cooperation.

Accompanied by U.S. Amb. Jean Manes, SOUTHCOM Civilian Deputy to the Commander and Foreign Policy Advisor, the commanding general also met with leaders from Canada, France, the Kingdom of the Netherlands and the United Kingdom to enhance the Framework for Western Hemisphere Allied Collaboration. The multilateral framework seeks to integrate and synchronize allied efforts in support of partner nations in the region.

Barbados last hosted CANSEC almost two decades ago when the region’s defense leaders met in Bridgetown for the regional security conference in 2004.