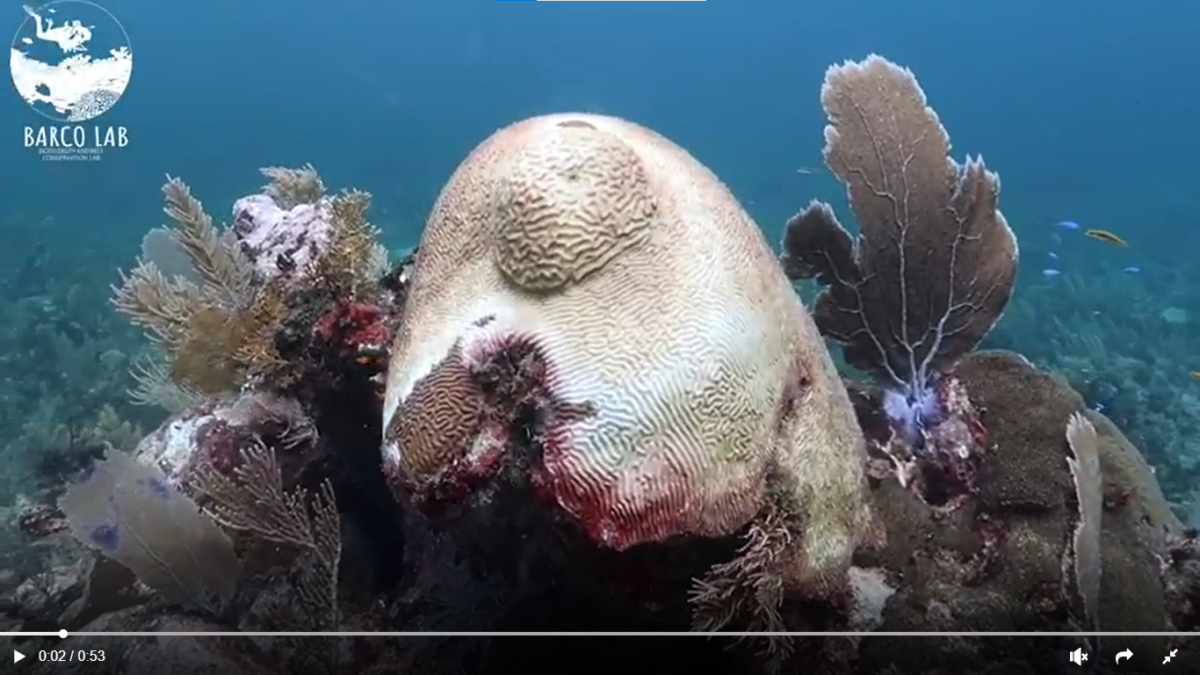 COZUMEL — A new coral disease is quickly circulating in the Caribbean, killing as much as 94 percent of certain types of coral species in the region, according to a study published Thursday in the journal Communications Biology.

Researchers found that an outbreak of stony coral tissue loss disease (SCTLD) that was first reported in Florida in 2014 is likely to become “the most lethal disturbance ever recorded in the Caribbean.” The outbreak reached the northern Mesoamerican Reef, the largest barrier reef in the Western Hemisphere, off the coast of Mexico, Guatemala, Belize and Honduras by summer 2018 and spread across the entire roughly 450-kilometer reef system within a few months, according to the study.

Out of more than 29,000 coral colonies the researchers surveyed between July 2018 and January 2020, 17 percent showed signs of having died recently by the time of survey. An additional 10 percent had been affected by the disease.

The researchers said the area is a well-known “hot spot” for diseases, many of which have significantly reduced coral populations in the past. One outbreak of another disease in the late 1970s led to the loss of almost 80 percent of two major reef-building corals, reducing the functionality of the reef.

The researchers also said that human-induced factors like rising sea levels and reduced water quality are increasing the risk of diseases that disrupt an ecosystem’s stability. They said environmental conditions, such as nutrient concentrations, likely influence the prevalence of SCTLD, though higher water temperatures appear not to have a direct effect.

“SCTLD now threatens many coral species that serve as important reef-builders and habitat providers in most of today’s Caribbean reefs,” the study states.

The researchers did take note that the prevalence of the disease was worse closer to areas with coastal development. Most sites that are experiencing more than 50 percent prevalence were located in the northernmost region, which has the most urban areas, hotels and tourist spots that cause pollution and runoff, researcher Lorenzo Álvarez-Filip told The Washington Post.

Robert H. Richmond, the director and a research professor at the University of Hawaii at Manoa’s Kewalo Marine Laboratory, said the wider region, including the coasts of the Caribbean, Florida and Mexico, has recently experienced a “triple whammy”: severe hurricanes that can topple or smother coral, coral bleaching tied to climate change and elevated seawater temperatures, and now the spread of disease.

Corals, Richmond said, require sufficient density to carry out their elegant once-a-year spawning, which is cued by the lunar cycle. They simultaneously release eggs and sperm — gametes — into the water. As corals are unable to move, their gametes float up to the water’s surface, fertilize, then drop back down to begin growing into new coral.

“As corals die and the distance between living colonies increases, the chance of spawning events succeeding drops precipitously,” Richmond said.

Some species’ populations are so low, and their ability to reproduce so compromised by changing environmental factors, including water quality — suffering under a “rogue’s gallery of chemicals” from sewer outfalls — that there is little hope for a recovery without some form of human intervention, he said.

Although it would be difficult to stop the spread of the contagious disease, Álvarez-Filip said efforts are underway — including reef restoration, the preservation of genetic material and the administration of probiotics to increase resilience.

But “these efforts will only succeed if we change the regional conditions,” Álvarez-Filip said. “We may invest a lot of effort, a lot of money to try to rescue and restore coral,” he said. “But at the end, if we still have climate change, we still have deforestation; we still have pollution.”

The health of corals can be likened to that of a bank account, with live corals as the principal and reproduction the interest, Richmond said.

“If you put corals back into an area of poor water quality next to an urbanized area, you’re basically putting it into a bank account that not only has no interest but has a high monthly fee,” he said. “Nothing that’s produced there is going to end up receiving a population, and, eventually, those corals are going to die and need to be replenished. And so you go bankrupt.”