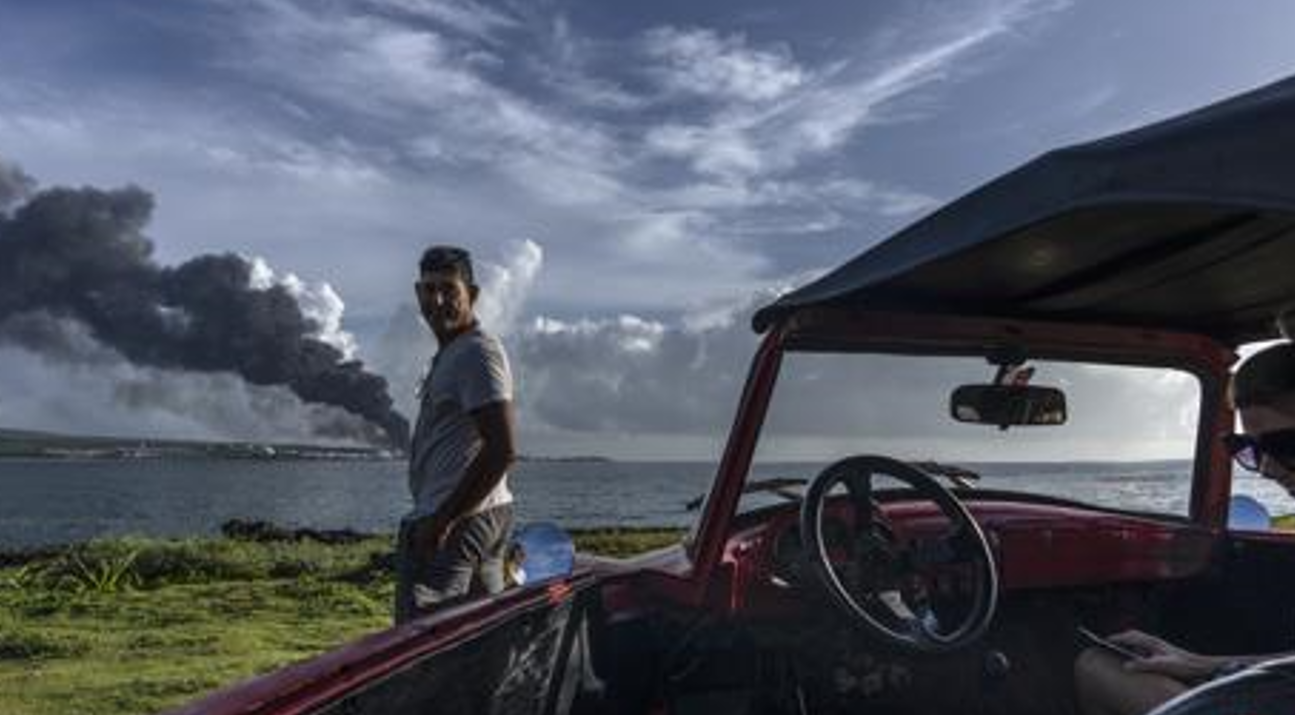 HAVANA — A deadly fire that began at a large oil storage facility in western Cuba spread today, threatening to plunge the island into a deeper energy crisis as it forced officials to shut down a key thermoelectric plant.

Flames around dawn enveloped a third tank that firefighters had tried to cool as they struggle to fight the massive blaze that began just days after the government announced scheduled blackouts for the capital of Havana.

At least one person has died and 125 are injured, with another 14 reported missing ever since lighting struck one of the facility’s eight tanks on Friday night. A second tank caught fire on Saturday, triggering several explosions at the facility, which plays a key part in Cuba’s electric system.

“The risk we had announced happened, and the blaze of the second tank compromised the third one,” said Mario Sabines, governor of the western province of Matanzas where the facility is located.

Firefighters had sprayed water on the remaining tanks over the weekend to cool them but failed to stop the fire from spreading. The government’s power company announced this afternoon that the fire had forced the shut down a thermoelectric plant that provides power to the island’s western region after it ran out of water, according to the official Cubadebate website. No further details were immediately available.

The governments of Mexico and Venezuela have sent special teams to help extinguish the fire, with water cannons, planes and helicopters fighting the fire from several directions as military constructions specialists erected barriers to contain oil spills.

Local officials warned residents to use face masks or stay indoors given the billowing smoke enveloping the region that can be seen from the capital of Havana, located more than 65 miles away. Officials have warned that the cloud contains sulfur dioxide, nitrogen oxide, carbon monoxide and other poisonous substances.

The majority of those injured were treated for burns and smoke inhalation, and five of them remain in critical condition. A total of 24 remain hospitalized. Over the weekend, authorities found the body of one firefighter as relatives of those still missing gathered at a hotel to await news about their loved ones.

Sabines and Cuban President Miguel Díaz-Canel said it was impossible to search for the missing firefighters given the roiling temperatures.

The blaze at the Matanzas Supertanker Base in Matanzas city prompted officials to evacuate more than 4,900 people, most of them from the nearby Dubrocq neighborhood. The facility’s eight huge tanks hold oil used to generate electricity, although it wasn’t clear how much fuel has been lost as a result of the flames. The first tank that caught fire was at 50 percent capacity and contained nearly 883,000 cubic feet (25,000 cubic meters) of fuel. The second tank was full.

Jorge Piñon, director of the Latin America and Caribbean Energy Program at the University of Texas, said officials should inspect the walls of tanks that aren’t on fire to ensure they weren’t affected. He also warned that the government must be careful before bringing the system back online once the fire is extinguished.

If not, there’ll be another catastrophe,” he said. “Unfortunately, this is going to take time.”

Piñon noted that the facility receives Cuban crude oil — operating an oil pipeline that crosses the center of the country — to be transferred via small tankers to the thermoelectric plants that produce electricity. It is also the unloading and transshipment center for imported crude oil, fuel oil and diesel, with Cuba producing only half of the fuel required to keep its economy afloat.

The blaze comes as Cuba struggles through a deep economic crisis and faces frequent power outages amid a sweltering summer, issues that helped unleashed unprecedented antigovernment protests last year. Officials have not provided a preliminary estimate of damages.