MIAMI — Could there be a new tropical storm soon?

It’s possible, but it will have to develop quickly, according to the National Hurricane Center.

Forecasters there have been watching an area of disturbed weather in the northwest Caribbean for most of the week. The disturbance was designated Potential Tropical Cyclone 18 on Friday afternoon, and the hurricane center said a tropical depression or storm (Tropical Storm Philippe) could form as soon as tonight.

The system doesn’t have a defined center of circulation but it could bring tropical storm conditions to Cuba and the Bahamas, which is why the hurricane center began issuing advisories on Friday afternoon.

And warnings have been issued as well. A tropical storm warning has gone up for parts of Cuba and the northwestern Bahamas, and a tropical storm watch is in effect for the central  Bahamas.

Those in the Florida Keys and South Florida were also advised to keep an eye on the system.

As of 4 p.m. CDT Friday, Potential Tropical Cyclone 18 was located about 415 miles south-southwest of Havana, Cuba, and was moving north-northwest at 6 mph.

The storm had maximum sustained winds of 40 mph. Tropical storm force winds begin at 39 mph. Forecasters said the highest winds extended outward about 80 miles mainly to the south of the center.

The trough of low pressure over the northwestern Caribbean Sea has a 60 percent chance of strengthening into a tropical cyclone over the next two days, the National Hurricane Center (NHC) said today.

The trough produced 1.3 inches of rainfall on St. Croix today, according to the Weather Underground.

Environmental conditions are expected to be conducive for development today and tomorrow, and a tropical depression could form as the system moves northward over the northwestern Caribbean Sea, the NHC said.

The system is expected to produce heavy rainfall over the Cayman Islands, Jamaica, and portions of Cuba during the next day or two, it said, adding, rains are seen spreading northward across portions of South Florida and the Keys and over the northwestern Bahamas. 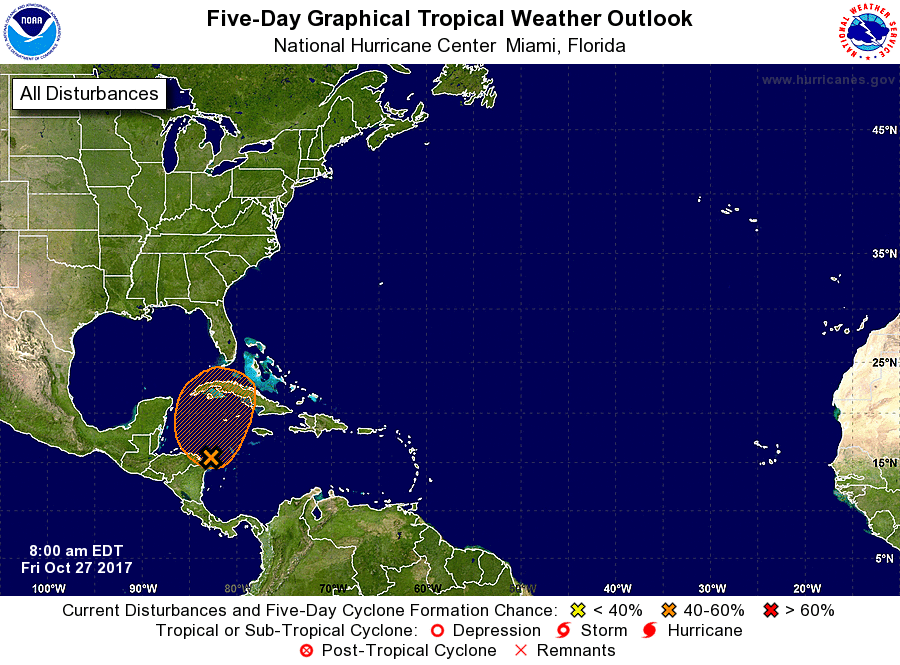