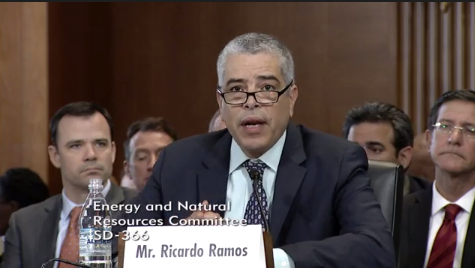 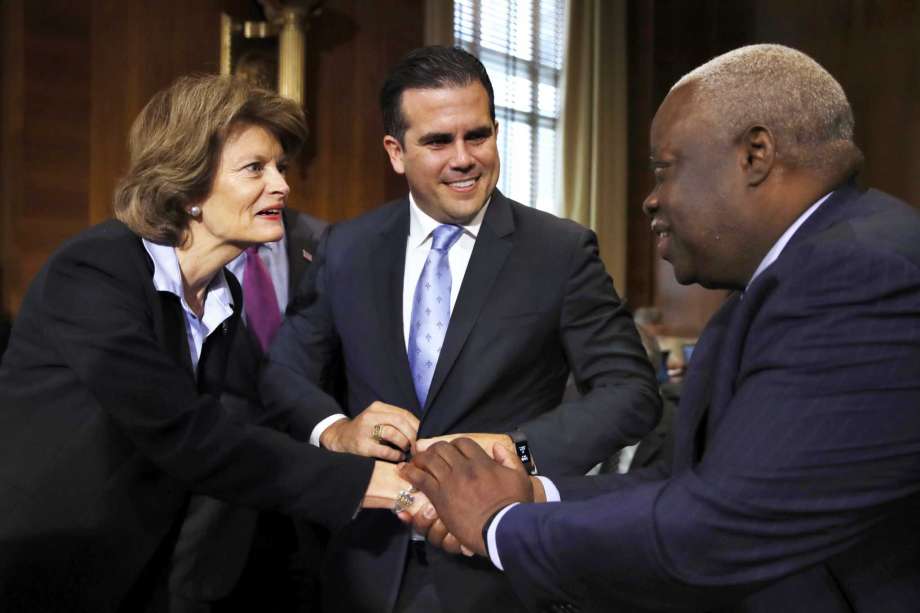 BIG MISTAKE: Gov. Kenneth Mapp did not distance himself, or the territory, from the PREPA Whitefish Scandal that has inflamed the U.S. Congress. Here Senator Lisa Murkowski (R-Alaska) and Gov. Ricardo Rossello join hands with Mapp.

“I cannot overstate the extraordinary challenges that we have faced,” said Ricardo Ramos, director of the Puerto Rico Electric Power Authority (PREPA).

The decision by PREPA to instead retain contractor Whitefish Energy Holdings LLC to help restore electricity after the storm drew sharp criticism during the three-hour hearing.

About 49 percent of the island’s power has been restored nearly two months after Hurricane Maria devastated the grid on Sept. 20, Ramos said.

Cantwell countered that utilities were eager to come to Puerto Rico’s aid at cost, rather than charging the inflated prices that Whitefish required. If logistical challenges had been raised with mainland utilities, they would have overcome the hurdles, she said.

“The notion someone comes in to gouge the Puerto Rico government and U.S. taxpayer, charging them exorbitant rates, than writing a contract so it can’t be reviewed properly, was a great injustice to the U.S. taxpayer,” Cantwell said.

In response to questions, Ramos said he did not know of any kickbacks paid by Whitefish.

But Ramos maintained that PREPA was unable to participate in mutual aid agreements after the storm.

“After the devastation of Hurricane Maria I believed that PREPA was unable to meet the requirements for mutual assistance,” Ramos said.

The utility required contractors who could provide self-contained “military-style” units, he said because it lacked water, ice, housing and fuel for trucks.

However, PREPA canceled the Whitefish contract just over a month after agreeing to pay the tiny Montana company $300 million to restore power to the storm-hit U.S. territory. The cancellation followed criticism that the contract blocked sufficient oversight of costs and profits.