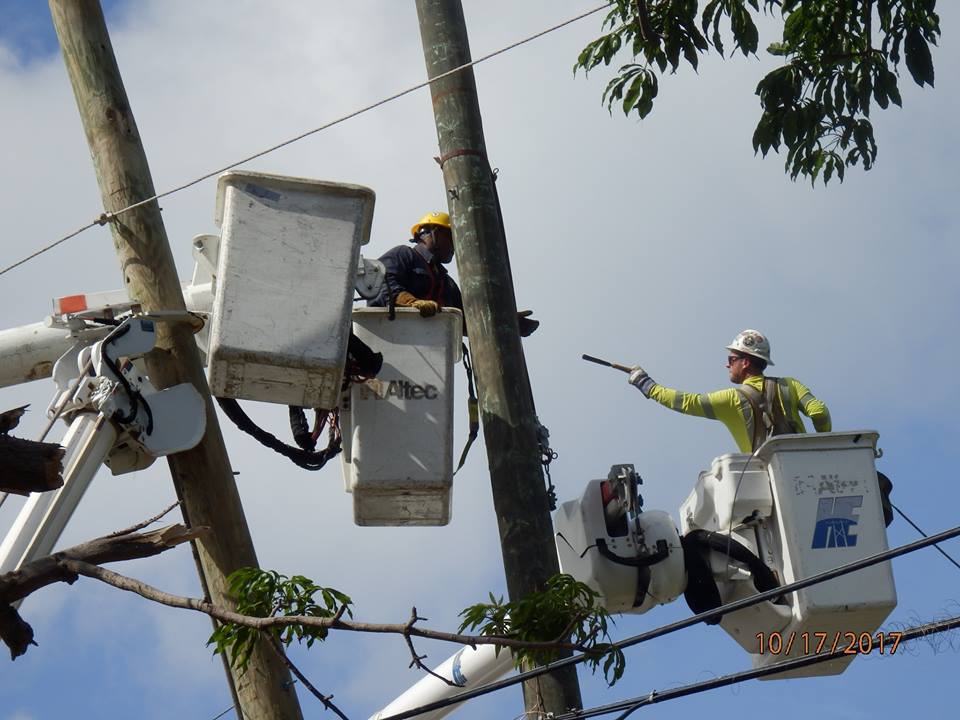 CHRISTIANSTED — The electrical company that won the contract for the Virgin Islands  said that every customer on St. Croix should have electricity by April Fools day (April 1, 2018).

PSEG, which stands for Public Service Enterprise Group, Inc. said some of its workers might be allowed to work only six days a week until full recovery — to avoid work burnout.

“The problem St. Croix is facing is that 48,000 electrical poles have have to be replaced and re-set,” a source close to PSEG. “There is only so fast that that can happen. We are working as hard as we can, as fast as we can. Whatever is humanly possible, mechanically possible, we are doing to connect the good people of St. Croix to electricity ASAP.

The Virgin Islands Water and Power Authority (WAPA) and Gov. Kenneth Mapp have been unwilling to be transparent about how much of St. Thomas, St. John and St. Croix have been connected on a daily basis.

The last time WAPA and Mapp spoke to the issue, they said 19 percent of St. Croix was re-connected to electricity. By Oct. 18, only 1.6 percent of the Big Island was re-connected, according to the Federal Emergency Management Agency (FEMA).

In the meantime, the lack of knowledge about what needs to be accomplished (the number of poles needed to be replaced on St. Thomas and St. John were not immediately available from the PSEG source) and what percentage of the islands have been re-connected to electricity — only adds to the misery index of living here during the emergency.

The New York-based electrical company won the contract for the Virgin Islands based on the intercession of Gov. Andrew Cuomo (D-NY) who visited the territory Sept. 15 after Hurricane Irma. PSEG signed the sweetheart deal with the territory soon after Cuomo visited at Mapp’s invitation.

PSEG said that its contract is open-ended, meaning that if they need to stay through April 2018 or later to re-connect St. Croix, they can.

The Long Island-based company has in turn contracted out some of the work here to other subcontractors nationwide.

Mapp said at first that 90 percent of the territory would be re-connected to electricity by Christmas, he later walked that statement back and said that “the goal” is to have 90 percent of the Virgin Islands with power by Dec. 25.

“That date April 1, 2018 represents the date that the last customer who had power before the storm will be re-connected to electricity after the storm,” the source said. “If it takes longer, we will stay here. We will be here until the last WAPA customer is re-connected.”

HURRICANE RESTORATION UPDATE (according to WAPA)

• WAPA’s reconstruction and restoration crews continue to make steady progress across the territory with service being restored to a growing number of customers each day.

o On St. John Tuesday, a portion of the primary circuit from Peter Bay to Cinnamon Bay was energized and crews continued work on Feeder 7E.

o On St. Croix, customers on Feeder 4A were restored along Five Corners as well as in the Little Princess and La Grande Princess areas, with crews building out primary circuits toward Sion Hill and Rattan. Customers were restored in Estate Ruby and Peppertree Terrace along with the Christiansted Bypass. On Feeder 8B, poles are being framed and readied for primary circuit reconstruction while additional customers were energized in the Hannah’s Rest area. Efforts will continue to repair and reinstall streetlights along the major highways of St. Croix.

o On St. Thomas, additional customers on Feeder 6A were restored, as well as customers in Anna’s Retreat on Feeder 7C and along Crown Mountain Road. Crews continued the reconstruction of primary circuits along Mahogany Run toward the Magens Bay road intersection, and on Feeder 7A in Estate Altona.

• On Wednesday, restoration work impacting traffic flow will take place in the following locations: on St. Croix, along Queen Street in Frederiksted, along Queen Mary Highway from west airport road toward the court, and near Five Corners. On St. Thomas work will slow traffic in the area of Louisenhoj Castle toward Magens Bay road, along Weymouth Rhymer Highway, and from Mahogany Run toward the Magens Bay road intersection. On St. John, crews will continue to build primary circuits from Cruz Bay to Coral Bay with other crews working from Coral Bay toward Cruz Bay.

• WAPA advises residents that it is necessary to shut off standby generators when line crews are in your neighborhood restoring electrical service. A standby generator has the potential to back feed electricity to the grid which poses a severe safety risk to restoration crews.

• WAPA reminds the public that a precautionary boil water notice, for potable water customers, is in place for the District of St. Croix. Due to a drop in water pressure, as a precaution, we advise that all water used for drinking, cooking, making infant formula or juices, making ice, brushing teeth, washing fruits or vegetables and washing dishes, be boiled. Bringing water to a rolling boil and maintaining for one full minute is sufficient. Water must be adequately cooled before it can be used and should be stored in clean, covered containers. As an alternative, bottled water certified for sale by the Department of Health may be used. The boil water notice for the St. Thomas-St. John district has been lifted.