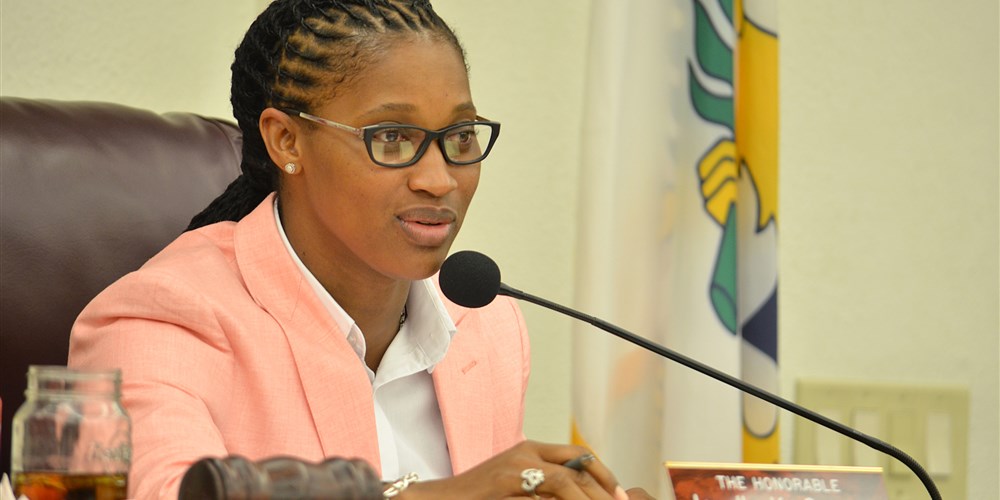 CHARLOTTE AMALIE — Janelle K. Sarauw, 32, is the youngest female senator in the U.S. Virgin Islands and is thought to be the legislating body’s only openly LGBTQ lawmaker.

After a successful campaign focused on government accountability and transparency, the St. Thomas native was elected in an April 2017 special election.

“She has devoted her life to her community — whether it be coaching girls’ volleyball, teaching history in Charlotte Amalie High School or political science in the University of the Virgin Islands, or fighting for minorities and disadvantaged people in our community as a senator,” Julian Bishop, who said he has worked closely with Sarauw, told NBC News in his #Pride30 nomination email.

Bishop also applauded Sarauw for being a “passionate” LGBTQ public servant in the “socially conservative” U.S. Virgin Islands, where Bishop said “homosexuality and the LGBT community is often threatened.”

NBC News spoke with Senator Sarauw for NBC Out’s #Pride30 special and asked her about being an out lawmaker in the U.S. Virgin Islands and what she hopes to accomplish in her new role.

HOW DID IT FEEL TO BE ELECTED AS THE YOUNGEST FEMALE AND OPENLY LGBTQ+ SENATOR OF THE U.S. VIRGIN ISLANDS?

“We live in a conservative area, and there are gay people in government, but there is a ‘don’t ask, don’t tell’ policy, and I don’t want to live like that — I want to be free. There is someone behind me and before me who wants to be free to live their truth. Because of the stigma and how we treat people, they stray away from their real life goals. My intent is to not really give give people an option to like me or not. I’m going to tell you who I am and you’re going to respect in that regard.”

WHAT ISSUES ARE YOU MOST PASSIONATE ABOUT? WHAT IS ONE OF THE BIGGEST GOALS YOU HOPE TO ACCOMPLISH THIS YEAR?

“Passing more revenue-generating policy. My focus has remained on young people, job creation, housing crisis that we have and inspiring others.”

WHAT ADVICE DO YOU WANT TO GIVE TO YOUNG WOMEN IN THE LGBTQ COMMUNITY?

“Just be you, be authentic, make no apologies to who you are. If there’s something you want in life, work towards it. regardless in the mold that society has put you in — remember that you are enough. Work your butt off!”

WHAT DOES “PRIDE” MEAN TO YOU?

TIME TO SPEND! Gov. Mapp Says We Can Expend Our Way Into Hurricane Recovery

Mapp Says He Has Had Ways To Solve GERS Financial Crisis ... But Is Only Telling Us Now