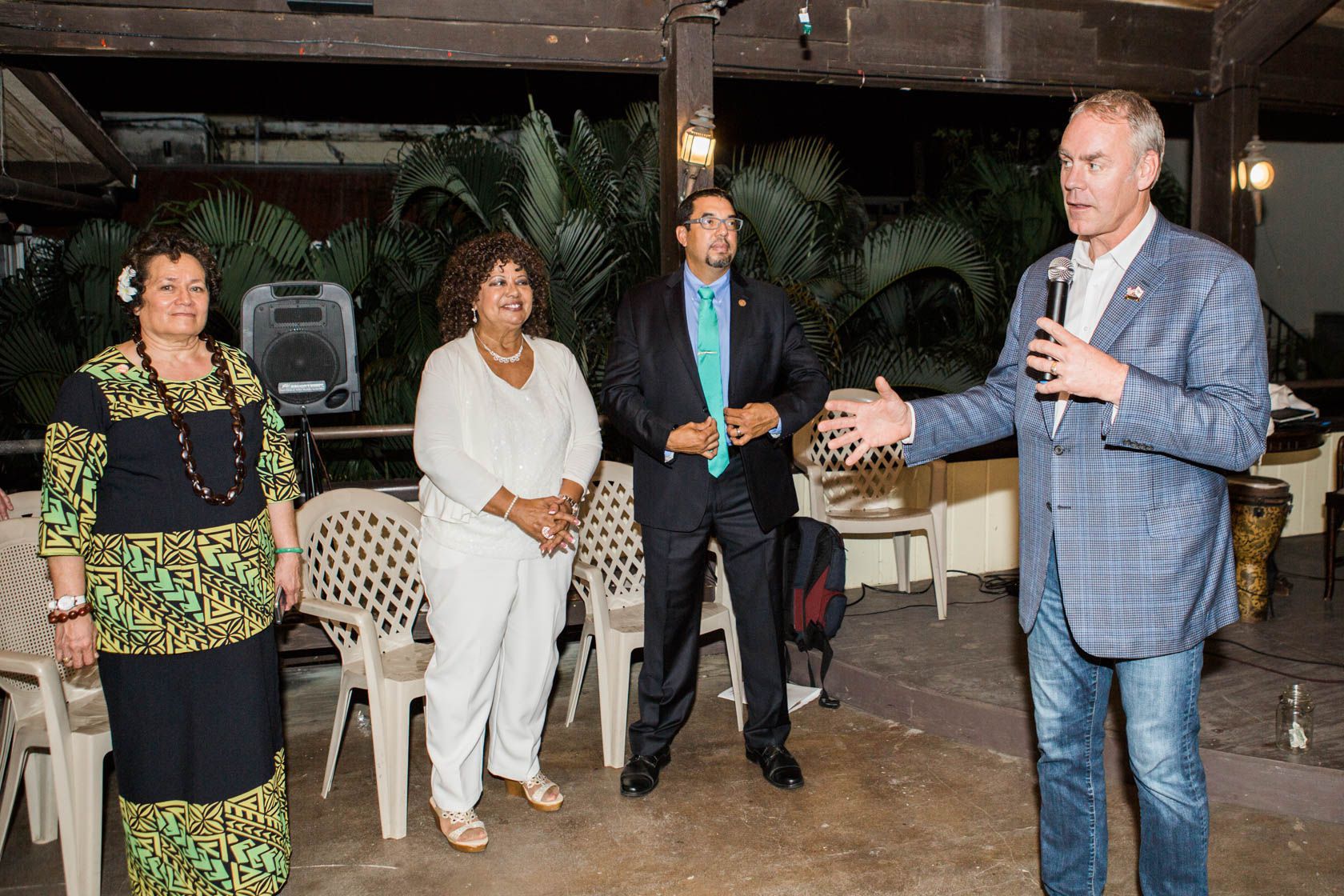 FREDERIKSTED — The top GOP official in the Virgin Islands suggested his fundraising group’s “behind the scenes” relationship with Interior Secretary Ryan Zinke helped influence the department’s response to last year’s hurricanes in the territory.

John Canegata, the head of the Virgin Islands Republican Party, said he had direct access to Interior officials after the storm thanks to money his group raised for Zinke, whom he described as a “close friend.” Zinke, a former congressman, has known Canegata since at least 2015, and the secretary was at a fundraiser for the VIGOP, as
the group is known, during an official trip to the islands in his first month in President Donald Trump’s Cabinet.

Interior officials acknowledged reaching out to Canegata, who also works for a major rum distiller in the territory, although they said it was part of a wider effort to contact business leaders based in the territory and Zinke did not call him personally. However, a representative of the distiller said Canegata was not involved in their relief efforts, and a spokesman for the Virgin Islands’ House delegate disputed Canegata’s involvement in the hurricane response.

The department expedited reimbursements of rum taxes as part of its response to the hurricanes, although it’s unclear whether Canegata’s connection influenced that decision. Interior has jurisdiction over U.S. territories including the Virgin Islands but not Puerto Rico, which suffered more extensive devastation.

Disaster response experts say it would be inappropriate for Canegata’s political connections to influence Interior’s efforts in the Virgin Islands.

“These are processes that are supposed to be transparent and supposed to be above the board,” said Eric LeCompte, executive director of Jubilee USA, an anti-poverty group that has been involved in hurricane disaster relief efforts. “So, it would not be something a political party would be part of.”

VIGOP is not a typical political party and faces frequent inquiries from the FEC to better explain its fundraising practices and expenses. Some critics, including past Republican clients, say the group bilks conservative donors with promises to fight Democrats while spending the bulk of its money on overhead instead of political advocacy. The
group spends the vast majority of its money on a small group of Washington-area political consultants who have also done work for Zinke’s campaign and leadership PACs.

Zinke was introduced to the VIGOP in 2015 by a Washington fundraising consultant who also did work for his campaigns, and as a member of Congress he has traveled to at least two political conferences in the Virgin Islands sponsored by the group, POLITICO reported last year. Zinke and Canegata are seen together during a prior trip in a photo posted to Facebook.

Canegata boasted about his Zinke ties in a televised appearance on WTJX Virgin Islands Public Broadcasting that aired last month but has not received widespread attention outside of the territory.

“We were in direct connection with the Department of Interior,” Canegata said in the broadcast.

While Canegata credited other officials with their part in aiding the island’s response, he said the pre-existing connection to Zinke was key.

“Obviously, we have our congresswoman, our governor doing their job,” Canegata continued. “But behind the scenes, trust me, a lot of telephone calls, a lot of maneuvering was going on because, I think, some of the relationships we built.”

The Office of Special Counsel on Tuesday closed its investigation into Zinke’s appearance at the Virgin Islands fundraiser in March 2017, finding that he had not violated the Hatch Act because he was there in his official capacity and VIGOP reimbursed Interior for its expenses. Interior’s inspector general also recently said the appearance at the
fundraiser was not inappropriate. It is unclear whether either of those investigations addressed any link between VIGOP and Interior’s hurricane response; both offices declined to comment.

Interior’s Office of Insular Affairs, which oversees the Virgin Islands, “reached out to dozens of local government employees as well as major private sector employers in the USVI to check their power status and to see how the office could help,” Interior spokeswoman Heather Swift said in an email. Canegata “was contacted by those Insular Affairs officials because he works for one of those major private employers, Cruzan Rum.”

Canegata, a supply chain specialist at the rum distillery, had no role in the company’s disaster relief efforts, according to Cruzan Rum human resources manager Ayanda Daniels.

“He wasn’t part of the coordination,” Daniels told POLITICO. “Maybe he had a conversation with someone in order to do something, but we had another team for company response.”

James Norton, a former Department of Homeland Security Deputy official during the George W. Bush administration, said it is important for disaster response efforts to be handled through the appropriate
channels.

“As a matter of proper procedure, it would only be appropriate for all federal actions to be dealt with solely with official authorities at the Department of Defense, Interior, Homeland Security, FEMA, etc., and those local officials on the ground,” said Norton, who is now head of the consulting agency Play-Action Strategies. “Anything other than
raising awareness and reaching out to get an update on what’s happening would be inappropriate, as a political party or other organization doesn’t have command and control authority, nor would they be the designated principal federal official on the ground directing rescue operations.”

A spokesman for Stacey Plaskett, the Democratic House delegate from the Virgin Islands, disputed Canegata’s version of events.

“I cannot honestly remember hearing them or seeing them do anything to that effect,” Plaskett’s spokesman Mike McQuerry said. “The congresswoman was the person here in D.C. that worked extremely hard during that time to get those funds to the Virgin Islands.”

Canegata did not respond to a request for comment this week.

Interior expedited reimbursement of $223 million in taxes on Virgin Islands rum imported into the mainland and provided a $567,500 grant to help with a post-hurricane finance audit. Other hurricane relief funds would have come from FEMA, an Insular Affairs spokesperson said.

Swift said Zinke did not personally reach out to Canegata.

“The only official in the USVI the Secretary called was Governor Mapp,” she said.