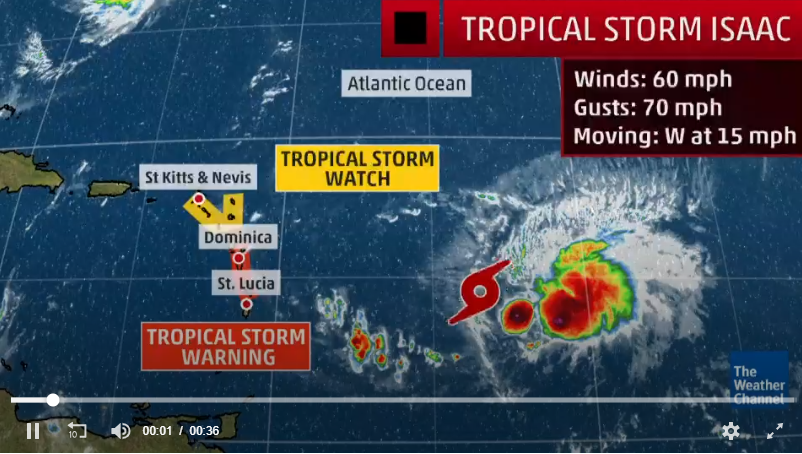 Authorities in Dominica are opening shelters and warning they will turn off water and power as a precautionary measure as Isaac approaches the eastern Caribbean.

Isaac has weakened but remains a strong tropical storm this afternoon.

Steered westward by high pressure to its north, Isaac is forecast to approach the Lesser Antilles Thursday into Friday.

A tropical storm warning is now in effect for Martinique, Dominica and Guadeloupe. A warning means tropical-storm-force winds (39-plus mph) are expected somewhere within the warning area within 36 hours.

The National Hurricane Center no longer thinks Isaac will be near hurricane strength as it nears the Lesser Antilles on Thursday, and a hurricane watch was dropped for the islands. Tropical storm watches and warnings continue, however.

According to the National Hurricane Center, as of 2 p.m. Wednesday Tropical Storm Isaac was located about 350 miles east of Martinique and was moving west at 15 mph.

Isaac’s winds fell to 60 mph. The hurricane center said gradual weakening is expected in the next few days as Isaac runs into wind shear.

A tropical storm watch is in effect for Antigua, Montserrat, St. Kitts and Nevis, Saba and St. Eustatius.

Forecasters said tropical storm conditions will be possible in the warning area by Thursday morning.

Where is Isaac heading? The hurricane center thinks Isaac will continue heading west for the rest of the week.

Isaac is a small storm, which makes intensity forecasting particularly challenging. Isaac is forecast to weaken as it enters the Caribbean because of increasing wind shear. It may not be able to recover from that and could dissipated altogether by Day 5.

Isaac’s path is still not set in stone, either.

“Although there remains a fair amount of spread in the models, the usually more reliable GFS and ECMWF models continue to show a westward motion during the next several days,” forecasters said Tuesday.

Forecasters said that an Air Force reconnaissance plane will investigate the system tomorrow “if necessary.”

Just in case: The next storm name on the list is Joyce. 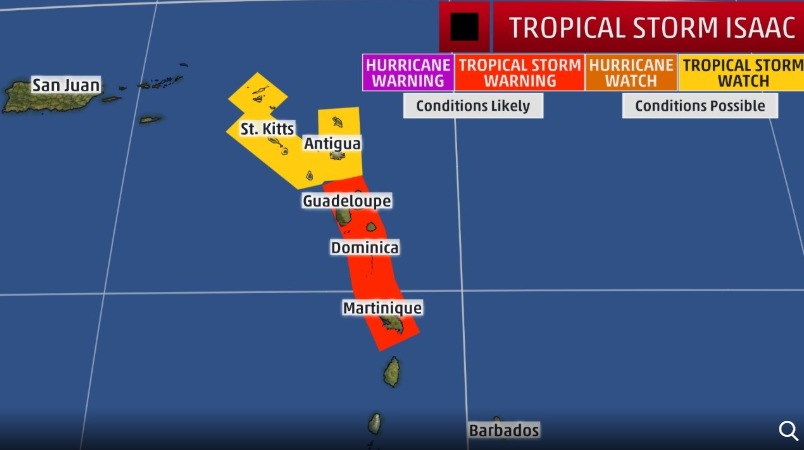 St. Croix's Roy Christian Admits In Court His Home Was A 'Grow House' in Frederiksted