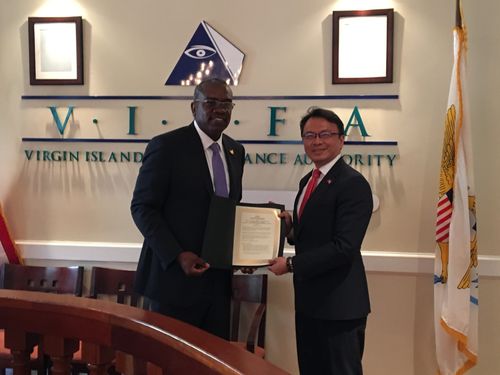 CHARLOTTE AMALIE — The U.S. Virgin Islands signed off on a reciprocal driver’s license agreement with Taiwan on Thursday, according to the Taipei Economic and Cultural Office.

The agreement, signed in the presence of Governor Albert Bryan, Jr. and Taiwan’s representative, allows licensed drivers from the Virgin Islands and Taiwan to apply for a license in each other’s territory without having to take a road test.

David Chien, head of Taiwan’s mission in Florida, said the arrangement with the V.I. Bureau of Motor Vehicles (BMV) will make life easier and more convenient for Taiwanese citizens living, working or studying in the U.S. territory and vice versa.

Bryan, who witnessed the signing ceremony between BMV and Taiwan at the Virgin Islands Housing Finance Authority (VIHFA) office at the
Demarara Plaza in Frenchtown,said he hoped the agreement will help attract more Taiwanese people to the island and promote local economic development.

Absent from the Thursday meeting was BMV Director Lawrence Olive who was fired by Bryan on Tuesday.

Although it was a meeting about the BMV, it was not held at the bureau’s Subbase offices, but at the VIHFA office in Frenchtown.

Government House has not publicly commented on the meeting.

Taiwan claims independence from China. The Republic of China says Taiwan is one of its island territories. Taipei is the capital of Taiwan.

Taiwan operates as an independent nation-state.

The Taiwan Capitalization Weighted Stock Index (TIAEX) is the most heavily-traded exchange in the world.

“So does the people in the V.I,” Keslah Williams said.

“Do we have a Taiwanese population in the USVI now?” Jerry Friday asked. “Maybe some VIers plan to move to Taiwan.”

“Must be a perk for the mega yachts?? Gerren Seabrook replied.

“Keslah Williams. I know that. That’s why I said not a good idea for both sides. That’s one of the biggest problems we have in the Virgin Islands instead of trying find solutions to fix the problems we are always ready to pick a fight which helps no one or the problem. Thank You. God Bless and help our people.” — Kenneth Moolenaar

“Jay Staxk. Well our problem is our little island has too many people and too many cars and too many driving with no license. Maybe it’s time yo go back to donkey.” — Kenneth Moolenaar

“Who the hell is going to Taiwan?” Lucia Hendrickson asked.

“Lucia Hendrickson we in a global world you not be going to Taiwan but another Virgin islander might be going so please we are all over the world,” Rumpel S. Tinskin said.

“What the hell? Nice to see the new administration has its priorities in order ?,” Joe O’Sullivan said.

“Whenever driving in a foreign country, new drivers should take all test. Heck, if locals have to take all forms of the driver’s test, then foreigners should too. That also goes for Virgin Islanders going to. Taiwan.” — Ben Roberts

“Why would that make things easier? If I have a driver’s license already, why do I need to apply for another one? If I don’t need to learn the rules of the road why can’t I just use my foreign license? Don’t you still have to be a resident to get a driver’s license? How would not need to know how to drive where I am be easier? Easier than what?” — Eva-Nzingha Moorhead

“This is what I call a waste of money. Please. This is not necessary. Now what? Are they all going to be headed to that country on our dime? This isn’t even in the top 50 for priorities.” — D Angela Cerge

“How many Virgin Islanders are living in Taiwan?” Berchel Smith asked.

“This shit don’t make no sense, because if you have a states side driver license you have to go through some much to get it change over to a VI License it’s a shame. — Cordeliawetwet Roach

“Where is the two million from the ID scam?” — Kathleen Brennan