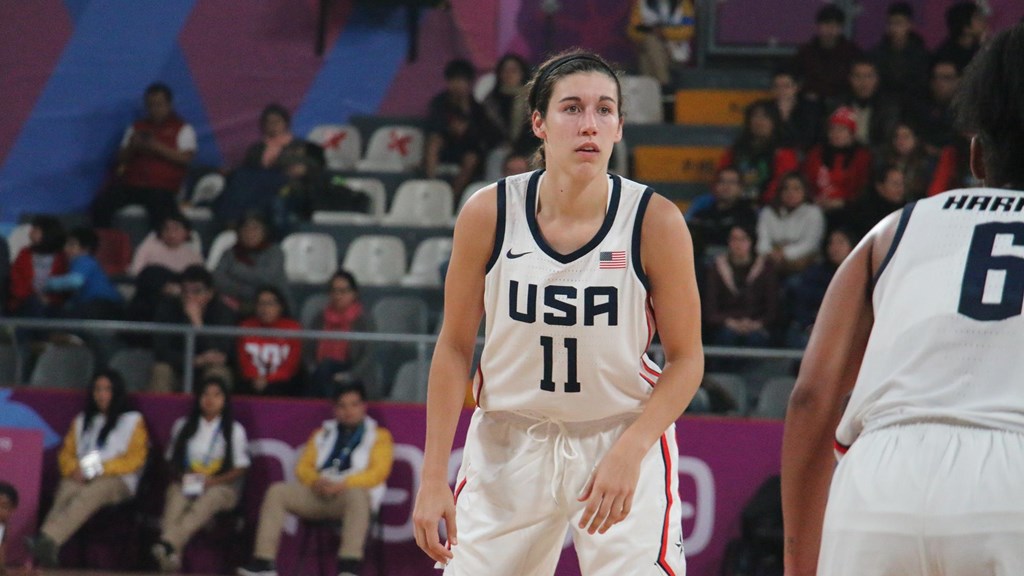 LIMA, Peru — A second-half comeback was unnecessary on Wednesday night for a U.S. Pan American Games women’s team, as the Americans built an enormous first-half advantage and cruised to a 103-55 win over the U.S. Virgin Islands in the second game of Group B play at the 2019 Pan American Games at Colisei Eduardo Dibos.

Current Wildcat Peyton Williams finished Wednesday’s game with 10 points on 4-of-5 shooting, six rebounds, three steals and two assists in just under 19 minutes of action. Williams was one of six U.S. players to score in double figures, led by Maryland’s Taylor Mikesell who came off the bench in the second half to score 16 points including a 4-of-8 effort from beyond the arc.

The U.S. Pan American Games Women’s Team (2-0) dashed out to a 10-4 lead in the first quarter to force an early U.S. Virgin Islands timeout. The USA would continue to pour on the points with a 24-6 run to hold a 34-10 lead after one quarter.

In the second quarter, the U.S., continued to race up and down the floor and outscoring U.S.V.I., 21-11, in the second frame to hold a 55-21 lead at halftime. The USA had a balanced opening half with nine of the 12 players scoring including Williams with two points. The U.S. was led in the opening 20 minutes by UCLA’s Michaela Onyenwere with 13 points and five rebounds. Onyenwere would finish with 15 points and six rebounds.

In the third quarter, Williams recorded two points, two rebounds and an assist in the frame. The U.S. would outscore USVI, 23-13, in the third stanza to increase its lead to 78-34.

In the final quarter, Williams notched six points and three rebounds as the U.S., captured the fourth quarter, 25-21, to provide the final margin.

The U.S. Pan American Games Women’s Team ends play in Group B on Thursday afternoon at 1:30 p.m., facing unbeaten Colombia. Colombia was the benefactor of “administrative negligence” by Argentina on Wednesday afternoon and won by a 2-0 forfeit.

Thursday afternoon’s game between the U.S. and Colombia will be streamed live on ESPN3.