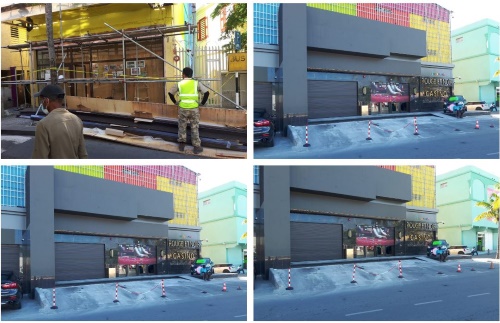 PHILIPSBURG — Rouge Et Noir Casino was ordered closed as of 1 p.m. on Wednesday by the Minister of TEATT Ludmilla de Weever since the establishment violated their ministerial decree which clearly states that they are not supposed to have an open entrance on Cannegieter Street in Sint Maarten.

Even though the decree issued by the former Minister of Tourism, Economic Affairs, Transport and Telecommunication prohibits the use of the entrance door facing Cannegieter Street the operators of Rouge et Noir went ahead and constructed an entrance that meets the road without a building permit from the Ministry of VROMI.

Recently a signboard was placed at the Cannegieter Street entrance inviting the public to enter the casino from that access point.

As first reported in the Sint Maarten Network News, De Weever ordered the shut down since the casino is in clear violation of the gaming policy that states that casinos cannot be located next to sensitive buildings such as schools, public library and doctors’ clinics all of which are in close proximity of the casino.

At the Philipsburg location on Wednesday, several workers who were sent home by government inspectors said that besides the use of the Cannegieter Street entrance the Chinese operators of Rouge et Noir are abusing their workers as they continue to employ undocumented persons from neighboring islands, like the Dominican Republic.

Minister de Weever said that she met with representatives of Rouge et Noir on Tuesday and notified them that will be closed because they are not operating within the confines of the Ministerial Decree they obtained.

De Weever said Rouge et Noir did not apply for any temporary permit to allow them to use the Cannegieter Street entrance.

The Minister of TEATT made clear that any business that does not operate within the confines of the law will be closed immediately with one day notice.

She said this goes for all Sint Maarten businesses and her decision was based on the law and not on human emotions.