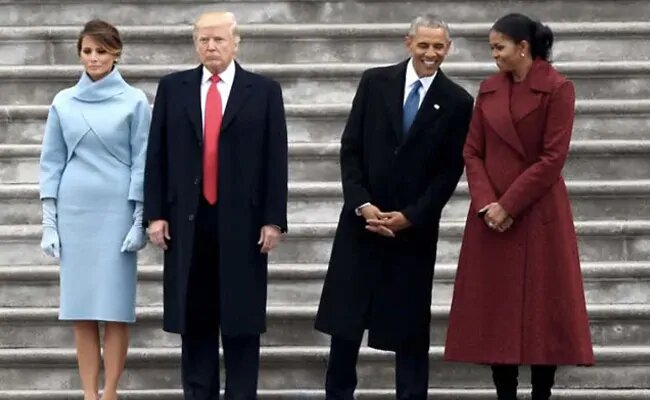 “I want to urge all Americans, especially our nation’s leaders, regardless of party, to honor the electoral process and do your part to encourage a smooth transition of power, just as sitting presidents have done throughout our history,” she wrote.

Michelle Obama recalled how she and her husband Barack Obama welcomed the Trumps to the White House, putting her own disappointment at the 2016 election result aside.

“I was hurt and disappointed-but the votes had been counted and Donald Trump had won,” she wrote, saying that the transition had not been easy for her but she respected the choice the American people made.

“The presidency doesn’t belong to any one individual or any one party,” wrote Michelle Obama.

She confessed that it had not been easy for her to welcome the Trumps to the White House, writing: “Donald Trump had spread racist lies about my husband that put my family in danger. That wasn’t something I was ready to forgive.”

In her post, she said it took “strength and maturity to put my anger aside” and recalled welcoming Melania Trump into the White House, speaking to her about her own experience of living and raising children there.

“We invited the folks from the president-elect’s team into our offices and prepared detailed memos for them, offering what we’d learned over the past eight years,” wrote Michelle Obama, comparing this to Trump’s refusal to ensure a smooth transition of power.

Donald Trump has repeatedly refused to concede the election, despite mainstream American media declaring Democrat Joe Biden as the winner after he crossed the mandatory 270 electoral votes out of the 538-member Electoral College.

“This isn’t a game,” Ms Obama wrote while concluding her post. “So I want to urge all Americans, especially our nation’s leaders, regardless of party, to honor the electoral process and do your part to encourage a smooth transition of power, just as sitting presidents have done throughout our history.”

Michelle Obama’s post has gone viral with over 2.7 million “likes” in a matter of hours.

“This is what we all needed to hear. Thank you for constantly being a beacon of hope to all of us,” wrote one person in the comments section.

“Beautifully said, thank you once again for being such a beautiful example of a leader in this country,” said another.

Donald Trump on Monday again refused to acknowledge his defeat by Joe Biden in the 2020 Presidential Election, tweeting, “I WON THE ELECTION!”