CHRISTIANSTED — A Crucian and a Texan will represent the U.S. Virgin Islands in the pool at the Tokyo 2020 Olympic Games.

This will be the third time that Kuipers has represented the U.S Virgin Islands in competition. She also competed in the 2018 Youth Olympic Games and the 2019 Pan American Games. Kuipers is now the third Bryant University athlete in school history to compete at the Olympics.

Adriel Sanes was born in Rosharon, Texas, but now calls the U.S. Virgin Islands his home. Kuipers was born in St. Croix.

Sanes most recently competed in the 2019-2020 season at the University of Denver, where he was named the 2020 Summit League Men’s Swimmer of the Championship. He was qualified to race in the 100 and 200 yard breaststrokes before that meet was canceled by the global coronavirus pandemic.

Sanes is the USVI Record holder in the 50, 100, and 200 meter breaststrokes in long course, as well as the 50 fly in long course and the 200 breast in short course.

The three long course breaststroke records were all set in April in Clermont, Florida at the UANA Tokyo Qualifier event. There, Sanes swam 28.31 in the 50 breaststroke, 1:02.41 in the 100 breaststroke, and 2:14.45 in the 200 breaststroke. His time in the 200 came within two-tenths of the Olympic “B” cut in the event, though he is ultimately a Universality selection.

The U.S. Virgin Islands Olympic Committee has fielded a team made up of four athletes to represent the territory at the Tokyo 2020 Olympic Games.

The Tokyo 2020 Olympic Games will begin on Friday, July 23rd, with the Opening Ceremonies.

Kuipers is a member of the Bryant University women’s swimming and diving team in Smithfield, Rhode Island.

She is the daughter of Anton Kuipers, the general manager of Treasure Bay V.I. Corporation, which runs the Divi Carina Bay Casino. 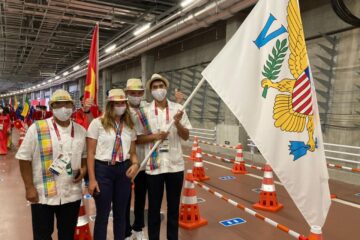