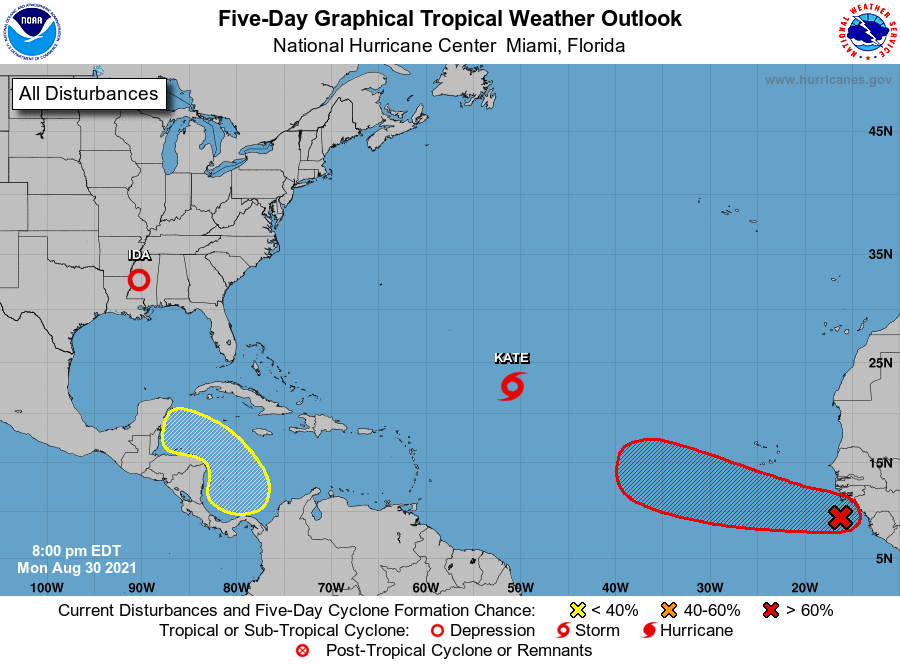 MIAMI — Tropical Storm Kate formed today in the Atlantic, hurricane forecasters said. It is one of four disturbances they are tracking, including Ida, which hit Louisiana as a Category 4 hurricane yesterday.

As of 11 a.m., Ida had weakened into a tropical storm and was moving northeast over Mississippi.

Tropical Storm Julian, which formed late Saturday over the Atlantic, had dissipated as of early today.

The next available storm name is Larry.

Here’s a look at the tropics as of noon Monday from the National Hurricane Center.

Tropical Storm Ida is moving over Mississippi and is expected to weaken into a depression Monday, forecasters said.

Rainfall from Ida will continue over parts of southeast Louisiana and southern Mississippi through Tuesday morning. An additional 4 inches are possible.

Storm total rainfall accumulations of 10 to 18 inches, with isolated maximum amounts of 24 inches, are expected.

On the forecast track, the center of Ida will move farther inland over Mississippi throughout the day. On Tuesday, it’s forecast to move across the Tennessee Valley tomorrow and then be near the central Appalachians on Wednesday.

Tropical Storm Kate over the Atlantic

Some slow strengthening is forecast by Thursday.

It poses no immediate threat to land.

Disturbance in the Caribbean

A broad area of low pressure is expected to form in the southern Caribbean Sea over the next several days, forecasters said.

It has a 20% chance of developing into at least a tropical depression within five days.

It should be moving gradually northwest at 5 to 10 mph over the western Caribbean.

Environmental conditions appear to be favorable for some slow development by the end of the week, forecasters said.

Disturbance in the Atlantic

A tropical depression is likely to form by the middle or later part of the week in the Atlantic, forecasters said.

A tropical wave is near the west coast of Africa and is expected to move over the eastern Atlantic later today. It’s moving northwest at 10 to 15 mph.

It has an 80% chance of developing into at least a tropical depression within five days.

If it strengthens into a tropical storm, it will most likely be named Larry.

The next available name is Larry. Systems are named when they strengthen into tropical storms.

Last year, there were so many storms that forecasters ran out of names and had to use the Greek alphabet. It’s only the second time in recorded history that the Greek names had been used.

Things have changed for this season. If needed, forecasters will use a list of supplemental storm names instead of the Greek names. See the full list.

The Atlantic hurricane season runs from June 1 through Nov. 30.

On the Saffir-Simpson Hurricane Wind Scale, the wind categories are: