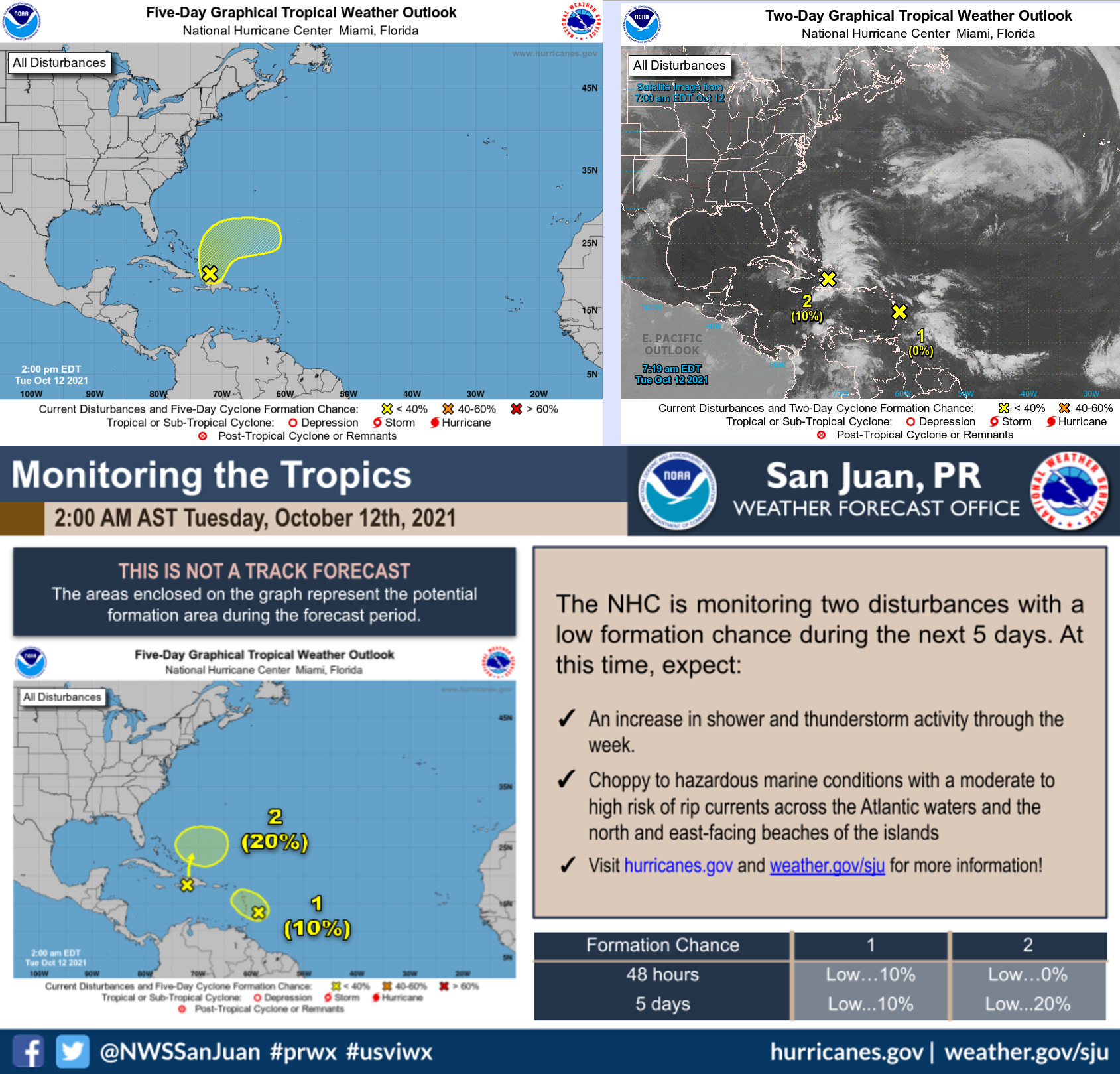 MIAMI — We still have two X’s on the board, but we don’t expect either of them to amount to much of anything.

Disturbance #1 is passing over the mountains of Haiti and the Dominican Republic. Heavy rain in the high terrain is the primary threat.

The disturbance is interacting with a sharp dip in the jet stream located over the Bahamas. The combo system is producing a large, disorganized area of thunderstorms over the island and the ocean waters east of the Bahamas.

Tomorrow plus or minus, a broad low-pressure system is forecast to form out of the mass of moisture. The energy to generate the system will come mainly from the jet-stream dip, however, not the warm Atlantic water. So it likely won’t be tropical, but instead just a garden-variety weak low-pressure area.

In any case, the system is forecast to get swept out to sea and not be of any consequence to land areas.

Disturbance #2 is going to move through the eastern Caribbean islands as just a moisture surge. Heavy rain and gusty winds are still possible on the affected islands over the next couple of days before the system gets swept out to sea as well.

These were always low-odds systems, but the water in the tropics is still plenty warm to invigorate and sustain a system, so we pay attention just to be sure the forecasts that the disturbances won’t develop are correct.

Elsewhere, nothing is showing in the long-range computer model forecasts through the weekend, and very little after that. Toward the end of this month, we’ll have to keep an eye on the western Caribbean. If anything is going to form, that’s the favored place for it to happen.

1. A tropical wave located near the Windward Islands has continued to become less organized this morning and development of the system is not expected. Locally heavy rainfall and gusty winds will be possible across portions of the central and northern Lesser Antilles today. * Formation chance through 48 hours…low…near 0 percent. * Formation chance through 5 days…low…near 0 percent.

2. The northern portion of a tropical wave is producing a large area of disorganized showers and thunderstorms across Hispaniola, the Turks and Caicos, and the southeastern Bahamas. Development of this system, if any, will be slow to occur during the next couple of days due to unfavorable environmental conditions. The system is expected to interact with a front by the end of the week and further development is unlikely after that time. Regardless of development, locally heavy rainfall is possible over portions of Hispaniola, the Turks and Caicos, and the southeastern Bahamas during the next day or two. * Formation chance through 48 hours…low…10 percent. * Formation chance through 5 days…low…10 percent.