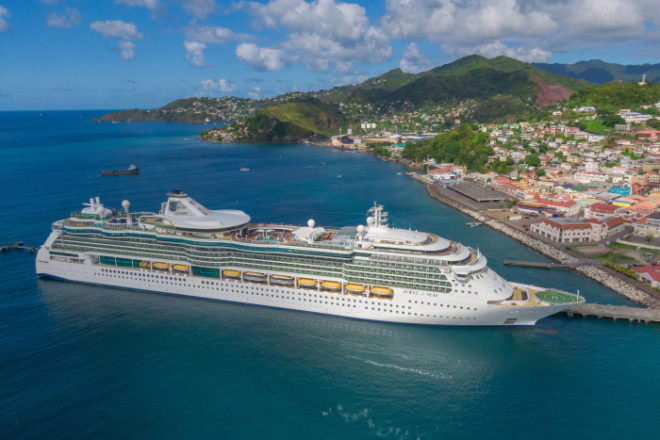 PHILIPSBURG — The Jewel of the Seas faced a dilemma Sunday.  After starting the day with fifteen crew members and five guests testing positive for COVID-19, ten additional crewmembers later tested positive for the virus. This brought the number of infected crew members to a total of twenty-five.

With five infected guests, the total number of infected people on the Royal Caribbean cruise ship increased to thirty, which is more than one percent of the ship’s population of 2,500 (consisting of 1,700 guests and 800 crew members).

Many Caribbean islands — including the U.S. Virgin Islands — will not permit cruise ships to stop in their ports if more than one percent of the total ship population (passengers and crew) test positive for COVID-19.

“We’ve already canceled at least one cruise ship visit to the Virgin Islands over the weekend,” Governor Albert Bryan said. “Yes, I wasn’t mainly eating ham and turkey, I was also working this weekend along with our health commissioner trying to control what’s going on. We have a Memorandum of Understanding with our cruise lines and if we get beyond one percent positivity — we shut it all down. They were at 1.19 (percent). We closed that opportunity to visit this port. We closed that down. I must say, that the infection rate was among the crew, not the passengers, so that’s good news.”

So Royal Caribbean faced the distinct prospect of being barred from making future ports of call. The company therefore made plans to avoid that spectacle by transferring a number of infected crew members from the Jewel to the Rhapsody of the Seas, which was at anchor off of Sint Maarten where the Jewel called Monday morning.

This information has been provided by a knowledgeable crew member on the ship who wishes to remain anonymous and employed on the ship. The crew member has provided accurate COVID-19 about this ship’s guests and crew members since last July when the ship was sailing from Cyprus.  The crew member explained that the crew transfer was done “in order to reduce the number of COVID positive persons on board in order to be able to continue cruising and stopping at the next port of call.”

This particular situation has not yet been reported in the national media. But there are several cruise ships which have recently been denied permission to call at ports in the Caribbean.

In the last week as the Omicron variant soared and spread across the cruise ships, no less than six ports denied permission for cruise ships to dock. Bonaire, Curacao, St. Thomas, Aruba, Puerto Vallarta, Cartagena and San Juan have all barred cruise ships from docking at their ports due to the presence of COVID-19 positive guests and passengers on ships operated by Royal Caribbean, Carnival and Holland America Line. A number of news sources have commented on the steps taken by ports in the Caribbean and Mexico to protect their residents from U.S. based cruise ships with infected people aboard.

At the COVID-19 press briefing at Government House on Monday, Governor Bryan and Health Commissioner Justa Encarnacion admitted that two cruise ships had been denied a berth in St. Thomas for exceeding the one percent infection rate aboard their vessels. But government officials did not name the two cruise ships involved.