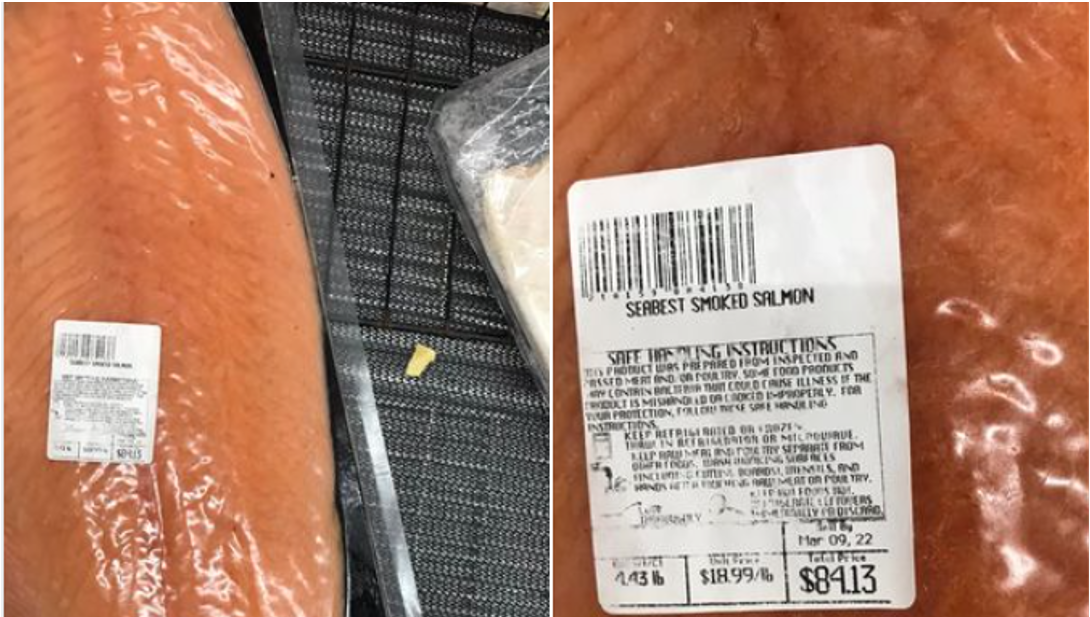 CHRISTIANSTED — Nobody has to tell anyone living in the U.S. Virgin Islands that you pay high prices at the supermarket here.

But $84.13 for less than five pounds of smoked salmon? C’mon man. You’re killing us with the high prices here!.

Tan Tan, who lives in Christiansted and posts on Facebook, said he found that price at “Plaza” but does not say if he means Plaza Extra East in Peter’s Rest or The Market in Estate Plessen.

According to the packaging, the smoked salmon is less than 4 and 3/4’s pounds of “Sea Best,” which The Market says on the Internet that it sells.

Either way, Tan Tan does not particularly appreciate that price and said so by creating his own hashtag for Plaza: “#PlazaAyoReallyWickedBadYa.”

Some Virgin Islands Free Press readers suggested that there a more sustainable solution by turning to locally-caught fish.

“Tan Tan best pull out the smoker and fishing rods!” Josefa Carrillo said. “How much was that Lox Bagel yielding for a profit? $15?We must do better or just leave that stuff at the store. And it probably got shipped in months ago……Best to just buy from local farmers and cater your palate around what’s locally available from the smaller vendors and farms. No Pun intended to any Business. But They having a hard time selling and We can’t really afford to buy.”

“Eli Torres you continue to ask the same question? No one cares,” Maria Colon said. “Election is in a few month! We the people have the power to make changes. We just need to make them!!!!!!

“Joan Keenan it also depends on where the salmon was caught. It could be ‘Copper River Salmon,’ which is never cheap,” Teddy Boschulte replied to Joan Keenan.

It used to be decades ago only Washington, D.C. had higher food prices in the United States than St. Croix, St. Thomas, St. John and Water Island.

Now, D.C. has been edged out by Hawaii and Alaska. But the King of High Food Prices remains the territory we all live in — the USVI.