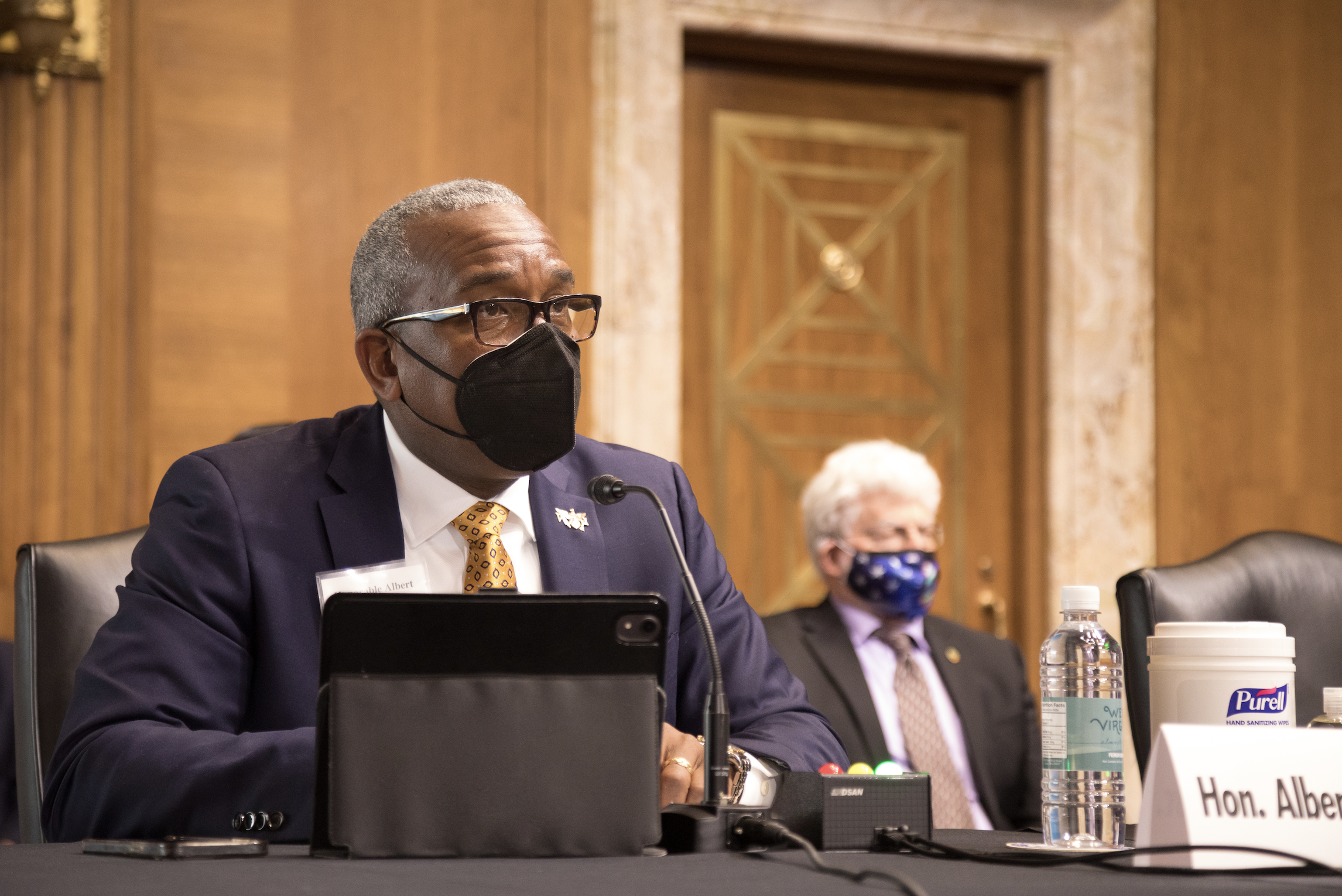 WASHINGTON — During a congressional hearing to examine the state of the territories, Senate Energy and Natural Resources committee chairman Joe Manchin of West Virginia told Governor Albert Bryan that he will help with Governor Bryan’s request that the territories’ bond offerings are guaranteed by the backing of the federal government.

A guarantee of backing by the U.S. Treasury would greatly assist the territories to realize significant savings when negotiating new bonds or refinancing current bonds at more favorable interest rates.

“All of us go through precarious financial situations. If this body would allow the Treasury to give us an option to back our bonds with full faith and credit just for the small territories, that’s an option that would have to be approved by Treasury, that move alone would just reduce the amount of debt level,” Governor Bryan said as the Senate committee hearing drew to a close. “We can go to the bond market, we could refinance that debt at AAA and probably save, for us, at least 10 percent in annual payments from our budget and redirect that towards doing things for our people.”

Senator Manchin noted that the territories’ bonds are based on their liquidity and not the full faith of the federal government and the U.S. Treasury.

“That’s something; I would be absolutely happy to look into that. That makes a lot of sense,”  Committee Chairman Manchin said. “We want you all to succeed. We want to help you. We really do.”

Senator Manchin then polled his colleagues and the committee agreed to send a bipartisan letter to the Treasury asking the agency to provide an understanding of why it has not “backed our territories with the full faith of the U.S. Treasury.”

To view the full hearing, go to the Senate Energy and Natural Resources webpage.

In his other testimony before the Senate Committee, Governor Bryan urged committee-members to consider allowing a waiver on the local match requirements that add constraints to the Territory’s ability to access federal funding and assistance that has been appropriated to the USVI by Congress.

Governor Bryan also said federal tax policy has imposed significant constraints on the Territory’s ability to attract private investment, because the tax code treats U.S. investments in its own territories as foreign investments, making them subject to taxes designed to discourage American companies from stashing profits in foreign tax havens, such as the Cayman Islands.

“The U.S. Virgin Islands is neither foreign nor a tax haven. It is a U.S. territory whose tax laws are promulgated by Congress,” the Governor said. “Treating us like a foreign country makes no sense and is contrary to decades of Congressional policies intended to encourage U.S. investment in the territories. I respectfully ask for your support in reversing this inequitable treatment.”

The Governor also told the Senate Committee that the closure of the Limetree Bay refinery cost the USVI 800 jobs and $633 million in reduced GDP.

“We all share the EPA’s concern with safety, but it is not clear that the EPA understands the unique importance of the refinery to the economic, financial, and social well-being of the Virgin Islands community,” Governor Bryan testified. “Environmental justice is a hollow victory without economic opportunity. I therefore ask for Congress’s assistance in working with the Territory and EPA to ensure that the refinery is permitted to responsibly and safely reopen as soon as possible.”

The Bryan-Roach Administration is investing in the Territory’s people, infrastructure and future through transparency, stabilizing the economy, restoring trust in the government and ensuring that recovery projects are completed as quickly as possible. Visit transparency.vi.gov