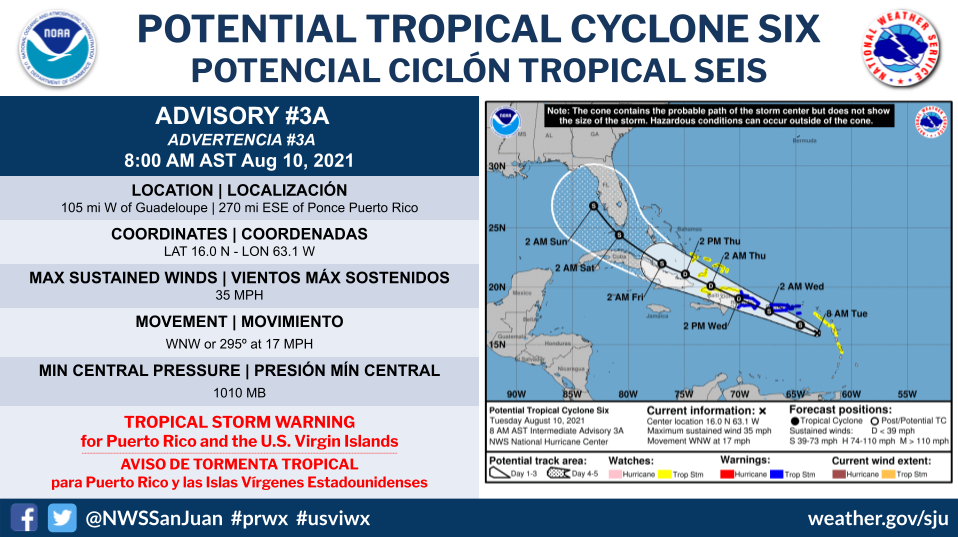 MIAMI — A disturbance in the Caribbean is expected to become Tropical Storm Fred today and bring needed rain to the U.S. Virgin Islands and Puerto Rico, the National Hurricane Center  said.

The storm, currently named Potential Tropical Cyclone Six, moved through the southern Leeward Islands overnight and was located about 270 miles east-southeast of Ponce, Puerto Rico, as of 8 a.m. ET, according to the center A NOAA hurricane hunter aircraft was en route to the disturbance.

“The most important thing today is preparation,” said Puerto Rico Governor Pedro Pierluisi. “I am not going to minimize the potential impact of this event…we expect a lot of rain.”

The chance the system becomes a tropical storm is high at 90 percent through 48 hours and through the next five days, the hurricane center said.

Heavy rains are likely over the Leeward Islands, Virgin Islands and Puerto Rico, which could lead to flash, urban and small stream flooding and potential mudslides. The greatest threat for flooding impacts will be across the eastern and southeastern portions of Puerto Rico.

Tropical storm conditions are possible elsewhere along the northern coasts of the Dominican Republic, northern Haiti, the Turks and Caicos and the southeastern Bahamas beginning late Wednesday.