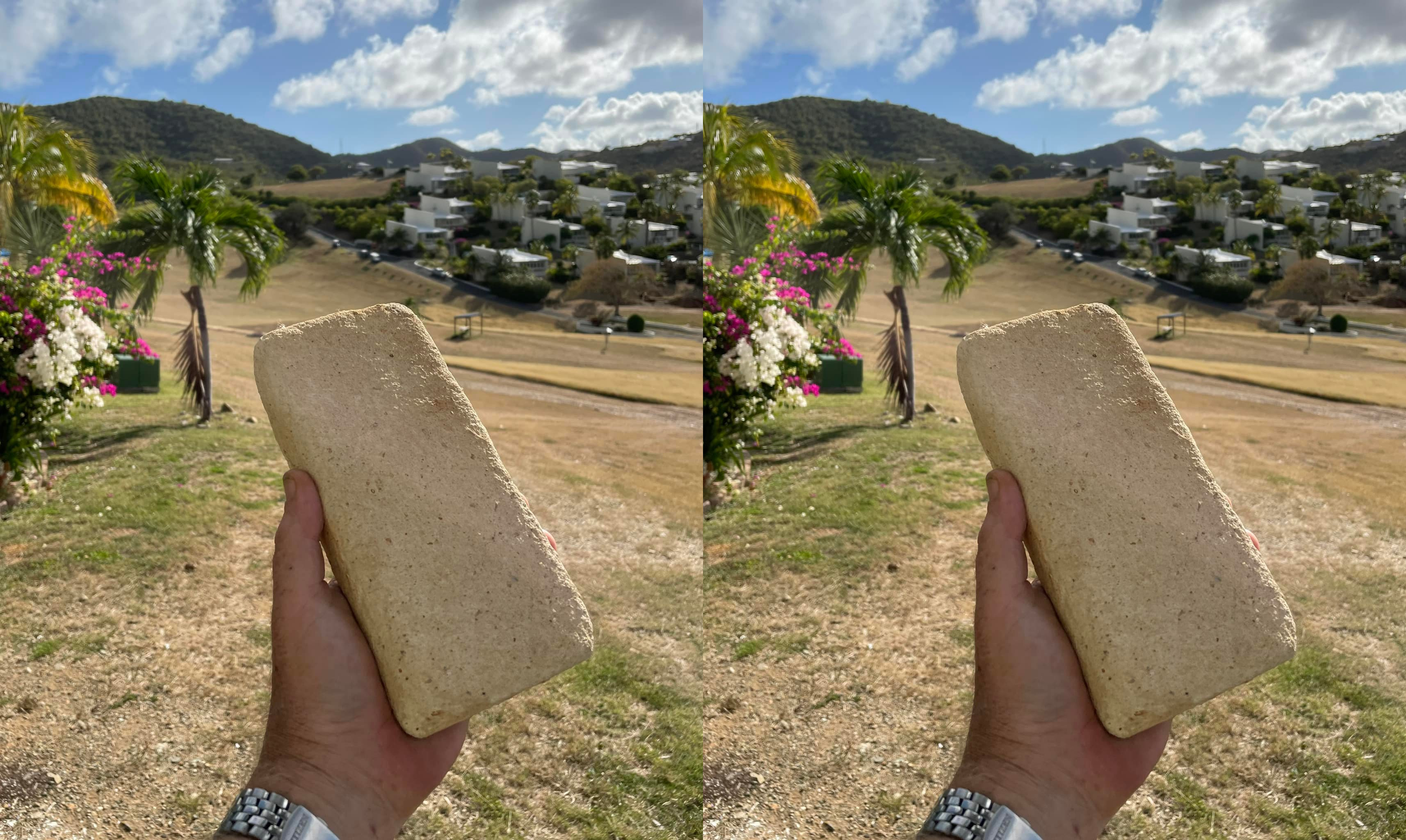 What’s worse, customers of Liberty Mobile say that they were never told that they had to inform the long distance carrier in writing within one month of sign-up that they intended to take their phone number to another carrier.

In that way, customers who chose to leave Liberty Mobile, but failed to notify them of their intent to keep their phone number — are forbidden by Liberty from taking their assigned phone number to a new long distance carrier after they fire Liberty.

Liberty Mobile customer Steve Kinney on St. Croix posted a meme to the private Facebook group “STX Utility Outage Reporting” on April 7 comparing his cell phone to a rock — because he said the stone had the same connectivity of his Liberty Mobile phone — none at all!

“Actual photo of my iPhone not connecting to the visible Liberty cell tower on the distant ridge line,” Kinney said firmly tongue-in-cheek.

“I need PR Liberty USVI to hurry and restore power my God my phone is that brick in truth,” Marisol Marie Ventura agreed with Kinney.

Customers of Liberty Mobile, which acquired Broadband VI in 2021, have also experienced inadequate download speeds and at times a complete lack of connectivity. And they will continue to experience these issues until the company completes a laundry list of impending projects hung up in bureaucratic red tape, according to testimony during the Senate Committee on Housing, Transportation, and Telecommunications on Monday.

Bala Balakrishnan, general manager for Liberty Mobile in the Virgin Islands, told committee members that the company has “been trying” to execute a plan which adds nine sites to “cover the gap” in several locations around the territory to include Coral Bay on St. John, Tango and Donoe on St. Thomas, and Sion Farm, Clairmont, Green Cay, East End, West End, and Sally’s Fancy on St. Croix.

But “unfortunately, it has been very difficult and complex to work with the different government and public authorities to lease the necessary location to erect cell sites needed to address the coverage and capacity issues,” Balakrishnan said. “For example, Coral Bay, Fortuna and East End. We are ready to invest in the territory, but we need your support in deploying the network and getting a speedier way to get these leases, and agreements approved and signed.”

Senate President Donna Frett-Gregory, a non-committee member, said there was “no specificity” in the direction the company was going and how long it would take to get there as officials estimated the projects would be complete sometime in 2022 or 2023.

“It sounds like we are going to be suffering with this situation that we have with our mobile services. I’m not hearing from you that you are satisfied, or you are comfortable, or in a position to say we are almost at the winning line, the end of the road with this,” she said. “It sounds like it continues to be a struggle and while we are continuing to have this struggle our service here sucks, it’s horrible.”

While many improvements made by the company aren’t immediately evident to the consumer, Balakrishnan said they do exist. The company’s latest speed tests demonstrate that Liberty is showing improvements of upward of 100 percent on average download speeds, it has deployed 5G mobile speeds in over 60 percent of its sites, completed 19 projects last year, and completed the trenching and preliminary work for Liberty’s fiber deployment project for the mobile service.

Still, like much of the community, senators were disgruntled by the company’s service, prompting Sen. Marvin Blyden to ask if there was anything that could be done in the interim to alleviate the complete lack of reception in places like Coral Bay.

“One of the things we are trying to do right away is to add capacity. We have identified a preliminary investment that we are reviewing and if we do that it will mitigate some of the dropped calls,” Balakrishnan said.

“The second thing we are trying to do, specifically in areas where you’re not able to get the connection in place, is to see if we can implement small cells,” according to Balakrishnan, but the company is still navigating the regulations and assessing the feasibility of the idea.

Should the company be able to expedite the deployment of the small cell sites, Balakrishnan said it will also help but as he and many of his colleagues pointed out the red tape surrounding lease agreements for such sites has been difficult.

Some sites which Liberty has attempted to procure through the Property and Procurement Department for the use of erecting cell towers have taken nearly two years of negotiation with no solution, according to Sen. Kurt Vialet.

Liberty officials agreed there was a need for legislation and appealed to senators for help in navigating lease agreements to create a swifter process.

Naji Khoury, president and chief executive officer of Liberty Puerto Rico and the Virgin Islands, said “it might have been a bumpy road getting here but the future is bright and I think we have what it takes.”

In addition to Blyden and Vialet, other members present were Senators Dwayne DeGraff, Janelle Sarauw, and Genevieve Whitaker. Sens. Steven Payne Sr. and Samuel Carrion were absent. Other non-committee members, like Frett-Gregory, also were also present for the hearing.

The Daily News contributed to this report.